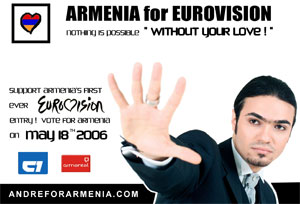 and exchanged a maximum score of 12 points at the Eurovision-2006 Song Contest. It is noteworthy that Armenian singer received 10 points from Turkish pop music fans (read the comment of Turkish journalist Baris Sanli at the end of this article).

The 52nd Eurovision Song Contest will be held in in 2007, The Finnish Lordi group won the 51st contest that ended on 21st May in . Their song “Hard Rock Hallelujah” received the total score of 297 points.

Dima Bilan from was voted second best by receiving 243 points. The Khara Mata Khari group from that presented the “Leila” song ranked third.

24 countries took part in the contest. Out of that total, 14 had been included automatically and 10 were rated by the TV audience during the semifinal vote.

The contest final was staged in an indoor stadium in . 14, 000 people were watching the show inside the stadium, and millions around the world saw it live on TV.

Having first entered the Contest in 1961 waited 45 year for their first win. Lordi?s score of 292 represents 66% of the possible points available from 38 countries, a new record for total score. This year has shown how countries without any ?voting friends? can win – and win handily. But the next three songs in the final tally all have something of a reputation for benefiting from voting blocs. Among the seven former Soviet Union members, none gave less than 10 points. No country can win the Eurovision Song Contest without garnering support beyond its neighbours and friends. ?s win is one for the record books. It shows that smaller countries can win the Contest with a great song and performance.

Baris Sanli, a Turkish journalist writing in “The Journal of the Turkish Weekly” comments on the 10 points the Turkish viewers granted in the Eurovision contest as follows:

Good news is we just gave 4 points to and they gave a miserable 3 points to us. That means we are still enemies, so my columnist career can survive. Bad news is, and it is really bad, we gave 10 points to . Read it: has given 10 points to . What is happening? You lazy Turkish viewers, learn something from the holy Armenians, don?t you! No points to . That is the enemy spirit. Well done boys!

This year?s Armenian song and last year?s Greek song were having more Anatolian sounds than the Turkish songs of these years. Last year, the Greek song was popular in even months after the Eurovision final. Don?t get surprised, if Armenian song repeats that.

… the Anatolian-familiar sound was the dominant effect, I guess. It is this familiar sound and Turkish people?s good intention – which I lack because I was sleeping during the contest – that awarded 10 points to . Now reverse the previous sentence and it explains the 0 points that generously gave to .

As a result, I am proud of my fellow citizens and not very proud but fine with the Turkish song. Turks has something that most of the world needs now. As (lazy) Turkish viewers demonstrated last night, Turks have the positive attitude and constructive efforts that is nearly extinct in this world. Maybe Turks are not good song writers or performers, but still Turkish people have better intentions to build a peaceful future for the next generations. That is what I was proud of, this morning.

END OF THE COMMENTS OF THE TURKISH JOURNALIST

(read the complete text at: http://www.turkishweekly.net/baris.php?id=164)

Azad-Hye would like to comment that if granting 10 points to Armenia shows “Turkish people?s good intention” and their “positive and constructive efforts that is nearly extinct in the world” and if this indicates also “better intentions to build a peaceful future for the next generations”, then it would not be hard to demonstrate these values in other forms.