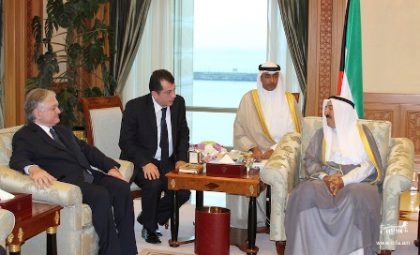 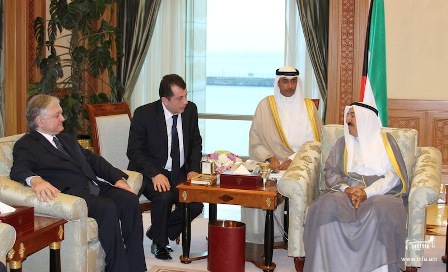 Kuwaiti authorities will provide humanitarian aid to the Syrian Armenians

On 19 November 2012 Armenian Minister of Foreign Affairs Edward Nalbandian arrived at Kuwait for an official visit.

In the morning he was received by the Emir of Kuwait Sheikh Sabah Al-Ahmad Al-Jaber Al-Sabah. Nalbandian reaffirmed the Armenian President's invitation to the Emir to visit Armenia. The sides mentioned with satisfaction that the embassies of both countries were opened in Yerevan and Kuwait, and an inter-governmental commission is currently functioning.

Sheikh Al-Sabah praised the Armenians living in his country, stressing their contribution to the prosperity of Kuwait. Edward Nalbandian expressed gratitude for warm and caring attitude provided by the Kuwaiti authorities towards the Armenian community and in supporting the construction of the Armenian Church in Kuwait. They exchanged views on the developments in the Middle East as well.

Meeting with Prime Minister of Kuwait

During the meeting with Prime Minister Sheikh Jaber Mubarak Al-Hamad Al-Sabah, the sides discussed the preparatory works of the second session of the Inter-governmental Commission. They exchanged views on the possibility to organize business forum in order to enhance bilateral trade and economic cooperation.

Meeting with Deputy Prime Minister and Minister of Foreign Affairs

During the meeting with Deputy Prime Minister and Minister of Foreign Affairs Sheikh Sabah Khalid Al-Hamad Al-Sabah, Nalbandian said that Armenia attaches great importance to the development of relations with Kuwait. The two officials discussed ways for implementing the agreements reached between the heads of the two states during the visit of President Serzh Sargsyan to Kuwait in 2009.

Talking about the recent events in Gaza, Nalbandian said, “Armenia, as well as the international community are deeply concerned about the increase of tensions in and around the Gaza Strip. The use of force which has resulted in dozens of casualties amongst the civilian population is seriously damaging already quite fragile regional situation. It should be put an end to the use of force or threat of use. We firmly believe that there is no alternative to a settlement through peaceful negotiations.”

Nalbandian expressed his concern over the situation in Syria, as well, mentioning that due to the conflict Armenia is continuing to accept thousands of Armenians living in Syria. In that context Kuwaiti Minister of Foreign Affairs informed about the decision of the Kuwaiti authorities to provide humanitarian aid to the Syrian Armenians.

Nalbandian had talks also with Nayef Falah Al- Hajraf, the Kuwait's Minister of Finance and the head of the Armenian-Kuwaiti Inter-governmental Commission. They discussed the outcome of the first session of the Commission held in Yerevan last year and the details related to the upcoming session to be held in Kuwait in the first half of 2013. Nalbandian visited also the Kuwait Fund for Arab Economic Development where he had a meeting with Abdulwahab Al-Bader, the Director General of the Fund and discussed about ways of financing certain projects in Armenia.

At the end, Edward Nalbandian had a meeting with the Armenian Community in Kuwait, during which he presented the results of his visit, the priorities of Armenia's foreign policy and the steps undertaken towards the strengthening of the Armenia-Diaspora ties.

Sources: Kuwaiti media and the website of the Armenian Foreign Ministry (http://www.mfa.am/en/)

Newer PostPFA report: May 2012 elections in Armenia were fraudulent
Older PostPeter Jam: Peace is my religion