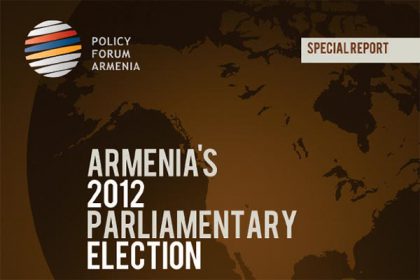 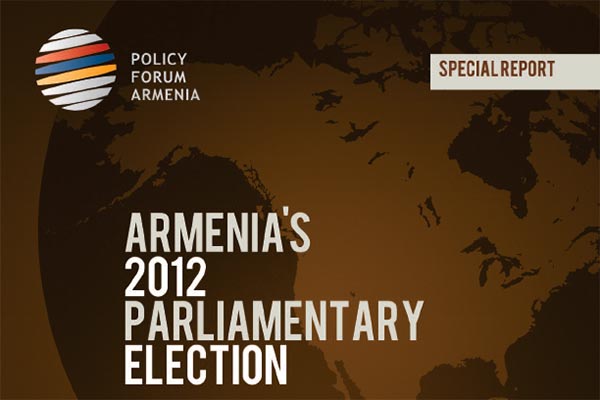 Policy Forum Armenia, an independent, non-profit association that helps in shaping public policy in Armenia, has released a report last week in which the 2012 Parliamentary elections in Armenia were described as largely fraudulent, where the election manipulations were “transformed into less obvious and observable forms”.

The report has based its findings on a series of statistical tests that are capable of detecting election fraud.

The report describes the irregularities that were noted on Election Day. The PFA team has reviewed “publicly available information and personal accounts of dozens of eyewitnesses, voters and proxies” to reach a conclusion that main unlawful acts were taken place on Election Day summarized as:

The report goes on to describe the response of the main opposition groups, the international and local election monitors, and the civil society to the election outcome.

The second half of the report deals with the statistical analysis of election data focusing on the voter list as a potential source of fraud and on the phenomenon of artificially enhanced turnout. The analysis shows several type of election fraud such as:

– Massively inflated voter lists and, as a result, participation rates, or turnout;
– Changing forms of fraud, with falsifications outside of polling stations becoming increasingly  common, including bribing, intimidation, and fictitious voting; and
– A significant amount of vote-counting falsifications, being especially pronounced in areas outside of Yerevan.

The above falsifications?conducted primarily in favor of the ruling party?are likely to have altered the outcome of the 2012 election.

The report ends with a series of recommendations, which we reproduce in full below:

To opposition parties and civil society

– The elimination of the “missing voters” issue should be made a priority. However, absent the political will to disclose the voter lists after elections (and given the Constitutional Court's position on the issue), an alternative solution should be pushed whereby citizens residing abroad and unable to travel to Armenia to vote should be allowed to withdraw their names from the local voting lists temporarily, on an election-by-election basis. The names of those who withdrew in such a way should be published to reduce the opportunities for tampering with the list.

– Disclosure of the voter lists in polling stations with a turnout above 90 percent (i.e., abnormally high) should be pursued. Not only this will provide more direct evidence of fraud in those polling stations and potentially beyond, but this will also to a certain degree prevent fraud and discourage corrupt election officials from approaching the 90 percent mark, knowing that they will be audited.

– While taking many forms, election fraud in Armenia is adapting to monitoring pressures. This puts a premium on a more candid observer assessment of election conduct, especially when it comes to commenting on the “elephant in the room”?the degree of sponsorship of election fraud from the highest level.

– Related to this is the need for better education of monitors about Armenia's political-economy landscape and history of election fraud.

– Resources permitting, more observers should be dispatched to areas outside of Yerevan, where evidence of fraud is much stronger than that in Yerevan.

– Given the level of challenges facing Armenia and the impact that clean elections could have on Armenia's future, providing funding for, and directly participating in, election monitoring efforts could be the best use of time and money. However, the involvement of Diasporan monitors should be done independently of traditional Diasporan structures, within which the regime's influence may still be significant.

Other in-depth reports issued by Policy Forum Armenia recently were devoted to economic policy and social conditions in Armenia; Armenia-Diaspora relations; the state of Armenia's environment, among others. These reports are available for downloading at www.pf-armenia.org/reports.

Download English and Armenian versions of the report from this link:
http://www.pf-armenia.org/document/armenians-2012-parliamentary-election