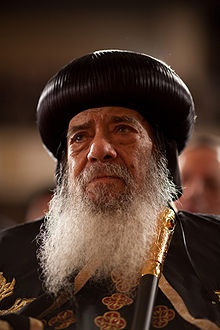 H.E. Mr. Edward Nalbandian made a note in the Mourning Register opened in the embassy on that occasion. In a conversation with Ambassador of Egypt Mohamed Alaaeldin Saad Elleissy, Minister Nalbandian said he had the honor to hold numerous meetings and conversations with Pope Shenouda III.

Edward Nalbandian expressed confidence that Pope Shenouda III will always remain in the memory of those who had the honor to know the distinguished religious leader, prominent intellectual and great Egyptian.

Note from Azad-Hye: Minister Edward Nalbandian served in Egypt from 1992 to 1998, first as charge d'affaires and then as Ambassador, before being appointed as Ambassador to France in 1999.

Pope Shenouda III (3 August 1923 ? 17 March 2012[1]) was the 117th Pope & Patriarch of the famed Church of Alexandria. His long episcopate lasted 40years, 4 months and 4 days (14 Nov 1971 – 17 Mar 2012). As Pope of the Church of Alexandria, he headed one of the most ancient churches in the world, a Church that traces its founding to St Mark the Evangelist who brought Christianity to Egypt during the reign of Roman Emperor Claudius ca 42AD.

Born Nazeer Gayed Roufail on the 3rd of August 1923, he became a monk in 1954 under the name Father Antonios the Syrian after joining the Syrian Monastery of the Ever-Virgin Mary the Theotokos, where he was later elevated to the priesthood. In 1962, Pope Cyril VI summoned Fr. Antonios to the patriarchate where he consecrated him General Bishop for Christian Education and as Dean of the Coptic Orthodox Theological Seminary, whereupon he assumed the name Shenouda, which was the name of a Coptic saint, Saint Shenoute the Archimandrite (b. 347/348 – d. 465/466), and two previous popes: Shenouda I (859?880) and Shenouda II (1047?1077). Saint Shenoute the Archimandrite was instrumental in flourishing the Monastic Movement, active in Ecumenical issues, a noted Church teacher and writer, and an Egyptian Leader. Pope Shenouda III maintained the legacy of the name he carried.

Pope Shenouda served as Pope and Patriarch of Alexandria since 14 November 1971, presiding over a worldwide expansion of the Coptic Orthodox Church. During his papacy, he appointed the first-ever bishops to preside over North American dioceses that now contain over two hundred parishes (200 in the United States, 23 in Canada and one in Mexico), up from four in 1971, as well as the first bishops in Australia and the first bishops in South America. Shenouda was known for his commitment to ecumenism and had, since the 1970s, advocated inter-denominational Christian dialogue. He devoted his writings, teachings and actions to spread and propagate for the rules of understanding, peace, dialogue and forgiveness.