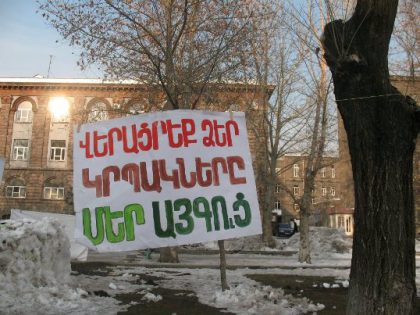 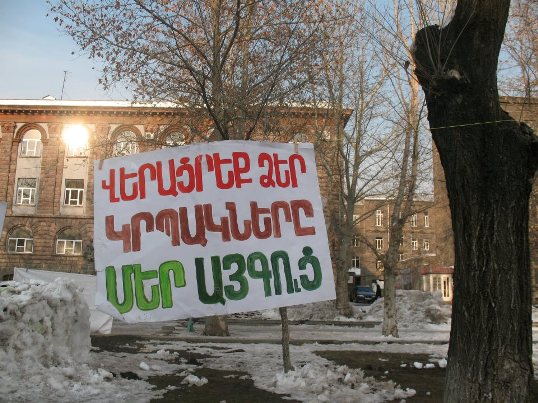 Yerevan's Mashtots Boulevard has become a place of confrontation between environment activists and city officials with plans of uncontrolled urban overdevelopment.

Taking advantage of the involvement of the activists in defending Teghut forest from illegal mining plans, city authorities tried to make a swift move to relocate a great number of kiosks to Mashtots Park, without making any previous announcements.??

They were surprised, however, to face a group of activist citizens staging protest against their move. The confrontation which took the shape of sit-ins under the snow, continued since early February 2012 with limited tension, but the danger of escalation has always been imminent.

The activists are planning now to dismantle the existing kiosks. Police authorities are warning that this can lead to law enforcement against their actions. According to the police the kiosks are considered private property and any violation would oblige interference.

The kiosks were originally operating in other locations in Yerevan and were dismantled and moved to Mashtots Park as part of a city beautification plan. The mayor Taron Markarian says that the relocation is to satisfy the owners of the kiosks who have existing contracts with the Municipality for three years. The activists do not believe that the kiosks will stay there for only three years.

Well-known filmmaker Tigran Khzmalyan, political activist Manvel Sargsian and many other activists addressed the Police Chief Vladimir Gasparian in a letter about their intention to carry the dismantling work on 31 March 2012.

In an interview with Azatutyun Radio Khzmalyan said: “This is not only action for dismantling these kiosks. It is clear to everyone that this is just an occasion, a symbolic deed. I am sure the police and the Yerevan Municipality understand this, too”.

Activist Manvel Sargsian said: “This is a form of peaceful disobedience, because citizens have the right and obligation not to obey illegal decisions”.

Mashtots Park today symbolizes the fate of public spaces in Yerevan and other cities in Armenia. Unchecked overdevelopment through the authorization of illegal constructions will lead into the stealing of spaces of vital need for public use such as courtyards, parks, sidewalks, pavements.

More and more supporters should join the plight of Mashtots Park.

A group of Armenians living in Denmark has issued this letter on 30 March 2012:?

With this letter we, Armenians of Denmark, convey our fullest support to your green activism. We are concerned with the complicated situation around the Mashtots Park, and Teghut forest and always follow the developments around these issues. We join your claim to stop the construction in the park, remove the trade booths and leave the park to its owners ? the residents of Yerevan.

We find it unacceptable and unlawful to use the public park in favor to the private rather than the public interests, even if it is said to be temporary. This is particularly alarming, because the green territories become more and more endangered in Yerevan, and in Armenia as a whole. We are well-aware of violations of law regarding the construction in the park, and condemn the police actions as being not legitimate. Meanwhile, your demands on stopping the process of construction and dismantling the booths are proposed within the framework of law.

On the other hand, we express our sincere appreciation for the civic activism of those people, mostly the younger generation, who are involved in the park initiative, express their voice and strive for a better, greener, more lawful country of concerned people, who prefer to sleep in an open-air park in winter, rather than remain impartial in their closed apartments. We consider this activism as a precedent and a good example of protecting public property and voicing out injustice. Undoubtedly, Mashtots Park case can be a good motivator to raise civic voice and feeling of public belonging in the society, which is so crucial nowadays.

We also address the international organizations in Armenia and diaspora groups to pursue the issue and express their support to the public activism. You are greatly involved with the development of Armenia, hence, you cannot be impartial, and not to follow what are your cooperation outcomes with different concerned structures in Armenia.

It was with great pleasure that we read about a $1.2 million grant to Armenia Tree Project (ATP) by the Norwegian Ministry of Foreign Affairs. However, we are concerned that while the Norway funding will provide partial support of an expansion of reforestation programs in northern Armenia, it is in the very same northern Armenia that the already existing massive and virgin forest of Teghut is being loggedfor the sake of mining industry that will benefit only a few, butharm the majority.

To conclude, we hope that the responsible authorities will make right decisions, and you will celebrate your deserved victory of voice very soon. 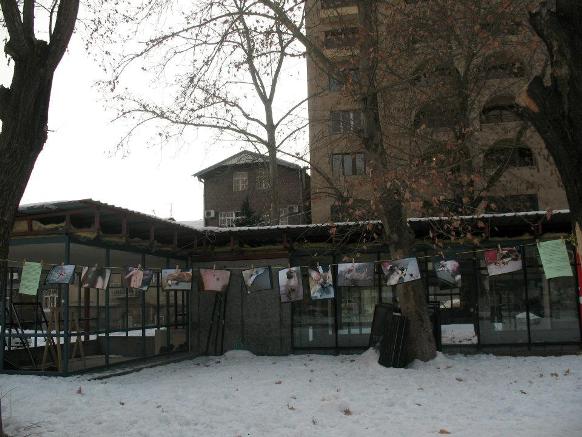