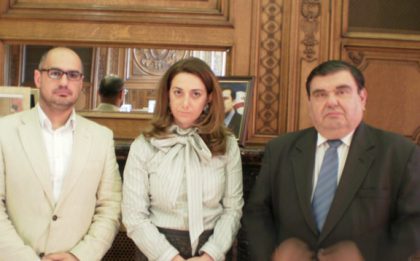 BRUSSELS?Leaders of the European Armenian Federation (ANC Europe) Wednesday met with Georgia?s Ambassador to the European Union for a briefing about meeting held with European officials and a leader of the Armenian community of Samtskhe-Javakheti (Javakhk) earlier this month.

Armenian National Committee of Europe chairman Kaspar Garebedian and the organization?s communication director Bedo Demirjian met with Ambassador Salome Samadashvili and briefed her on a series of meeting held earlier this month in Brussels between the coordinator of the Council of Armenian Organizations (NGOs) of Javakhk and director of the A-Info news agency Artak Gabrielyan.

The ANC Europe delegation also presented Samadavili with a Memorandum to the European Parliament, which details the issues facing Javakhk and highlights demands that have been put forth by the Council of Armenian Organizations (NGOs) of Samtskhe-Javakhk.

The ambassador was also informed that an ANC Europe delegation would be visiting Tbilisi in coming days to meet with European representatives in Georgia as a follow-up to Gabrielyan?s meetings in Brussels. The ANC Europe leaders also informed the ambassador of their intentions to meeting with Georgian officials to reinforce the serious nature of the Javakhk issue.

Samadashvili commended the delegation for its detailed briefing and pledged to share the ANC Europe?s concerns with the authorities in Tbilisi.

At these meetings, Gabrielyan introduced the plight of the Armenian community Javakhk, highlighting that his visit to Brussels comes as a result of the refusal of Georgian authorities to meet with representatives of the Javakhk Armenian community.

He also presented each person with a Memorandum to the European Parliament, which details the issues facing Javakhk and highlights demands that have been put forth by the Council of Armenian Organizations (NGOs) of Samtskhe-Javakhk.

The demands Samtskhe-Javakheti Armenians include:

1. Granting of autonomous territorial status (with its own directly elected assembly) to Samtskhe-Javakheti and the adjacent Armenian majority Tsalka district within a federal Georgia;

2. Allowing the use of the Armenian language in public administration in those municipalities―such as Akhalkalaki and Ninotsminda―in which Armenians make up a majority; an unfulfilled accession commitment Georgia undertook when it joined the Council of Europe in 1999, namely the signing of the European Charter for Regional and Minority Languages;

3. Social and economic development projects for the region to bring it up to par with the rest of the country;

4. Improved Armenian representation in local and state institutions; and

5. An end to social engineering by the settlement of ethnic non-Armenians from other parts of the country in Samtskhe-Javakheti.

Gabrielyan also stressed that the Council wanted the European Union and Europe, in general, to be engaged in this process and to urge its ally, Georgia, to properly address the issues pertaining to Javakhk.