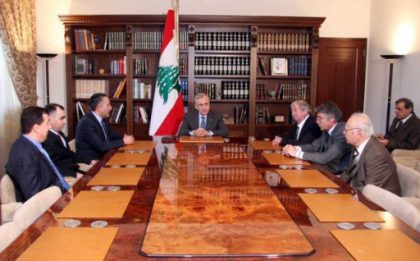 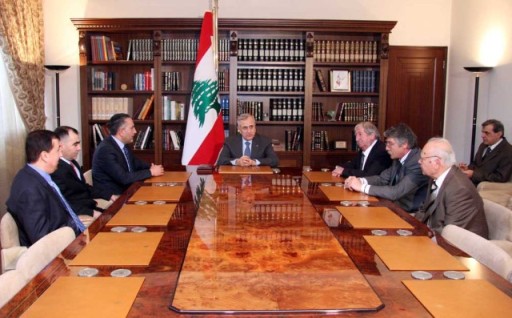 President of Lebanon Mishel Suleyman received Armenian intellectuals who are in Beirut to participate in the celebration dedicated to the 500th anniversary of Armenian printing and to the 115th anniversary of great Armenian poet Yeghishe Charents.

Among other participants of the meeting with the Lebanese President were state deputy of Lebanon Shant Chinchinian and First Secretary of the Embassy of the Republic of Armenia in Lebanon Vardan Adamyan.

Norayr Adalian and Levon Mutafyan presented the Armenian-Lebanese cultural ties. Levon Mutafyan informed about the translation of various Lebanese lyrical poems by poet Sarkis Giragossian and their release in Yerevan in 2011, the active cultural ties and particularly the large-scale efforts aimed at establishing close ties with the Lebanese-Armenian community.

Then, Levon Mutafyan conveyed greetings of Minister of Diaspora Hranush Hakobyan and handed the President the book entitled “Ani 1050”, which the President accepted with pleasure.

Writer Norayr Adalian handed President Mishel Suleyman his novel entitled “In the Black Squared Desert”, for which he has received the Republic of Armenia President?s Award.