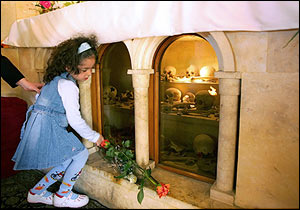 BEIRUT: The normally bustling streets of Bourj Hammoud were eerily silent on Tuesday as the capital's Armenian population marked the 92nd anniversary of mass killings of Armenians by the Ottoman regime. The majority of stores and restaurants in the predominantly Armenian area were closed for the day. Residents descended in their thousands on Antelias and Bikfaya, while a Mass addressing the Armenian nation was delivered by Aram I at the Armenian Catholicosate of Cilicia.

“The recognition of the Armenian genocide is not an end in itself, but is, indeed, an important step toward compensation,” Aram said.

Turkey's refusal to recognize the 1915 mass killings as “genocide” – a stance that has occasioned diplomatic fallout with Germany, France and other countries that have pursued legislation outlawing denial of the killings as genocide – is cause for an abiding, if not increasing, antagonism between Armenians and Ankara.

Turkey says that the killing of Armenians was the result of broader hostilities during World War I in which many Turks were also killed.

Aram said that families of the Armenian victims – numbering in the hundreds of thousands to over a million – must be compensated.

“We are a peace-loving nation,” he said. “But real peace is based on justice. Our people are demanding justice for a crime committed against its fathers and forefathers.

“We cannot remain silent in view of the prevailing silence over this crime,” he added. “Compensation must be made to the victims. We are not looking for punitive justice, but for retributive justice, a justice that brings about recognition, confession, and compensation, and only then reconciliation.”

A memorial Mass was held at the Armenian Cathedral in Antelias. In Bourj Hammoud, the few people in the streets were determined not to let the memory of the mass killings fade away with time.

“We want to make the world understand what the Turks did was wrong, and we want the Turks to accept that what they did was wrong,” Ardem Kanterjian, 20, told The Daily Star. “Today is a mixture of a memorial day and a protest.

“For me, the past is past. I want the Turks to accept what they did was wrong, but my life is here, and it doesn't have anything to do with them. Also, it is important that the Lebanese support us on this day – we are part of them now, and we support them politically.”

Jessica Purseghian, 13, and her friends Lara and Shaghig described how they are taught about the massacre in school and at home.

“We have it in class, and it is on all the TV stations that we watch,” Purseghian said. “And we get it a lot from our grandparents too … [The genocide] makes us angry – we hate the Turks for what they did, and we love Germany!”

The German Parliament passed a resolution in 2005 stating that independent thinkers and groups consider the killings a genocide and apologizing for any German responsibility.

“My daughter is 7 years old, and she learns it in school, which I feel is necessary,” said Ara Yahanian, a hairdresser.

Every year on April 24 we commemorate the memory of the innocent victims of the Armenian Genocide in the Ottoman Turkey. But we always keep the memory of this crime in our souls.

Statement by Stephen Harper, Prime Minister of Canada, on the day of Commemoration of the Armenian Genocide (24 April 2007)