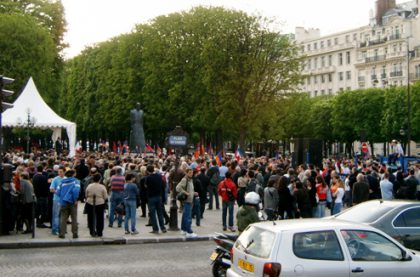 Armenians worldwide marked the 91st anniversary of the Genocide. In all countries where Armenians live the Genocide was commemorated in solemn and grave atmosphere. Participants renewed their vow to serve the truth and to work relentlessly until the final and overwhelming recognition of the Genocide.

Below are reports from four continents (Europe, Asia, , ).

Several memorials were inaugurated in . In , the city with the strongest Armenian community in France, 3.000 people attended the inauguration of a Genocide memorial. Present was Arthur Baghdassarian, the Speaker of the Armenian National Assembly.

In , another memorial, protected by a video system, was inaugurated in the center of the city, in the presence of Dominique Perben, the Minister of Transportation.

On 18th March 2006 some 3.000 members of the Turkish community demonstrated in the streets of holding up banners denying the Armenian Genocide. One month later, the monument was attacked.

More than 7.000 persons participated in the commemoration of in front of the statue of Gomidas father. Several representatives of French political parties affirmed their support to the descendants of the Genocide of 1915, mentioning that has to recognize the Genocide in order to be able to enter the European Union. Deputy Patrick Devedjian assured the participants that “denial of the Genocide will not pass.”

Totally about 30.000 people attended this years commemorations all over (out of Armenian population of 500.000). 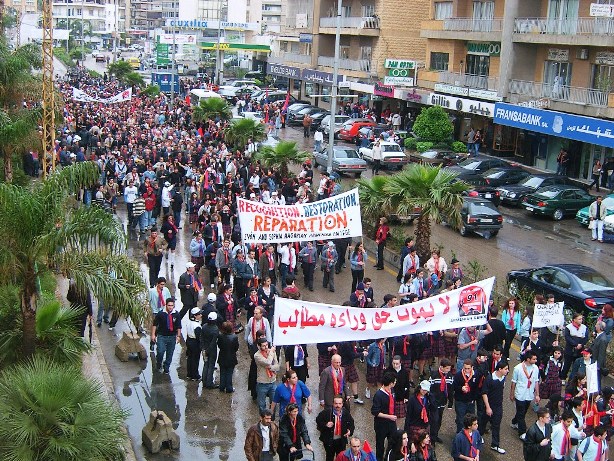 91 years after the bloody massacres and as established by tradition Holy Mass was held in the St. Gregory the Illuminator Cathedral. His Holiness Aram I, Catholicos of Cilicia, then headed a procession towards the Martyrs? Chapel where the remains of Armenian Genocide victims rest and a requiem service was held around the chapel.

His Holiness Aram I delivered his message to the people: ?Today is a day of national struggle and accountability. This is how I characterize April 24 on our nation?s calendar. We are gathered with the spirit of accountability and demands. Struggle means accountability. Our martyrs demand explanation from us today,? the Pontiff said.

?Is the Armenian student ready to give account? Is the Armenian youth ready to explain that it is strongly committed to the eternal legacy of our martyrs in its everyday life?? he asked.

His Holiness said: ?Our martyrs remind us that we should demand accountability from criminal that executed a government planned Genocide against our nation in 1915. If criminal continues to deny the Genocide committed by its ancestors, there are proofs, even in the criminal?s drawers, that witness to this crime committed against humanity. Where is justice, where is respect for human rights, where is the unfolding of truth? we ask. But we will continue our national struggle, accounting to our martyrs and demanding accountability from the criminal.?

?April 24 is not a single day in our calendar. Every day is April 24 for the individual who considers himself Armenian and lives as an Armenian. Today we renew our pledge from to Antelias gathered around the remains of our martyrs. In all the corners of the world we renew our pledge to walk down the path of our martyrs, remaining true to their legacy; walk down the path that will lead us to justice, because that is the road that leads to the truth,? added the Spiritual Head.

The thousands of Armenian listening to the message then watched the placement of wreaths by various Armenian organizations and parties and the mass then started a march towards the municipality stadium in Bourj Hammoud, where a special event was organized on this occasion.

Events dedicated to the 91st anniversary of the Armenian Genocide took place on April 24 in , the capital of .

Heads of the local Armenian communities laid a wreath at 10:00 in the morning to the memorial plaque placed on the square called “Armenian People's Genocide.”

, after the midday the general ceremony took place on the

The ceremony was initiated by the Uruguay Armenian multi-union organization. Walter Cardozo, the Parliament Speaker of Uruguay, Mariano Arana, the Minister of Housing, Territorial Planning and Environment, Lilian Keshishian, Parliament Deputy of Armenian origin, Archbishop Hakob Kelenjian, the Armenian church primate, AGBU school pupils and members of youth groups of unions, others were present at the event.

Historian Alberto Dourejian made a speech after the state hymn. He touched upon reasons and consequences of the Genocide. At the end The Primate, with the help of the Catholic and Evangelical churche Representatives, held a divine service dedicated to the memory of the 1.5 million Armenian martyrs.

International Recording Artist, Daniel Decker, to sing in , Sunday April 23, 2006, 2-4 p.m. In commemoration of the 91st Anniversary of the Armenian Genocide. Daniel is the lyricist for the song .

Syracuse, NY (PRWEB) April 25, 2006 — Adolf Hitler is quoted as saying, eight days before invading Poland in 1939, ?Who today, after all, speaks of the annihilation of the Armenians?? He was speaking of being inspired by the 1915 genocide of 1.5 million Armenians by the as he began his own systematic campaign of destruction. Today, the Armenian genocide remains fresh and relevant in the minds of Armenians around the world. American composer and singer, DANIEL DECKER, seeks to help remind the world in an effort to heal a nation, as well as build a bridge spanning time, history and geography. His epic song ??, a collaboration with noted Armenian composer Ara Gevorgian, recounts the tragic story of the Armenian genocide, pairing Decker?s critically acclaimed lyrics with Gevorgian?s rich musical landscape.

Decker will make a special appearance in City, April 23, 2006, 2 p.m. at the 21st Annual Armenian Genocide Commemorative Program. Immediately following the performance, he will leave for to perform in a special concert on April 29, 2006 with Ara Gevorgian and his 100 piece orchestra. ?? was first presented on April 23, 2005 in at the official invitation of the Armenian Government to commemorate the 90th anniversary of the genocide at the Armenian genocide memorial and was covered by news organizations around the world.

Said Decker, ?I stand with the Armenian people are around the world on this day to remember those whose lives were taken during the genocide in the hopes that by telling the story, there will never be another genocide.?

– (photos, by the Catholicosate of Cilicia)