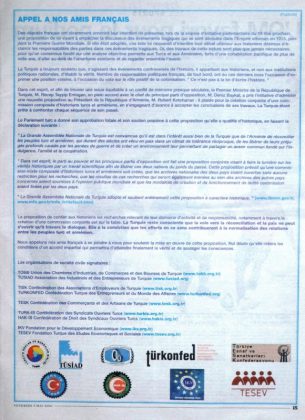 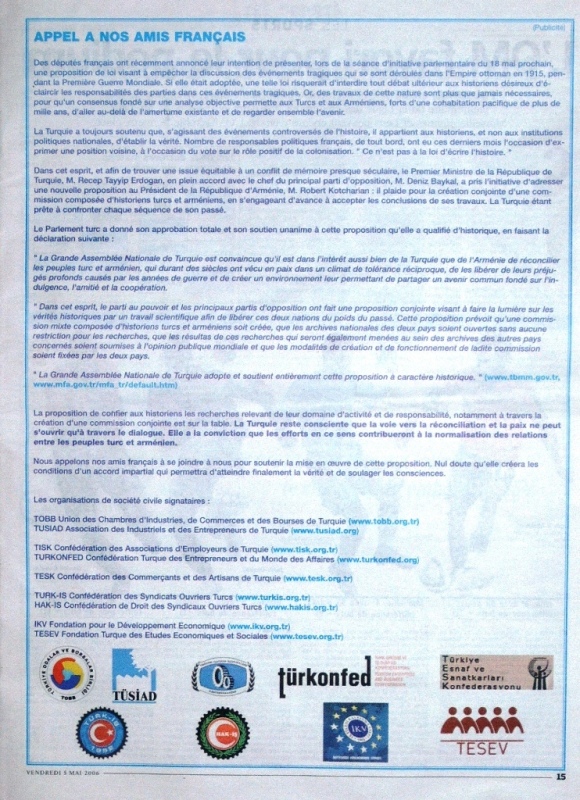 Left side: Jean Eckian from reports that in its edition of 5th May 2006, French newspapers ?Le Parisian?, ?le Monde? and ?Le Figaro? published a full page advertisement financed by various Turkish trade and labor unions, non-governmental organizations, entitled “Call to our French Friends”, asking for the withdrawal of the bill on penalizing the Genocide denial. The main argument was that history should be left to historians and not to legislative bodies.

On 18th May 2006 the French Parliament will vote a bill that makes the denial of the Armenian Genocide a punishable crime.

Media articles are analyzing this new development, especially ?s reaction and possible economic measures against and other countries who would adopt such legislation.

Following are three articles (from Turkish, European and Canadian Perspectives) on the same subject:

is acting to prevent 's legislative proposal to penalize those who deny the so-called Armenian genocide.

The Turkish administration briefly recalled its Ambassador to France this week, Osman Koruturk, who returned to to offer an official analysis through diplomatic channels. A group of Turkish deputies traveled to to persuade their French counterparts. Foreign Ministry sources say Koruturk was called to to discuss issue, and he will head back to by the weekend.

is exerting efforts in diplomatic, political and economic channels against the bill in question.

Prime Minister Recep Tayyip Erdogan, meeting with business leaders partnered with French companies yesterday, asked for their support to obstruct the submission of the motion to the French Parliament on May 18.

Business executives representing French economic interests in said they sent a letter to French President Jacques Chirac and will do all they can to stop the motion.

does not expect rocky relations with at this point. No extreme measures, such as officially withdrawing the Turkish ambassador, will be resorted to at this stage. However, will convey the message that it believes in the “liberalistic environment of .”

The motion, proposed by the main opposition Socialist Party in , will be discussed today at the French parliamentary Regulations Commission. Even if the motion passes on May 18, a long process is required to render it law.

The legislative proposal brings a fine of 45,000 Euros and a prison sentence to those who deny the so-called Armenian genocide. Trade unions, labor unions and non-governmental organizations in issued a full-page notice in French newspapers asking for the motion's withdrawal.

As part of the concerted efforts, the Turkish Parliament Foreign Affairs Commission went to Tuesday before discussions for the motion begin.

Turkish Parliamentary Foreign Affairs Commission Chairman Mehmet Dulger from the ruling Justice and Development Party (AKP), and deputies Musa Sivacioglu, Onur Oymen and Gulsun Bilgehan Toker will meet with representatives of political parties present at the French Parliament and ask for the motion to be withdrawn.

The Turkish deputies are expected to warn the French politician that the motions' becoming law may lead to irreparable damages in bilateral relations.

In the frame of economic efforts, pointed out is an important export point for and asked for the support of business circles.

The Prime Minister had a 45-minute meeting with the executives of French companies operating in . “This is unfair,” said Erdogan, “This is the job of historians, we expect support from your business partners in ; we want them to lobby.”

Twenty-two of 28 companies joined the meeting. TEB-BNP CEO Yavuz Canevi, one of the participants, said: “We all agree with the Prime Minister. We have not reached decisions like an embargo yet,” and Omnium Plastic Industry Chairman Bulent Akman warned, “There will be much reaction if the motion passes. It will cause trouble both for the French and us.”

and clash over 'genocide'

has recalled its ambassador to in protest against a French bid to criminalise denial of the alleged Turkish genocide of Armenians in the early 1900s.

has always rejected claims by international historians that 1.5 million Armenians died between 1915 and 1923 as a result of systematic genocide while modern-day was under Turkish Ottoman control.

A spokesperson for the foreign ministry in said on Monday (9 May) that the ambassador was recalled for a short time to discuss what calls the “baseless allegations of Armenian genocide” in .

Later this month French parliamentarians are set to discuss and vote on a law that would make denial of the so-called Armenian genocide a crime.

The law would mirror existing French legislation against holocaust-denial, carrying a sentence of up to five years' prison and a ?45,000 fine.

“The adoption of these texts will provoke irreparable damage to Franco-Turkish relations,” a Turkish government spokesperson said, according to French media.

recognises just 500,000 Armenian deaths during “the Ottoman war,” and rejects the “genocide” tag saying both sides suffered severe losses, with allied to at the time.

Brussels MEPs, acting on a French initiative late last year, also demanded that recognises the genocide of Armenians as a “prerequisite for accession to the European Union.”

The European Commission's translation database, IATE, defines genocide as “harmful acts…committed with intent to destroy, in whole or in part, a national, ethnical, racial or religious group.”

A commission official told EUobserver that ' enlargement unit avoids using the word because “the commission is a forward-looking institution.”

The head of the Turkish parliament's foreign affairs commission, Mehmet Dulger, said this weekend that Turks could boycott French products and French firms could lose lucrative contracts if the legislation is passed, according to Reuters.

“ will not accept becoming a toy in the French election campaign,” Dulger said, with a nod toward the French presidential race in 2007.

He added that he would lead a group of Turkish lawmakers to this week to lobby against the bill.

In 2001, cancelled multi-million euro deals with French enterprises after the French parliament officially recognised the genocide.

Turkish lawmakers are also preparing a rival law accusing of committing genocide during its colonial rule in .

The legal proposal has also come under fire from less politicised voices, with Turkish and French intellectuals protesting over the “inflation of laws of memory” and criticising the government's “promulgation of official truths.”

Meanwhile, an open letter to “our French friends” signed by nine groups of Turkish entrepreneurs and trade unions, published in several French daily newspapers, said “it is not up to the law to describe history.”

and have no diplomatic relations and closed borders, with the landlocked country keen for to open up highways for trade to western Europe.

“We are too small to have enemies,” an Armenian diplomat said.

A diplomatic war about genocide

On the distant matter of and there must be some sympathy for the anguish of Bill Graham when he was 's foreign minister two years ago. At the time, 's parliamentarians were debating whether the mass slaughter of Armenians by between 1915 and 1923 could legitimately be called genocide.

The Liberal government of the day, like every government for decades before, was trying to duck a decision on the question. As Parliament debated the issue and the minority government wriggled like a worm on a hook, Graham said plaintively, “We'd like our Armenian friends and our Turkish friends to put these issues in the past.”

In other words, please don't make us take sides. Let's just all be friends together. How forlorn! How Canadian!

But almost a century after that terrible slaughter, there remains an uncomfortable immediacy. The Turkish government has just recalled its ambassadors to and over it.

has offended by introducing a bill that would make the denial of the Armenian genocide a crime.

In 's case, the complaint was that Prime Minister Stephen Harper last month recalled that both the Senate and the House of Commons had adopted resolutions recognizing the slaughter as genocide: “I and my party supported those resolutions and continue to recognize them today.”

Does it matter what you call mass slaughter?

In , parliamentary recognition of the genocide dates back eight years. One difference between and on the question is that has an Armenian population of about 300,000. 's Armenian population is just 40,000, although individuals like film director Atom Egoyan have given Canadian Armenians an unmistakable visibility.

The Turkish government said the recall of the ambassadors would be for only a short time, yet there could still be serious economic repercussions. cancelled a multimillion-dollar arms deal with in 2001, although economic relations appear to have returned to normal in recent years.

has withdrawn from an international military air exercise in in May and June in protest against ?s stand. And there is speculation in Turkish newspapers that will be ? or perhaps has been ? excluded from the bidding to build a nuclear power plant in the Black Sea town of .

Of the two countries, it is about which must be more uneasy. is one of the most powerful voices in the European Union, which is desperately eager to join. And former French foreign minister Michel Barnier suggested that Turkish admission to the EU might be conditional on its acknowledgment of the genocide.

Everyone agrees that there was a terrible slaughter; what is at issue is the magnitude of the slaughter and the name to apply to it.

The Turks acknowledge that perhaps 300,000 Armenians, as well as many Turks, died as a result of civil disturbances involving the Christian Armenians, who had always lived in as second-class citizens.

The Armenians say that as a result of a deliberate campaign of genocide, 1.5 million men, women and children were killed or starved to death, and thousands of others were deported.

Historians tend to side with the Armenians. There have even been a few Turkish historians who have called on their fellow citizens to consider the Armenian case, but those are isolated voices in a defiant land.

The , , , and do not use the word genocide about the Armenians. But in addition to and , a score of European and Latin American countries have officially recognized it as such.

It was Barnier, the former French foreign minister, who cast the dispute in a much broader perspective. The parallel he drew was that of the reconciliation of and after they had fought three unimaginably terrible wars in less than a century:

“If, as I think, the core idea of Europe's project is that all its members should reconcile one with another ? like France and Germany, which have put reconciliation at the centre of their project ? and that each member state should reconcile with its own past, then I believe that when the time comes Turkey, too, will have to come to terms with its own past and history, and recognize this tragedy.”

Scan of the French newspaper sample by Jean Eckian.