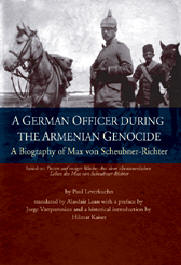 A Biography of Max von Scheubner-Richter, based on a book written by Paul Leverkuehn*

This is a fascinating study of a man who is one of the most enigmatic links between the Armenian Genocide and the Holocaust. Scheubner-Richter was a founding father of the Nazi Party and one of Hitler?s closest colleagues, deemed irreplaceable by the leader of the Party. The preface by Jorge Vartparonian offers a succinct and potted biography of the man, whilst Hilmar Kaiser?s analysis of Scheubner-Richter?s time in the Ottoman Empire, and specifically Erzerum, is highly detailed and utterly riveting. Kaiser?s account is so well researched that it undermines some previous studies as lacking in rigour. Kaiser?s introduction is perhaps the most detailed account of a figure who has remained in the shadows that bridge the gap between the Armenian Genocide and the Holocaust.

Scheubner-Richter was both an ambitious man and a career pragmatist, yet he also displayed a sense of moral outrage regarding the massacres he witnessed in both Erzerum and Bitlis where he served as the German Vice Consul at the height of the Genocide.

Kaiser explains how in 1914 Armenians were caught between a rock and a hard place due to the presence of Armenians on both sides of the Russo-Turkish border. This geographical division of Armenians brought their loyalty to the Ottoman Empire into question, though not by Scheubner-Richter it must be noted. Ottoman Armenians of the Armenian Revolutionary Federation committed themselves to defending the Ottoman Empire but could not turn Russian Armenians against the Russian government. Further meetings took place but the ARF were at odds with Talaat (CUP), who wanted all Armenians to fight against the Russians. These meetings could well have been a contributing factor in the events that unfolded in 1915. Certainly after this series of meetings, the Armenians began to redouble their own efforts at self defence.

Kaiser illustrates through Scheubner-Richter?s writings that the signs of what was coming was already visible in the early months of 1915 and how he felt that Armenian concerns were justified.

Throughout, Scheubner-Richter suggested there was no threat of an Armenian uprising against the Ottoman Government, because all the able bodied men had been sent to labour batallions, and he did his utmost to help calm the situation. As things progressed he even took upon himself to personally deliver supplies to starving Armenians. However, the Ottoman authorities had their own agenda.

On hearing of the decision to deport Armenians to Der Zor, Scheubner-Richter grimly suggested that half of those travelling would not survive the journey, which was something of a conservative estimate. Kaiser also explains how, as far as Scheubner-Richter was concerned, the deportations were based on ?racial hatred? and little else.

What makes Scheubner-Richter such a compelling commentator on the Armenian Genocide is his oft voiced frustration at how the internal butchery taking place was damaging the German war effort, and yet rather than being an impassioned observer, he went further than his office allowed in his bid to help save Armenians.

His horror at the massacres was voiced in his disgust at being an ally of the Ottoman Government when he wrote that: ?As officers we are compelled to shut our eyes to these things, but as men, the alliance with these people is unbearable?

The euphemisms that the Ottoman authorities used, like those that were a later feature of the Nazi genocide of Jews, were alluded to when he pointed out that the word ?deportation? was synonymous with ?extermination?.

On his immediate return to Germany, Scheubner-Richter offered to help Johannes Lepsius save some of these people, who according to the former, no longer looked ?human?, but by 1922 his sympathies had evaporated, perhaps under the influence of the men with whom he was formulating a manifesto that would bestow a similar fate on Jews.

Perhaps the most interesting suggestion by Dr. Kaiser here is regarding Armenian property. It would appear that there was no arrangement in place to deal with the property left behind by the Armenians, which was suggestive that for the Young Turks, this was a functionalist genocide as opposed to a long standing intentionalist crime.

In Hilmar Kaiser?s piece there is much to suggest that Scheubner-Richter was a pragmatic careerist, but something of a maverick who despite his pursuit of rank could not fully ignore the horrors he witnessed in 1915.

The second part of the book is a biography of Scheubner-Richter first published in 1938 and written by Paul Leverkuehn, a friend and colleague. The first real revelation is of Scheubner-Richter being shocked at the suggestion that Armenians were no longer loyal to the Ottoman State, which led him to question whether there was a reason for this mystifying switch, or if it was simply a pretext created by the Young Turks to carry out the genocide of Armenians.

It was believed by Leverkuehn and Scheubner Richter that any disturbances by Armenians must have been in response to something, most likely arrests or assassinations by the Ottoman Government. Leverkuehn suggests that Pan Islamism/Pan Turkism ideals were the real cause for the genocide especially given that the Turks felt emboldened by the cover of total war, and saw an opportunity to ?finish off? the Armenians.

A fascinating aspect of Leverkuehn?s account regards the debate between an indignant Scheubner-Richter and an unapologetic Tashin Bey. Leverkuehn illustrates Scheubner-Richter?s frustration at his inability to change the course of events that according to Leverkuehn accounted for there being only 400,000 remaining in the Ottoman Empire from a population of 1.8 million. Scheubner-Richter wanted to do the right thing, but was hamstrung by Germany?s alliance with the Ottoman Empire. Leverkuehn?s account of their travels is an eerie catalogue of absence. In Sivas he observes caravans of Armenians and dead bodies, in Bitlis, Armenian shops are shut, their owners deported never to return, whilst in Mosul Leverkuehn comments on the fear of the Syrian Christians who were afraid that the massacres meted out to the Armenians might soon visit them.

It is also interesting that Leverkuehn felt that the Turks were trying to apportion blame to Germany for the massacres through lies and rumours. The hospitality afforded to both him and Scheubner-Richter he claims, was a ploy to suggest that the Turks and Germans were in perfect accord and that the genocide was a part German construct. Leverkuehn rarely expresses outrage but instead proffers sympathy and frustration regarding the plight of the Armenians. The details of Scheubner-Richter?s later life which is of relevance to the rise of the Nazi Party are also examined in this account, as an anti-Bolshevik National Socialist personality comes to the fore when he met the man he regarded as a ?prophet?, Adolf Hitler. The shift from morally outraged humanitarian to potential perpetrator of genocide is best exemplified on page 144 where there is a quote from Scheubner-Richter that could easily have been lifted from Young Turk propaganda such is its virulent nature and its right wing invective.

This timely book, a unique account of a complex man, discovers a Scheubner-Richter who is a complicated character with no continuity in his moral and philosophical leanings. The effect of witnessing the Armenian Genocide may well have hardened his heart to such a degree that he could well have become capable of visiting similar outrages on Jews. Nevertheless, this publication is important in that it casts light on both the studies of the Armenian Genocide and the Holocaust.

* Based on “Posten auf ewiger Wache: Aus dem abenteuerlichen Leben des Max von Scheubner-Richter”. The book is translated by Alasdair Lean with a preface by Jorge Vartparonian and a historical introduction by Hilmar Kaiser.