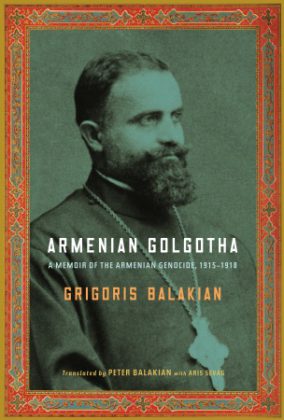 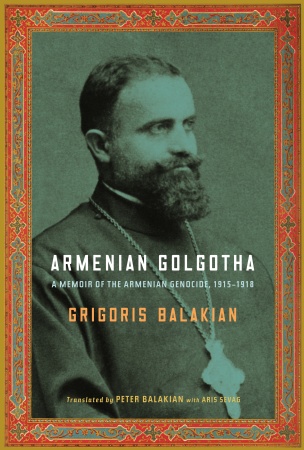 New York – “Of all the Christian minorities of the East, we Armenians are to blame for our fate. For although we are an alert nation, we believed in the Europeans' professed struggle for justice and rights, in their false words and deceptions. Our exemplary stupidity was a simplemindedness peculiar to peasants: we did not realize that on the scales of justice, the oil deposits of Mosul would weigh more than the lives of millions of Christians.”

On April 24, 1915, the author of these words, Fr. Grigoris Balakian, was arrested along with some 250 other intellectuals and leaders of Constantinople's Armenian community. During the next four years, he bore witness to the countless deportation caravans of Armenians, tortured, raped, or slaughtered and subsequently mutilated on their way to death in the Syrian deserts; heard the testimony of many survivors, foreign witnesses, and Turkish officials involved in the extermination campaign; and also came to know of some brave, righteous Turks and their German allies who resisted secret extermination orders.

Miraculously, Balakian managed to escape ? through forest and over mountain, disguised as, among other things, a railroad worker and then a German soldier. By September 1918, determined to testify to the “great crime,” he was already at work on a dramatic and comprehensive memoir. “One after another the bloody episodes of the thorny Armenian Golgotha moved across my mind,” he wrote. “We were still living in a time of annihilation and terror.”

Searing in its detail, Balakian's analysis of the Turkish government's organized plan to annihilate the Armenians spurred the young Vahakn Dadrian to devote himself to research on the Armenian Genocide. Armenian Golgotha “shook me to the foundations of my being,” he recalled in a 2005 interview with the Armenian Reporter. “The graphic description of the fiendish atrocities overwhelmed me. That became a turning point in my academic career,” added Prof. Dadrian, now Director of Genocide Research at the Zoryan Institute.

Grigoris Balakian, who became bishop of the Armenian Apostolic Church in southern France, died in Marseilles in 1934. His great nephew, the poet and memoirist Peter Balakian, first learned about Armenian Golgotha in 1991 through a chain of circumstances he describes in his prize-winning memoir Black Dog of Fate (now reissued in a 10th anniversary edition).

After a ten-year project of translating and editing this memoir with former Armenian Reporter managing editor Aris Sevag, Peter Balakian has brought Armenian Golgotha into an English edition to be published by Knopf on April 2. “It has been a particularly poignant and rich experience for me to bring [Grigoris Balakian's] book into print in English, eighty-seven years after its initial publication,” Peter Balakian writes in the preface.

Elie Wiesel found Armenian Golgotha a “heartbreaking book”; Sir Martin Gilbert calls it “a story that needs to be known.”

“The translation and publication of Armenian Golgotha in English is long overdue,” states Deborah E. Lipstadt, author of Denying the Holocaust. “It constitutes a thundering historical proof that those who deny the Armenian Genocide are engaged in a massive deception.”

“This book will become a classic,” predicts Robert Jay Lifton, author of The Nazi Doctors,”both for its depiction of a much denied genocide and for its humane and brilliant witness to what human beings can endure and overcome.” 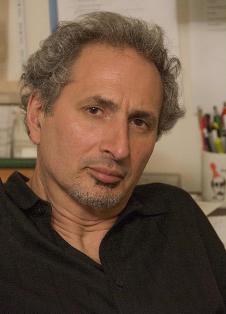 A conversation with Peter Balakian on Armenian Golgotha

Bishop Grigoris Balakian is your great uncle. How did you come to find out about him and his memoir?

Growing up, I knew he was a Bishop in the Armenian church. He was spoken of occasionally by my father and aunts. Although they mentioned some books he wrote about the Armenian church, no one ever mentioned this great memoir. And what's odd is that both my aunts were literary critics and my father was also a serious student of history, but they didn't mention this book. I know the subject of the fate of the Armenians in 1915 traumatized them, and so all was silence when it came to this subject. I wrote about my discovery of my great uncle in a chapter of my own memoir, Black Dog of Fate. So my memoir led to my finding his memoir. It's become a sort of dialogue both within the family and about this history.

How did you find out about Armenian Golgotha?

It was coincidental, or fated if you will. In 1991 a friend of mine sent me a French magazine article about a commemorative service for him. He had been the Bishop in Marseilles at the end of his life. And the article mentioned this “extraordinary memoir about the Armenian Genocide.” Immediately I ordered the book from Beirut ? it's still in print in the original Armenian. And by 1999 I was working with a co-translator. The project has taken 10 years.

What was the process of translating the memoir like?

For me it's been a moving and complex journey to discover my great uncle's survivor story, his language and his life. The translation was a collaborative process, and it has been slow and painstaking. Trying to find the right idioms, and words, rhythms, and sounds for this rich Armenian language in contemporary English was an endless challenge. And this is a book of 71 chapters of pretty dark stuff.

How has your uncle come to life for you?

I had no idea my uncle was such a dynamic leader and prominent intellectual of his generation. Armenian Golgotha brings to life the extraordinary creativity, wit, humanity, and compassion this young Armenian clergyman exhibited in the face of overwhelming odds. His ability to negotiate with Turkish perpetrators and still provide sustenance to his emaciated group of fellow deportees is remarkable. And throughout the story he remains humble and focused on helping others. As a clergyman, he's anguished both by the human suffering he is witnessing and by the destruction of his culture, the culture of which he is a guardian and protector. His witnessing is compound witnessing in this way.

What kind of contribution does Armenian Golgotha make to our understanding of the Armenian Genocide?

It's an essential text. There is no text about the Genocide that's as rich, layered, and complex as this. It brings us closer to the century's first genocide than any other first-person account that I know of. Balakian was one of the famous 250 Armenian cultural leaders who were arrested on the night of April 14, 1915, at the very start of the genocide. He survived nearly four years on deportation marches and witnessed things that few survivors have described.

How did he witness more than others?

He was in a unique position as a priest because Armenian deportees looked to him for help, and for several months he led more than a hundred deportees through horrendous conditions. Along the way, he encountered survivors from other parts of Turkey and they told him stories of the massacres they had witnessed. Also, Turkish perpetrators, thinking he was on his way to death, opened up to him and told him some extraordinary things. And, the German, Swiss, and Austrian railway engineers told him their accounts of witnessing atrocities. He traveled hundreds of miles and witnessed the ruins and remains of many destroyed Armenian villages, towns, and cities.

Could you say more about the destruction of Armenian culture and its artifacts and infrastructure?

Yes, that's an important part of the process of genocide. Raphael Lemkin, the Polish legal scholar who created the concept of genocide as an international crime, underscored the fact that genocide involves not only the killing of people but also the destruction of a people's cultural institutions, language, art and artifacts, religion, and so on. In the case of the Armenian Genocide, the Turkish government destroyed more than 5,000 Armenian churches and schools as well as thousands of other buildings, artifacts, works of art and literature. Balakian also shows us what happened to Armenians who were forceably converted to Islam from their Christian faith. It's astonishing to read how intensely Grigoris Balakian bears witness to this kind of destruction on his deportation and escape.

What does Balakian's memoir show us about this event as an act of genocide?

Readers will find that Armenian Golgotha corroborates what most of the scholarship has shown. The deportations and massacres of the Armenians were planned by the central government; he shows us how the Turkish government used surveillance, created blacklists to arrest the cultural leaders, created killing squads, created false provocations in order to arrest Armenians, and so on. Chapter 11 is a blueprint of the genocidal process.

Why is the Armenian Genocide important to study today? After all, it happened almost 95 years ago.

Well, the Armenian Genocide is the template for all genocide to follow in the modern era. It began what you might call the age of modern genocide. It was the first instance in which a nation state used its military, bureaucracy, and technology to exterminate a target group of people in a concentrated period of time. More than a million people were killed in a year. Hitler was inspired by the Armenian Genocide; he saw you could get rid of a hated ethnic group that way, and he said in August 1939, “Who today, after all, speaks of the annihilation of the Armenians?”

About the book: Armenian Golgotha
http://www.reporter.am/go/article/2009-03-25-grigoris-balakian-s-armenian-genocide-memoir-armenian-golgotha-to-appear-in-english-april-2

The interview with Peter Balakian
http://www.reporter.am/go/article/2009-03-25-a-conversation-with-peter-balakian-on-armenian-golgotha