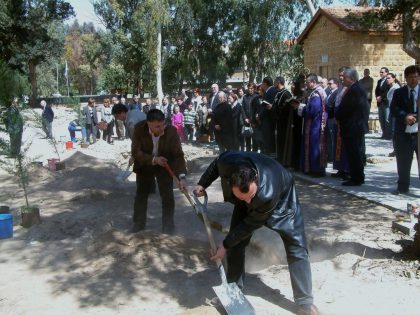 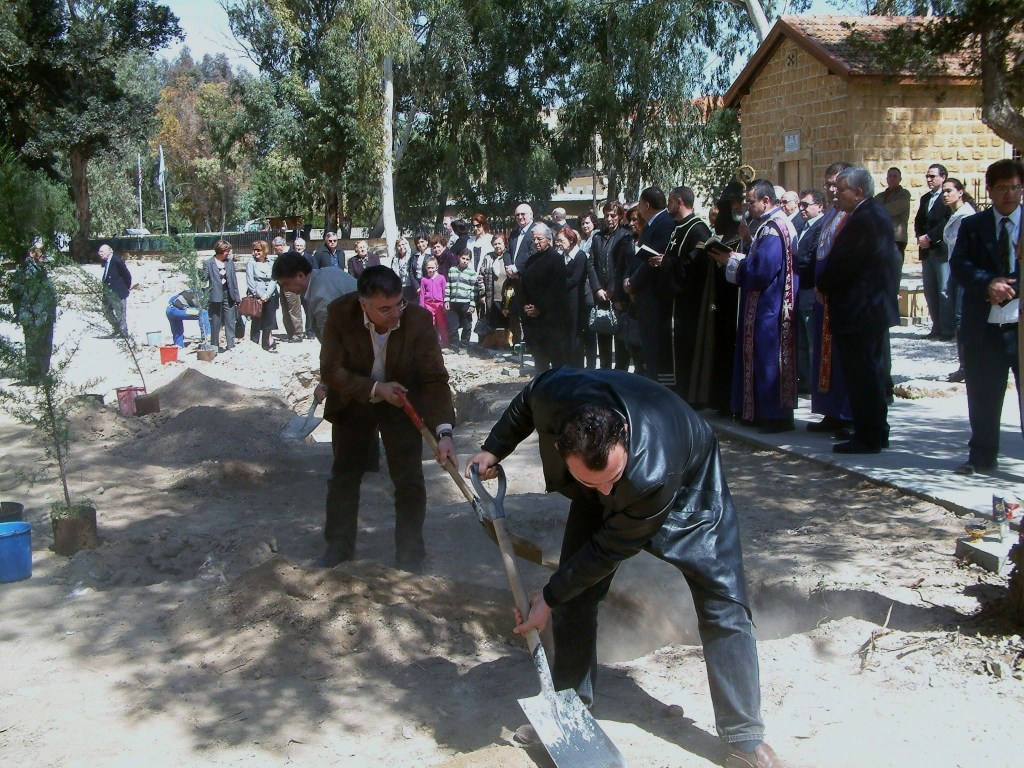 Members of the Armenian community of Cyprus, joined Archbishop Varoujan Hergelian accompanied by clergies and deacons of the Armenian Church, in a solemn ceremony for the reburial of the remains of 9 identified and 32 unidentified Armenians previously exhumed. They were laid to rest, in accordance to the rites of the Armenian Apostolic Church, last Sunday, 22 March 2009.

Cypress trees were also planted on the grounds of the cemetery, with many, kindly participating in the throwing of soil with shovels.

Before and after the ceremony, we wandered through the cemetery grounds, located between the Law Courts and the Wolseley Barracks, right next to the UN Buffer Zone. For me it was a journey through time, as we were able to see the historical tombstones, most of which dated to the late 19th and the early 20th centuries. The majority of the graves belonged to local (deghatsi) families; indeed, some of the inscribed surnames are apparently uncommon today. Others were hard to read, because of the decay of the marble.

My company were puzzled why Latin writing was found on some tombs located to the north part of the cemetery, but then I reminded them that it is customary to bury Armenian Catholics to the right part of a cemetery, Armenian Protestants to the left, and the Apostolics in the centre. With works expected to complete in about a month, an obelisk (houshagotogh) will be bearing the names of the 463 buried there since 1877, including the ones whose graves are still intact.

The old Armenian cemetery appears to have been in use as a burial ground since the 15th century, but according to records of the Armenian Prelature it was officially registered as a cemetery in 1877. The wall and the gate were erected in 1888, and the Sourp Boghos chapel was built in 1892, in memory of the cemetery?s benefactor, Boghos Odadjian, a Bolsetsi.

Due to the increase of burials – a direct result of the Armenian Genocide and the large number of refugees who fled to Cyprus – a new plot was purchased to the west of Ayios Dhometios. The last burial, carried out in 1931, was the 9-months old Bedros Aynedjian.

In 1963, because of the widening of Shakespeare street, about 100 graves had to be demolished and their remains were trans-located to the Ayios Dhometios cemetery. After the inter-communal troubles in 1963-1964, the historical cemetery was abandoned due to its proximity to the buffer zone.

Ironically, in 1974 the Ayios Dhometios cemetery fell within the buffer zone; for burials, a special permission was required 24 hours in advance, with a limited number of mourners attending.

After the efforts of MP Vartkes Mahdessian, visits there are allowed every Sunday. In 1998 the new cemetery was built, to the north of Lakatamia-Ayii Trimithias road.

The Sourp Boghos chapel has been restored, its roof has been renovated, and the commemorative plaque in front of the door replaced, however it still needs painting on the inside.

As of this year, a small service will be held there on the Sunday following Easter.

We look forward to the completion of the restoration works for the cemetery, hoping it will become a gem for the region and the community.