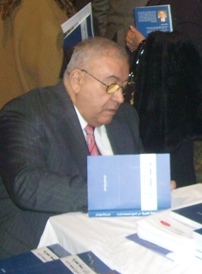 Click the icon below to download the electronic version of the book (PDF format, in Arabic, 308 pages, 1.1 MB)

Launch of the book “Egyptian Armenian Views on history, politics and cultural heritage”

A new book written by Mr. Berdj Terzian, the Chairman of AGBU Egypt, was launched on Sunday 18th January 2009 at the premises of the Armenian Embassy in Cairo, under the auspices of H.E. Dr. Rouben Karapetian, the Ambassador of Armenia in Egypt.

The reception for the launch of the book was held at the garden of the Embassy and was attended by Egyptian dignitaries, representatives of different Ministries, Scientific and Cultural institutions, as well as members of the Armenian community in Egypt.

H.E. Dr. Rouben Karapetian, after presenting Mr. Berdj Terzian to the audience, gave a brief description of the contents of the book which is comprised of a collection of forty articles, published in the editorial column of the Arabic monthly “Arev” supplement from February 1998 to February 2008.

The book gives a bird`s eye view on Armenian history and on the Armenian genocide in particular and its ongoing repercussions on current Armenian affairs.

The book is also rich in articles on current political situations that Armenia faces since its independence from the Soviet Union in 1991, with in-depth articles on the Nagorno Karabagh question. Furthermore, the book includes cultural articles on the Armenian church, important Armenian figures, Armenian communities in different countries, personal memoirs, etc..

As described by H.E. Dr. Rouben Karapetian “The book is unquestionably an important contribution to Armenia related Arabic literature. It is a valuable source of reference in Arabic for all those interested in Armenian affairs.”

Mr. Berdj Terzian, in his concise speech, thanked the Ambassador of Armenia for hosting the book`s launch, he also thanked Dr. Mohamed Refaat El Imam who is the Editor in Chief of the “Arev” Arabic monthly supplement since it started in January 1998. He also pointed out the importance of this publication in spreading Armenia related news in Arabic to a wide scope of Arabic language readers in Egypt and abroad. The publication is the result of the joint efforts between the Armenian National Fund, which issues the magazine, and AGBU Cairo which assumes the highest part of its publishing budget.

The author, Mr. Berdj Terzian is a prominent Armeno-Egyptian intellectual, whose continuous devotion to Armenian affairs has left a significant imprint in Armenia State or community related matters.

The book is a true reflection of his rich and profound “Armenian” knowledge.

Mr. Terzian is a member of AGBU District Committee of Egypt since 1964 and its Chairman since 1988, he is the Honorary Chairman of AGBU Cairo, after being its Chairman from 1992 to 2002.

He is also the editorial advisor of AGBU Cairo`s “Deghegadou” quarterly magazine and the monthly “Arev” Arabic supplement for Armenian issues.

Mr. Terzian acted as the Chairman of the Executive Board of the Armenian Orthodox Patriarchate in Cairo from 2003 to 2006 and is an active member of the Diocesan Council of the Armenian Church in Cairo since several decades.

Photo: Berdj Terzian signing his book during the ceremony.

Newer PostGerman Officer during the Armenian Genocide
Older PostAl Jazeera reporter in Karabakh: To fight or not to fight