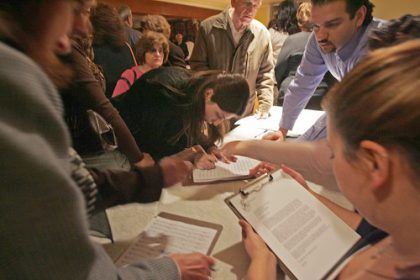 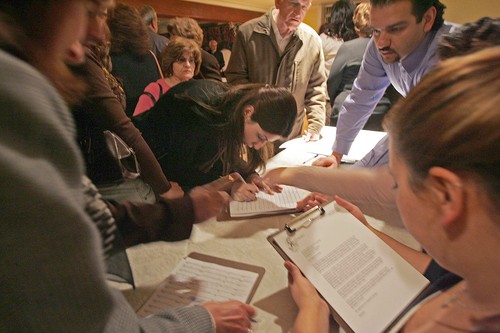 An Armenian church in Glendale is part of an effort to allow more refugees persecuted in part for their faith into the U.S.

They were dressed as police officers, but Iraqi physician Nina Grigor knew something was dreadfully wrong when they threw her into a car, blindfolded her, tied her wrists ? and ripped the cross from her neck.

For five days last March, the Iraqi Armenian Christian was held somewhere in Baghdad. When she was finally freed after her family paid $100,000 in ransom, she was immediately spirited away to Armenia for safety and then, in July, to Glendale.

Now she is free ? one of a growing number of Iraqi Armenians who have found safety in Southern California amid spiraling sectarian violence in their homeland. Grigor, 26, has received political asylum and is studying for her U.S. medical licensing exam.

Grigor's sleepless nights and frightening dreams have finally stopped. But the widespread kidnappings, killings, rapes and church bombings ? atrocities that have become almost routine ? continue to terrorize hundreds of thousands of Iraqi Christians left behind, she said.

“I have a safe life here,” said Grigor, who asked that an alternative first name be used to protect her and her relatives. “But the other Iraqi Christians need our help.”

Now, at last, more of them will get it. After months of mounting violence, the U.S. government recently announced it would accept 7,000 Iraqi refugees by the end of September ? a big increase from the few hundred accepted so far since the war began in 2003.

Locally, St. Peter Armenian Church in Glendale kicked off the Lenten season last week with a candlelight service and letter-writing drive urging greater resettlement opportunities for Iraqi Armenian refugees. The letter, which will be sent to elected officials, said Armenians have lived peacefully in Iraq for centuries but that the rise of Islamic fundamentalism since the war began has made them open targets of killings, harassment and discrimination.

The Iraqi Armenian Relief Fund in Glendale is raising money to move families from Iraq to Armenia, where it supports them for one year. But so far the group has only managed to relocate nine families in the last two years, according to vice-president Rafi Ohanes Garabedian. The group is aiming for 15 families this year, he said.

Southern California is home to at least 300,000 Armenians, one-fifth of whom may have ties to Iraq, community leaders say. They estimate that a few hundred Iraqi Armenians have come here since the war began, mostly on tourist or work visas, and may be seeking political asylum or other ways to stay.

Despite those efforts, many people are calling for far greater measures amid what experts say is the largest mass exodus of Iraqis from their homeland in modern history. Earlier this month, Sen. Edward Kennedy (D-Mass.) called on the United States to pledge at least half of the $60 million requested by the United Nations for Iraqi refugee resettlement. So far, the U.S. has pledged $18 million.

“Our invasion of Iraq led to this crisis, and we have a clear responsibility to do more to ease it,” Kennedy said this month on the Senate floor.

The U.S. Committee for Refugees and Immigrants says $250 million is needed for a more comprehensive resettlement effort.

For their part, Iraqi Christians say that a far larger quota for refugees is needed.

The Chaldean Federation of America said Christians make up about 200,000 of the 2 million people who have fled Iraq since the war began. Joseph Kassab, federation executive director, said Iraq's Christian population has dwindled from 1.1 million during Saddam Hussein's regime to 600,000.

Christians are routinely targeted for violence and accused of being American collaborators, Kassab said. But unlike their Arab and Muslim neighbors, Christians lack tribes or militias to protect them, he said.

State Department official Ellen Sauerbrey said the 7,000 quota was not a ceiling but an initial number that could be adjusted annually. She said priority would be given to Iraqis who worked with the U.S. government, are members of persecuted religious or ethnic minorities or are members of other vulnerable groups.

Ultimately, however, U.S. officials want to stabilize Iraq so people who flee can return, Sauerbrey stressed.

However, Kassab said many Christians no longer regard Iraq as their homeland and do not expect to return. For Chaldeans, who trace their roots to the descendants of the ancient inhabitants of Mesopotamia and who predate Muslims by centuries, the forced departure is particularly appalling, he said.

Many Armenians, who represent a far smaller group of Iraqi Christians, voice similar sentiments. Although they have lived in Iraq for centuries, their numbers particularly grew after the Turkish genocide against them in the early 20th century, community members say, and came to total perhaps 60,000. (The government of Turkey disputes that what occurred was genocide.)

Many say they are grateful to the Arabs of Iraq who welcomed and sheltered them. Under Hussein's secular regime, Grigor and others said, most Christians were allowed to work, worship and socialize at Armenian clubs largely without interference as long as they did not challenge the political status quo.

Now, all of that has changed, they say.

The uncle of one client, she said, was told by his kidnappers that “they will get all of the Christians out of their neighborhood or kill them because they're friendly with Americans.” Another Christian client in a Shiite Muslim neighborhood received a letter demanding that all non-Shiite families leave immediately or face death.

Hartman and some refugee groups argue that Iraqi Christians have a prima facie case for refugee and asylum status. The United Nations, however, does not agree and reviews all claims individually.

For now, many Iraqi Armenians are relying on prayer and political appeals to help their loved ones.

At St. Peter Armenian Church, pungent incense and chanted Armenian prayers filled the sanctuary as more than 250 parishioners gathered last week in support of the refugees.

One of them, Marine Abrahamyan Abdasho, wept as she held a candle in prayer. The Glendale teacher is not of Iraqi descent, but she said the long history of persecution against Armenians compelled her to support all victims of violence.

“Our history as Armenian people has made us able to feel the pain of anyone suffering now,” she said.

After the service, parishioners gathered in the reception hall to sign letters of appeal for Iraqi refugee aid and shared story after story of families fleeing atrocities, of being scattered around the world. Nearly 70% of the church's 500-member Sunday congregation are of Iraqi descent, according to Pastor Vazken Movsesian.

Noobar Zadoian, 32, trained as a computer programmer, said he arrived in Glendale two months ago after too many bombings, murders and kidnappings made him lose hope in his country's future. His elderly father remains alone in Jordan, where he had gone in late 2003 to say goodbye to another son who was leaving for the U.S. The father ended up staying in Jordan because the situation in Iraq had begun to deteriorate too badly to risk returning.

Another parishioner said a relative was stoned as he walked down a formerly peaceful neighborhood street because his sister had married an American.

“You guys have to leave; this is not your country anymore,” she said he was told.

“Armenians have been caught right in the middle,” Movsesian said. “We were a respected class as a Christian minority in Iraq. Now, Armenians are left without homes and nobody wants them.”

Newer PostWorking for Armenia with an eye on the future
Older PostRising Star: Ani Kalayjian, Cellist