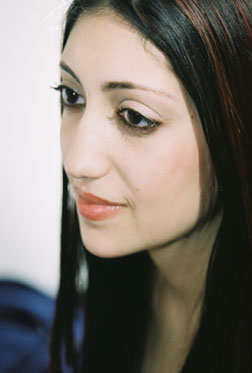 It gives me great pleasure to introduce the young cellist Ani Kalayjian, the daughter of Barkev and Lena Kalayjians of New Jersey.
?
Ani is scheduled to perform at Carnegie Hall on March 31, 2007 (see attached flyer).? She will also perform in Montreal on March 18, 2007.
?
Arpine Kocharian's article, which appeared in various magazines, aptly describes Ani's talent.? Please pass the word to encourage and support another rising Armenian star.?????
?
Artin boghossian

Vivacious, talented and young cellist Ani Kalayjian
?
by Arpine Kocharian, New York
?
“I find the process of being a cellist, and performing with other musicians to be an exhilarating experience.”? Ani Kalayjian
?
Cellist Ani Kalayjian has garnered respect in the classical music world at an age when most artists have yet to prove themselves. At just 25 years old, the Armenian-American talent has had groundbreaking performances in the United States, Canada and Europe, appearing in concert both as a soloist and chamber musician.? She has set the stage for a prolific career having collaborated with many of the world's most famous artists, while expressing her own artistic vision through an impressive repertoire that reflects a wide range of genres and styles.
?
What started as a hobby soon became a true passion for music.?Ani began taking cello lessons at the age of four after she moved to the United States.? Her grandfather, who taught cello in the Middle East, and was involved in the formation of a local orchestra in the 1960s, was an early source of inspiration.
?
Ani's musical studies continued at the Manhattan School of Music preparatory division.?She received her Bachelor's degree in cello performance from the Mannes College of Music in New York City, where she studied with Timothy Eddy, cellist of the Orion Quartet.?Ani went on to obtain her Master's degree with distinction from the Royal Northern College of Music in Manchester, England, where she was a student of Ralph Kirshbaum, international soloist.? Ani's teachers, whom she considers integral to her success, refined her artistry and skills as a professional musician.?She concluded her postgraduate studies in 2006 embarking on an exciting career in music.
?
International exposure to classical music festivals and her myriad experiences have helped shape and impact her direction as a performer. Ani was one of the two cellists selected for the national program of the inaugural season of David Finckel and Wu Han's [email protected].?She has appeared in Michael Tilson Thomas' Aaron Copland workshop at Carnegie Hall where she performed at Zankel and Weill Hall.?At Prussia Cove in Cornwall, England, she was featured in a BBC documentary playing in a masterclass with Steven Isserlis.?In 2003, Ani made her concerto debut at Columbia University's Miller Theatre performing Saint-Saens concerto with orchestra.? Her recent competition success includes winning the Anglo-Czechoslovak Trust competition where she was also granted the Bohuslav Martinu Foundation Prize.?Her 2006 concerts included appearances with the Bayside Trio in Portland, Maine, as well as solo performances in Holland, the Czech Republic, and at Oxford University in England.?Among her upcoming engagements are solo recitals in Montreal, as well as her New York solo recital debut at Carnegie Hall on March 31, 2007 (see flyer below).
?
As well as her ambitions as a soloist, Ani's passion for chamber music is manifested in Trio Nareg where the brilliant young cellist will perform with Ani Kavafian, one of America's most versatile violinists, and pianist, Armen Guzelimian, a virtuoso soloist.?The three celebrated solo artists will perform at the inaugural season of the opening of Segerstrom Hall for the very first time on May 24, 2007.?This groundbreaking musical event will promote Armenian contemporary and classical works.
?
David Finckel, Artistic Director of the Chamber Music Society of Lincoln Center has been quoted with saying, “Ani Kalayjian's music making is infused with her personal warmth. She brings joy into the concert hall and shares it generously with the audience and with her colleagues.? She is an important musician who will undoubtedly touch many lives during her career.”? As a messenger of classical music, Ani wishes to discover seldom played works that have not yet been explored to their full potential.?She is also dedicated in promoting classical music amongst the younger generations.? “I want to educate people of the living power of classical music.?I can say that this is the central goal of my career.”
?
Website of Ani Kalayjian: http://www.anikalayjian.com/
?
Picture: Flyer of scheduled performance at Carnegie Hall on March 31, 2007.
? 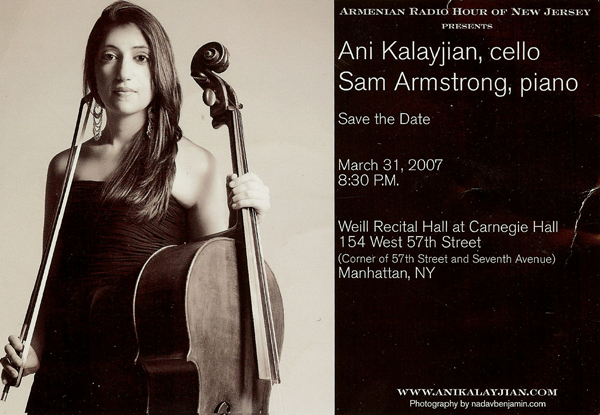