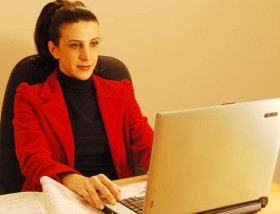 A little bit of Armenia

As an ancient people who have spanned the globe, the Armenians have found a unique way to preserve their identity and yet adapt to new cultures as they moved from country to country for three thousand years. Gulf News looks deeper into the 4.000 strong community in the UAE

Out of the eleven million Armenians in the world, only three million live in the Republic of Armenia. The rest constitute a multicultural diaspora in all corners of the world.

Despite having assimilated well into most of their adopted countries as a result of migration and displacement, the Armenian diaspora has remained distinct in maintaining its identity while celebrating its diversity.

The UAE is one of the few places where Armenians from around the world meet. There is said to have been an Armenian presence in the country since the 1960s.

One of the earliest civilisations

As people who ruled kingdoms and occupied a land many times the size of their current independent Republic of Armenia, the Armenians are believed to have formed one of the earliest civilisations.

But the strategic location of Armenia between two continents subjected it to intervention and invasion by many people, including the Assyrians, Greeks, Romans, Byzantines, Arabs, Mongols, Persians, Turks and Russians, effects of which can be felt in the people's language, food and traditions.

Although Armenia has faced emigration throughout its history – it has a diaspora that is more than three times its population – a major wave of emigration started after independence from the Soviet Union in 1991, which saw almost a quarter of its population leave to look for a better life elsewhere.

But there are some indications that the situation is improving. The country is promoting itself as a tourist destination and trying to lure back the vast diaspora to its ancestral homeland. An increasing number of wealthy Armenians from around the world invest in and travel to Armenia.

The Armenian diaspora maintains its coherence through the church, political groupings, charitable organisations and a network of newspapers published in Armenian and other languages.

A major unifying factor for Armenians in Arab countries and their counterparts in the West is the mass killing of Armenians during the First World War.

Although Armenians have launched major campaigns to have the killings internationally recognised as genocide, Turkey fiercely opposes this, saying they were casualties of war.

For Serine Gharibian, home is Iran, but she loves Armenia “and everything about it”. Coming from a multicultural background, she says, enables her to open up to other cultures. “I listen to all kinds of music, Persian, Armenian, Arabic and Western”.

Since Armenians have been in Iran for centuries, says Gharibian, they have integrated well into the larger society and adopted local customs and traditions, such as Persian food and the Persian language. “I'm fluent in Armenian,” she says, “but my Persian is stronger”.

Armenian assimilation in Iran and the community's long history there means there are marked differences between Iranian Armenians and other diaspora Armenians, says Gharibian. “For example, unlike Armenians in Arab countries, we don't have many descendants of World War One refugees in Iran, so I find that Arab-Armenians identify more with the war's misfortunes. Nevertheless, we in Iran also mark the dates that tragedy fell upon the Armenians during the war”.

The dialect of Armenians in Arab countries differs from Iranian-Armenian dialect too. “They speak Western Armenian, which differs from our Eastern dialect. Some words are difficult to understand because they are influenced by Arabic or other languages.”

Armenians are recognised in Iran as a religiously and culturally distinct community. “We are respected as honest people and are free to practice our culture and traditions. We have all the freedoms we need,” she said.

“I'm Iraqi, Armenian Iraqi,” says Gulizar Jonian, an architect in Abu Dhabi who also heads a weekly Armenian school there. “I am attached to Iraq. The Iraqis treated my grandparents very well when they moved there from Turkey, but Canada has also been very hospitable to me,” said the Iraqi-Canadian citizen.

“What unites Armenian minorities around the world is the Armenian Apostolic Church, and the Armenian genocide,” she said, referring to the mass killing of Armenians in First World War. “We remember the dates and stories very well. They have been passed on through the generations.”

Although Jonian's family adopted the Iraqi identity and learned the Arabic language, her parents and grandparents found it important to instill the family's Armenian identity in her. “If you loose the language, you loose a whole generation. It's important to keep the torch lit.” Similarly, Jonian finds it important to teach her own children their language, as well as the children of many other Armenians living in Abu Dhabi as principal of the Armenian school.

Since it was difficult to travel to Armenia during the Soviet era, Jonian says independence for the state in 1991 was a breath of fresh air for those who wanted to visit their ancestral homeland. “Soviet stamps on our passports could cause trouble before. But that's not the case any more. I love Armenia. We often go there on holiday.”

'We feel welcome in Arab countries'

Hrach Kalsahakian says he is a typical diaspora Armenian. He was born in Greece to Syrian parents and has lived in Lebanon, Kuwait, Syria, Greece and the UAE.

“I am an Armenian from Syria, but like many other Armenians, I have carried something with me from all the places I've lived in.”

Armenians in Arab countries like Syria, he says, have not had conflicting identities. Their identities as Syrian citizens with an Armenian background are at harmony, for which he credits the local Arabs that welcomed Armenians when they migrated to the region as refugees after the First World War.

Kalsahakian attributes this to the fact that Armenians had no land claims there “unlike other [religious or ethnic] minorities that came to the region.”

The positive treatment of Armenians, he says, serves as an opportunity for Arabs to show a different side to themselves at a time when negative stereotypes about them are rife.

“Although Armenians had all the elements of being strangers, they were not treated so. It was more than just tolerance. It was coexistence. This should be a source of pride for Arabs” he said.

Sharjah-based businessman Bedros Arslanian left Ethiopia almost thirty years ago to settle in the UAE. “This is my home now, in a way,” said the 72- year-old.

Back in the seventies, he says, there were under a hundred Armenians in the UAE, mostly concentrated in Abu Dhabi. “Some Armenians from Iran and Palestine have been in Abu Dhabi for more than fifty years.”

Despite an Armenian presence in Ethiopia “for many centuries”, Arslanian has been met with surprise from fellow diaspora Armenians upon telling them where he was from.

“Our community in Ethiopia was small, of about 1,200, but we had been there for a long time,” he said. Armenians integrated well in Ethiopia and were rewarded with high ranking government positions, but most have left now. “We have quality, not quantity.”

Like many diaspora Armenians, Arslanian calls more than one place home, and Ethiopia is one of them. Fluent in Amharic, Arslanian was born and brought up in Ethiopia and often visits family there. “I have many memories there. Sometimes I feel like I belong there. I miss it,” he says. The Republic of Armenia, which he visits every two months, is also home.

“After so many years, we've got our own country and our own national symbols, of which we are very proud.” Although he doesn't feel the need to get Armenian citizenship, Arslanian says he might take it one day “for symbolic reasons.”

Armen Kostanyan is an exception in the Armenian community. He's an “original” Armenian, as he calls it, and not from the diaspora that a majority of the world's Armenians constitute.

Speaking in a heavy Eastern European accent, Kostanyan tells of being an Armenian citizen among the many Armenians in the UAE who come from various countries.

He found noticeable differences among members of the Armenian diaspora he has met in the UAE.

“For one, they are much closer to the church,” he said. Soviet rule in Armenia before independence in 1991 led society to become strictly secular.

While Armenians in their homeland were made to part with their church, those living as minorities outside Armenia used the church as a unifying factor.

The diaspora, however, is bringing diversity to the relatively new, independent Armenia, said Kostanyan. Armenians who are going to their ancestral homeland to invest and live are bringing with them a piece of their adopted homelands.

“We now see a number of shisha restaurants and American style homes that are being bought by diaspora Armenians. There's a construction boom in [the capital] Yerevan,” he said.

Kostanyan also feels that the Armenian diaspora have a more “hardline” approach to Turkey than the average Armenian citizen.

“Some Armenian citizens even go to Turkey on holiday. The diasporic Armenians are the ones who suffered directly in the First World War, and that explains their attitude”.