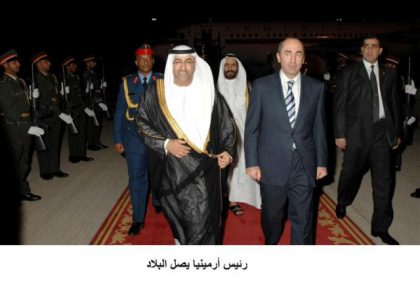 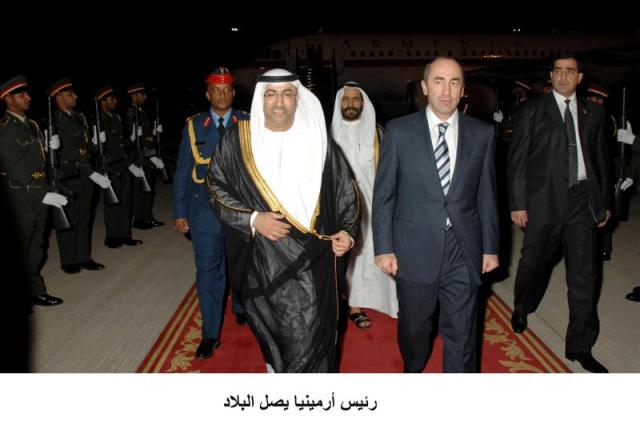 Armenian President, Robert Kocharian, arrived in Abu Dhabi on 11 December 2007 on an official visit to the United Arab Emirates. The visitor was received at the airport by Minister of Culture, Youth and Community Development Abdul Rahman Al Owais (see photo on the left), UAE Non- Resident Ambassador to Armenia Khalifa Shaheen Al Marri, the Armenian Ambassador to the UAE Vahagn Melikian and a number of high-ranking officials.

President Robert Kocharian was accompanied by a delegation including Armenian Foreign Minister Vartan Oskanian, Minister of Trade and Economic Development Nerses Yeritsian and a number of other Armenian officials.

On 12 December 2007, Sheikh Khalifa bin Zayed Al Nahyan, President of the UAE, welcomed the Armenian President and the accompanying delegation and wished them success in their visit which, he hoped, will pave the way for enhancing bilateral relations between the two countries in various avenues.

During the talks, which took place in Al Mushrif Palace with the presence of Crown Prince of Abu Dhabi General Sheikh Mohammed bin Zayed Al Nahyan, the leaders reviewed the standing cooperation between UAE and Armenia and explored ways for expanding its horizons serving the interests of both countries in various fields, especially in the fields of economy, investment and tourism. Kocherian and Khalifa also exchanged views on a number of regional and international issues of mutual concern.

Armenia and UAE signed on 12 December 2007 five agreements to enhance joint cooperation in areas of foreign policy, agriculture, culture, tourism and transportation. The two Foreign Ministers signed a Memorandum of Understanding (MoU) for establishing a mechanism for political consultation and coordination on bilateral relations as well as on regional and international issues of mutual concern.

The two countries struck an agreement for cooperation in tourism and another one for establishing embassies was also initialed.

Robert Kocharian and Sheikh Mohammed bin Rashid Al Maktoum, Ruler of Dubai and Vice President of the UAE, discussed bilateral relations and ways to strengthen cooperation between the two countries. Kocharian said he was impressed with the progress achieved by the UAE. He also praised Sheikh Mohammed in transforming Dubai into a vibrant world-class destination.

Sheikh Mohammed welcomed the country's guest and stressed the need to develop ties to a full fledged partnership.

The meeting was attended by Sheikh Ahmed bin Saeed Al Maktoum, Chairman of Dubai Civil Aviation Authority and President of Emirates Airlines and other officials.

Earlier during the visit, President Robert Kocharian inaugurated the new premises of Armenia's embassy in Abu Dhabi, in presence of senior UAE officials, diplomats and members of the delegation accompanying the Armenian leader.

Speaking at the opening ceremony, Armenian officials praised the progressive ties between the UAE and Armenia and thanked the UAE for providing all facilities to set up the embassy, the foundation stone of which was laid three years ago.