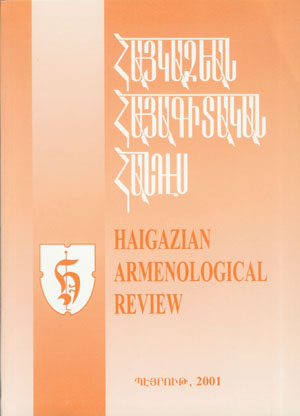 On Thursday the 14th of May 2009, Haigazian University Armenological Review?s 29th volume was launched, in the presence of University President, Rev. Dr. Paul Haidostian, Lebanese Member of Parliament, Dr. Yeghia Jerejian, and a number of community intellectuals.

The program opened with the welcoming words of the Review?s Editorial Board member Mr. Armen Urneshlian, who highlighted the important role of this yearly gathering of Armenian intellectuals to celebrate the new release of the Haigazian University Armenological Review, and to discuss matters that concern Armenian studies.

Keynote speaker, MP Dr. Yeghia Jerejian, highlighted on the pivotal role the Ministry of Diaspora in Armenia is playing regarding Armenian Studies, and surveyed the basic prospective problems and the means of addressing these problems.

Editor in Chief, Father Antranig Granian took pride in the 29th volume, considering it as a major achievement in its scientific approach and content, and the seriousness of the research papers.

The 29th volume of the Haigazian University Armenological Review is composed of 484 pages, and includes 7 research articles, 3 briefings, 2 unpublished documents, 3 book reviews, 4 scrutanies, 13 necrologies, and a list of books and periodical acquisitions of the University?s Derian Armenian Library.

Its aim includes the promotion of original and unpublished research and scientific work in linguistics, literature, bibliography, history, culture, arts, medieval studies, Christianity and international relations. Its international contributors hail from France, UK, North and South America, Armenia and the Middle East and have included numerous important academics in the field.