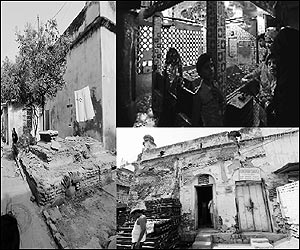 From a distance, it almost looks like a mosque, complete with a dome and mini minar or chhatri-like projections on its four sides, of which only two have survived. Its peeled-off plaster and dilapidated state reveal layers of slim bricks dating back to the later Mughal period. A closer look and one can spot a plaque announcing the Armenian Association in Kolkata as the trustee of the place. A faded signboard identifies the building as a nearly three-century-old Armenian chapel.

Located near the Kishanganj Railway Station in Sarai Rohilla area, this is the only surviving Armenian place of worship in the city. Built most likely around 1781-82, this rundown building and some tombs at its back survived the Revolt of 1857 only to be encroached upon by a colony that?s now called the ?Christian Compound?.

The place was not always as congested as it is now. Professor A. Dasgupta, a retired Delhi University teacher, has fond memories of a quiet cemetery and a medieval structure adjoining it when she stayed in the vicinity as a child. ?The solitude, the all-pervading silence and shaded greenery of the cemetery, the adjoining kuchcha road with no habitation, except the railway colony, are part of my cherished memory of the place. Every day, I was taken for a morning walk to the place. Of all the graves, that of a six-year-old girl used to haunt me?perhaps because I was a child myself,? she says.

Now, the cemetery has been almost eaten up by encroachers and flower pots, unused cans and discarded mattresses lie on the graves. The chapel does not figure in the ASI list of protected monuments. The local residents, however, say that they have been ?protecting and preserving the church?.

?We?around 60 Christian families?have been living here for 40-45 years and this is our church,? says Vinod Dayal. ?A priest comes here from Tees Hazari for the Sunday service,? says Michael. Asked about tombs and tomb stones, they say that some have been taken away by ?the government authorities and some have just fallen apart?.

Inside the chapel, white-washed arches have the Cross below them. Outside, narrow pathways lead to a cluster of small homes and courtyards with a grave or two.

The Catalogue of the Delhi Museum of Archaeology, complied by J.P. Vogel in 1908, and Armenians in India, by Mesrovb Jacob Seth, mention the chapel, the cemetery?identified as Deramao?and tombstones, some of them in Persian. The oldest grave is dated 1782 by these authors. Father Gregorio, who baptised Begum Sumru of Sardhana (her haveli in Chandni Chowk turned into Bhagirath Place), was also buried here in the early 19th century.

Unlike Kolkata, which has an Armenian community and where the Armenian Church is a prominent landmark, Delhi?s Armenian connection is almost erased. The Armenians came here during the Mughal period and even held important positions in the emperor?s court. An Armenian trader who became a Sufi poet and a prominent voice of dissent during Aurangzeb?s reign, Hazrat Sarmad, lies buried opposite the eastern gate of Jama Masjid, along with his guru, Hare Bhare Sahib or Sayyid Abdul Hasan.

Sarmad, also known as the naked fakir, had a follower in Dara Shikoh, Shah Jahan?s eldest son. The Sufi was beheaded on Aurangzeb?s orders, because he refused to comply with existing religious and societal norms. His tomb was painted red, denoting his martyrdom; his mentor?s tomb was painted green, signifying hope. Poets and qawwals continue to throng the twin tombs during the annual Urs.

Armenian places of worship are believed to have existed pre-1739 when the plundering troops of Nadir Shah destroyed most of these places. Armenians like Col Jacob Petrus fought against the British and controlled places like Gwalior.

Today, of course, all this is either part of history books or of only archival value. The chapel in Kishanganj, the last surviving relic of Armenians in Delhi, struggles to survive uncared for and may also die a slow death, unnoticed by most.

Photo mix: The chapel; the tomb of Armenian trader and Sufi poet Hazrat Sarmad; graves at the back of the chapel, encroached upon by what is now called the ?Christian Compound?

Read Dr. Omar Khalidi's research titled Armenians in Mughal Delhi (with 16 photos). The research is originally published in the “Journal of the Society for Armenian Studies” 15 (2006): pp. 177-187.  Reprinted in Azad-Hye with permission.

Dr. Omar Khalidi of the Aga Khan Program for Islamic Architecture at the Massachusetts Institute of Technology gave an illustrated lecture entitled ?Three Centuries of Armenian Heritage in India,? at 8 p.m. on Thursday, 04 June 2009, at the National Association for Armenian Studies and Research (NAASR) Center, 395 Concord Ave. in Belmont, Massachusets, USA.

Though Armenians were in India from early times, the Armenian presence in India is well-documented from the 16th century, after the establishment of the important mercantile community in New Julfa in Persia. The community grew in size and importance in the 17th and 18th centuries, with many Armenians rising to positions of prominence, and publishing and the arts thrived.

Dr. Omar Khalidi has a Ph.D. in Islamic Studies from the University of Wales. Born and raised in Hyderabad, he is the author of several books and articles on art and architecture and Indian politics and history, including ?Approaches to Mosque Design in North America? and Muslims in Indian Economy. He was invited by the Armenian Church in Calcutta for its 300th anniversary celebration in November 2008.