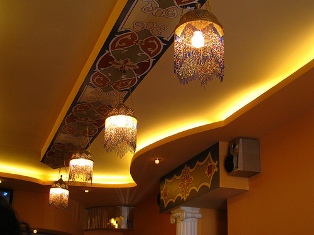 With a welcoming smile, the waitress is handing me the menu with a list of Arabic words written in Armenian, English and Russian letters. These words sound pretty odd in Armenian, however many Armenians already know them very well. ?What will you order?? my friend asks me, ?perhaps fattoush or mouhammara or baba ghanouj??. ?No?, I say, ?it?s falafel day!?.

Since the end of 1990s when Arabic food appeared in Armenia first thanks to the repatriated Middle Eastern Armenians, Arabic food names became an inseparable part of the Armenian reality.

These Armenian-owned restaurants serve delicious food for quite affordable prices. The most popular food kinds are hummus, fattoush and falafel. Armenians have recently found out with surprise that such food as lahmajo (lahmajoun or lahm bi-ajin) and shaorma are not of Armenian origin, but come from Middle Eastern countries.

We are sitting in one of a dozen Arabic restaurants in Yerevan. Armenians call “Arabic” all restaurants that serve middle eastern food, should it be Syrian, Lebanese, Jordanian or Iraqi. I look around and explore the walls of the restaurant. They are decorated with photos and pictures of famous sights from the Middle East. A wooden camel placed on our table look at me with a bored gaze. It witnesses many people come and go every day. Our neighbors at the next table speak in English. “It is funny to hear them pronounce Arabic words with an English accent when they order food”, I think. Then I realize, it should sound equally funny for an Arabic-speaker to hear me pronouncing the same words.

Arabic restaurants in Yerevan are usually full of visitors who love to meet new people and taste new food at the same time. The small Arabic restaurant we are sitting in, hosts only few tables, so close to each other, that you can overhear nearby conversations. You might even hear your neighbors speak about people you know, perhaps your friends or colleagues. This is a small world, and Yerevan is a really small city. There you go, asking your neighbors about the mutually known person and in no time, the two tables join together, to bring an all-new level to this ?cosmopolitan? Armenian conversation.

By the end of your dinner, you will perhaps order strong black tea, served in typical Middle Eastern little glasses. Some will order nargile (smoking pipe known as shishah in the Arab World). Unlike Middle Eastern countries, where it is experienced by men and women alike, shishah still remains as something uncommon in Armenia. Perhaps this is the reason why women in Armenia prefer to leave this part of the Arabic food ritual to men.

Armenian-owned Arabic restaurants are also a favorite spot for Diaspora Armenians.  Syrian, Lebanese and Iranian Armenians, who study in Yerevan Universities or simply visit the country during their summer vacations, feel comfortable in these restaurants: a little piece of their home in the heart of the motherland.

Photos by Ani Melikyan:
1) Design of the ceiling of a Syrian restaurant in Yerevan.
2) Yerevan at daytime.
3) Yerevan at night.