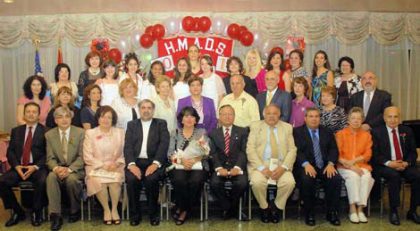 Principal Zarmin? Boghosian opened the ceremony after the graduates made a soulful entrance to “Pomp and Circumstance” under choir director Mrs. Anahid Boghossian and pianist Mrs. Nevart Zeronian. Mrs. Boghosian reminded the graduates that they are leaving HMADS with not only a strong academic background, but also a strong moral background rooted in respect.

She told the six graduates – Deborah Agopian, Andre Der Artinian, Kristina Gomez-Shnorhokian, Diana Haroutunian, Anoush Minassian and Natalie Vantian that their names are a direct reflection of first and foremost themselves and their character, followed by a reflection of their families, and lastly as a product of their alma mater.

Alumnus speaker, Nazareth Markarian Esq. (Class of 1996/Graduate St. John's University School of Law), further elaborated on Mrs. Boghosian's message stating that his education at HMADS not only made him a more well-rounded person, but also “a better Armenian” and ambassador of Armenian culture. He encouraged the graduates to remain active in their community as they continue their education in secular, non-Armenian schools.

In following with tradition, the Class of 2010, under the careful direction of their proud teacher Mrs. Janet Marcarian, presented a series of Armenian and English poems, followed by a “thank you song” to their parents. The Armenian portion of the program under the supervision of Mrs. Houri Ghougassian was dedicated to three intellectuals: Hovhannes Toumanian, as poet of All Armenians”, Daniel Varoujan – to remember the martyred intellectuals of 1915 Genocide, and Khatchig Dashdents to celebrate his centennial.

The graduates then received their diplomas. New York state senator Frank Padavan offered congratulatory words for the graduates and praise for the Armenian community. The audience appreciated the humor with which Mr. Padavan delivered his words, even mentioning that he was thinking of changing his name to “Padavanian!”

Adrienne Alexanian, recipient of the 2010 Ellis Island Medal of Honor, was this year's guest speaker. Ms. Alexanian is a former teacher and has held positions in the executive committees of Armenian Church youth organizations. She has organized numerous workshops, initiated and chaired the commemoration of the 1700th anniversary of Christianity event at the United Nations. Her dedication is all in honor of her parents- benefactors of the Armenian Community: Edward & Grace Alexanian. Her message to the graduates focused on the importance of volunteering and remaining active members of the Armenian Church and larger community.

Principal Boghosian then acknowledged Fathers' Day and honored the HMADS Father of the Year: Mr. Siragan Varolian for his selfless service to the Day School throughout his involvement with the Friends of HMADS Fundraising Committee. Mrs. Boghosian gave a brief history of the incredible story of his upbringing in a Turkish home only to discover at age 13 that he was Armenian!

Boghosian presented Special HMADS Certificates to Hagop Yegnukian who attended HMADS up to 5th grade and moved to Armenia last summer with his family and to Christina Vandian for her outstanding contributions in the field of arts (high school level) bringing honor to HMADS.

Very Rev. Fr. Vazken Karayan, the pastor of the Holy Cross Armenian Church of Union City, New Jersey, was present to offer the final benediction to the graduates -including his niece- and their families.

HMADS has closed its doors on yet another academic year and will take a hiatus until September. The tradition of superior academics while fostering the culture and language of Armenians will resume.