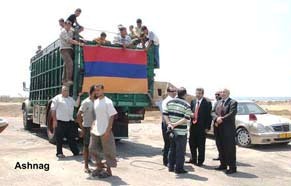 In the following letter Rev. Paul Haidostian, President of Haigazian University (Beirut) describes the situation in under the Israeli attack and the effect of war on the Lebanese society.

Rev. Haidostian believes that ?this war has created a shift of the Lebanese, Middle Eastern, and generally Muslim political center, wherever it existed, to radical positions?. After mentioning in detail the results of the war, he expresses hope for the future.

Below is the complete text of the letter:

On my original schedule for today, the annual staff picnic of was to take place.  Now, I am simply grateful that most members of our staff could come to work and perform their tasks albeit with minimal efficiency.  We still have no idea when it will be possible to resume the Summer Session and whether the Fall 2006-2007 Semester will start on time.

Throughout the country, aid work in support of the refugees has been better organized now than it was in the past weeks, including the small efforts of the .  Prayer groups have been organized in and around churches, including a daily time of prayer for the Haigazian community.  Denominational and regional barriers among the people working for and with each other have thankfully dropped to a minimum.  Bombing has continued in the past days but focusing mainly on the South and the Bakaa.  Cars, trucks, communication centers and neighborhoods have been occasionally targeted.  The number of the civilian victims in has exceeded 500.  The bombing of the Jiyyeh power plant which served Southern Lebanon has resulted in a 15,000-ton oil spill in the causing a major environmental disaster.  The fear of the spread of skin and other infectious diseases has invited the attention of healthcare workers and volunteers in the extremely crowded refugee centers all around.

Despite all this, some parts of the country have enjoyed relatively quiet days thus allowing many to conduct the necessary duties or report to work.  has been a resourceful country in many senses, and it continues to be so even in hard times.  In general, life in has become once more and hopefully only for a few weeks a competition between emergency and normalcy.

It has been seventeen days, and we still wonder what this war is all about. It has certainly not accomplished the aims listed two weeks ago.  On the contrary, this infamous round of violence has so far resulted in:

– Hundreds of deaths and thousands of injuries;

– More than 2 billion dollars of damage to the infrastructure of this small country;

– A huge and ongoing loss of investments and business opportunities for every family, every town, and every company;

– Up to 800,000 displaced people in a country of 4 million, thousands of whom will have no home to return to;

– Major damage to the environment;

– Long term damage to the reputation of ;

– Loss of trust in the young Lebanese generation for a safe future in the ;

– Emotional and stress-related problems in families;

Most dangerously of all, this war has created a shift of the Lebanese, Middle Eastern, and generally Muslim political center, wherever it existed, to radical positions. The centrists have found their arguments to be obsolete and unattractive, while the radicals have found their fundamentalist reading of the “enemy” and the “world” to be both attractive and justified. I am sad to notice that the current war on has hindered the general movement of the Lebanese youth towards democracy.

Still, we are full of hope. Yes. The task of reconciliation, the challenge of looking analytically at issues, our duty to be interpreters of the Western and Eastern worlds to each other, and the possibility for the youth to look at matters from a wide perspective will be very difficult. But as long as we, as Armenian and non-Armenian churches in the , have opportunities to work, minister, teach, and serve, we can believe in beneficial change. As long as we have faith in a God who leads, inspires and empowers us, and as long as we can create, recreate and preserve the communities of faith as genuine resources of our ministry, we will have reasons to remain thankful and engaged.

Many of us have been repeating in the past days that the people of will overcome this crisis too. We repeat this not out of ignorance of what is said and written about the future.

As Christians, our hope should also be a plan, an intention, and an action. Faith is to be put to work.

Your accompaniment of our communities has meant much in the past weeks.  Continue to pray with us for peace in our community as well as yours.

Photo: The humanitarian aid of the Armenian government has reached . Ambassador of to Lebanon Vahan Ter-Ghevondian said to the Armenian press that 7.5 tons of humanitarian aid (mostly medicine) was airlifted from to and from there was carried by a truck to the Lebanese border. The value of this aid was estimated at 100 thousand US dollars. PHOTO FROM AZTAG DAILY.