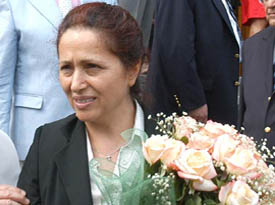 President Robert Kocharian publicly honored on Monday the assassinated Turkish-Armenian journalist Hrant Dink with a posthumous state award granted each year to prominent individuals in recognition of their contribution to Armenian culture and science.

Dink was among 18 writers, artists, and scientists awarded this year from a special presidential endowment set up with the help of French-Armenian philanthropist Robert Bogossian in 2001.

Kocharian singled out the late editor of the Istanbul-based Armenian weekly ?Agos? for special praise as he addressed a solemn award-giving ceremony in his office attended by Dink?s wife, daughter and brother. He cited Dink?s contribution to ?restoration of historical justice, mutual understanding between peoples, freedom of speech, and protection of human rights.?

?It was a big loss for our people,? Kocharian said of the editor?s shock assassination. ?I want to assure members of his family that we will always remember Hrant Dink, that Armenia is also a home for his family, that we are always happy to see them in Armenia,? he added.

Dink?s widow Rakel was given a standing ovation as she received the $5,000 prize from Kocharian. ?We will find the power to endure our pain,? she said in a brief speech.

Dink was shot dead outside the ?Agos? offices in Istanbul last January by a young ultranationalist Turk furious with his public references to the 1915 mass killings of Armenians in the Ottoman Empire as genocide. The murder was universally condemned in and outside Turkey and led to an unprecedented outpouring of sympathy for Dink, his family and Armenians in general by tens of thousands of ordinary Turks. But it also provoked a nationalist backlash, raising questions about the security of the country?s small Armenian community.

Speaking to RFE/RL, Rakel Dink said she and other members of her family are not yet considering leaving Turkey despite mounting security concerns within the embattled community. Asked whether they might eventually emigrate to Armenia, she said: ?It could happen, but there is no such urgency now.?

Last Thursday Turkish prosecutors called for a prison sentence of up to three years for Dink?s son Arat, who now edits ?Agos,? and his colleague Serikis Seropyan for republishing a 2006 interview in which his father made a case for genocide recognition. They accused the two men of ?denigrating Turkishness.? Hrant Dink was given a six-month suspended sentence on the same charge several months before his assassination.

At a court hearing in Istanbul, Arat Dink accused judges of contributing to his father's death by making him a target thanks to their high-profile judicial proceedings. “I think it is primitive, absurd and dangerous to consider as an insult to Turkish identity the recognition of a historic event as a genocide,” he said, quoted by the Anatolia news agency.

Reporters Without Borders condemns the decision to prosecute Arat Dink, the son of slain Turkish-Armenian journalist Hrant Dink, and three other journalists employed by his newspaper, the weekly Agos, for ?insulting Turkish identity? under article 301 of the criminal code.

The Istanbul prosecutor?s office requested a six-month prison sentence for Arat Dink when he appeared in court yesterday in Istanbul as his father?s successor as editor of Agos. The three other Agos journalists charged with him are Serkis Seropyan, Aydin Engin and Karin Karakashli. Dink?s father was gunned down outside the newspaper on 19 January.

?Once again we have to denounce the use of article 301 of the criminal code, which is a threat to freedom of expression,? Reporters Without Borders said. ?A prosecution was also initiated against Erdal Dogal, one of the Dink family?s lawyers on 7 June.?

Agos? staff is being prosecuted for republishing an interview Hrant Dink gave to Reuters in July 2006 in which he referred to the 1915 Armenian genocide and urged Armenians ?to turn now towards the new blood of independent Armenia, which alone is capable of freeing them from the weight of the Diaspora.?

Prior to his murder, Hrant Dink received a six-month suspended sentence for these comments, which the newspaper reproduced as part of a series entitled ?The Armenian Identity.?

The trial of 18 people accused of participating in Hrant Dink?s murder is due to open in Istanbul on 2 July.