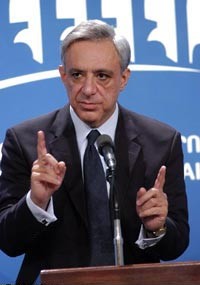 Armenian Foreign Minister Vartan Oskanian said on Tuesday that his country will continue cooperation with Iran in different fields.
?
Oskanian also told reporters that bilateral relations between Iran and Armenia have always been transparent, adding there is no reason for the US to be concerned about such cooperation.
?
He further referred to the negotiations between Armenia and the US on different political, economic and security issues, saying that the two countries have no differences including on Armenia's relations with Iran.
?
The US Charge d'Affaires to Armenia Anthony Godfrey expressed his country's concern about the expansion of cooperation between Tehran and Yerevan.
?
“Washington has conveyed its concerns about the issue to the Armenian officials,” he said.
?
Source: Islamic Republic News Agency (IRNA)
Tuesday June 19, 2007
http://www2.irna.ir/en/news/view/line-17/0706198292175220.htm

Newer PostHrant Dink honored with an after death state award
Older PostHagop Vanesian: On the path of earlier generations of silversmiths