Love is any number of emotions related to a sense of strong affection.

The word love can refer to a variety of different feelings, states and attitudes. As an abstract concept, love usually refers to a deep feeling of tenderly caring for another person. The English word “love” can have a variety of related but distinct meanings in different contexts. Often, other languages use multiple words to express some of the different concepts that English relies mainly on “love” and eventually it is used as the only “international language”, overriding cultural and linguistic divisions.

To him Love is a strange feeling that can be one of the most amazing in the world.

Sometimes the emotions associated with love are blissful, but there are times when they can really hurt. In the end, love is something most of us, if not all of us, will encounter. When you say the words “I Love You”, they should carry the desire to show someone that you love him or her, not what you simply want to feel. Just make sure you really mean it and are willing to do anything for that special person.

Azad Hye covered the event and had this conversation with Carlos:

Why are you emphasizing by focusing on the unconditional love?

For me, unconditional love is not related only to the other half that you always try to find. It can be your homeland, your friends and dearest ones. As Armenians, it can be our history, our habits and traditions and our music in its various types.

In this exhibition I?m trying to transform all my feelings to images presented in a contemporary and interesting way, so that an observer doesn?t get bored when standing in front of each one.

We noticed that the first section of your exhibition was dedicated to Syria; what is the reason behind this?

As much as I?m thrilled to be 100% Armenian, I?m very proud to be Syrian as well. 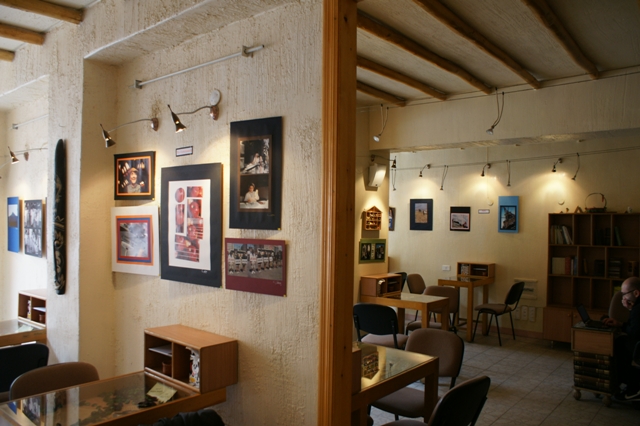 Despite being a beautiful and fascinating place, Syria remains fairly anonymous. What?s more, what people think they know about this country is often very wrong. The difference between the perception and the reality of Syria is huge. It is one of the few places in the world that combines magnificent archaeological sites in a land that changes from sea to desert. It?s also a peaceful and safe place, in a region known for conflict; this is a country that combines various branches of Islam (Sunnite, Shiite, Alawite, Druze, etc.) with different sects of Christianity (Eastern Orthodox, Protestant and Catholic, etc.).

Perhaps Syria?s most amazing asset is its archaeological wealth. The country has seen the Bronze Age and witnessed the creation of the first alphabet in the world. Since then, every great civilization has stepped foot in Syria. From Alexander the Great, the Romans, Queen Zenobia and the Byzantines to the Crusaders, the Ottoman Turks and finally the French. I am using my photographs to explore this wonderful country, my second homeland.

And what about Armenia, the biggest section in your exhibition?

In this section I?m trying to demonstrate some of the tremendous richness that Armenia has in history and religion with a contrast of contemporary scenes, including street images, traditions and lifestyle. My aim is to show what makes Armenia such a uniquely pleasant place, besides the abundant sense of hospitality and the warmth and friendliness of its people.

Yerevan has always captured me with both its dark and bright sides. The city went through different political and economical changes that affected its population and the way of living, especially the sudden currency devaluation few years ago. 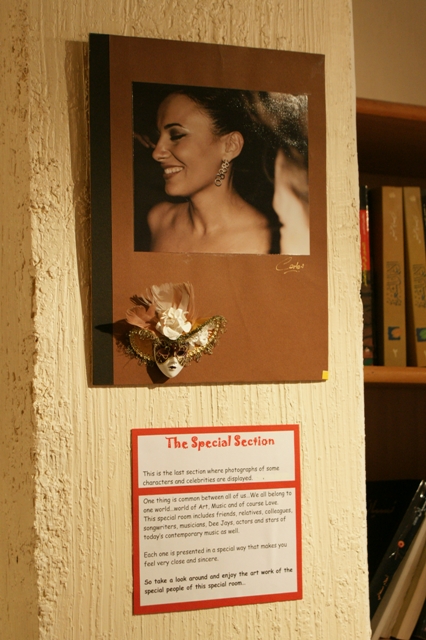 There is a big selection of churches and khatchkar photos presented in a unique way. Khachkar (literally cross-stone in Armenian) is a uniquely Armenian form of art, which evolved into delicate ornate forms, reaching its peak development in the 12-13th centuries.

Some of the most intricate known khachkars were designed by the great architect Momik. He also is credited with the design of the Areni Church and Noravank Monastery. Khachkars are most commonly used as tombstones, but were sometimes used as memorials. The biggest khachkar cemetery in Armenia is the Noratus Cemetery, while the biggest in the world is in Jugha, in Nakhichevan (recently destroyed by the Azeris).

Most khachkars fall under the basic definition of a cross carved onto a stone. A few of the highly detailed and elaborate khachkars are called “lacework” khachkars. Khachkars which are freestanding crosses are called “tevavor” with arms khachkars. There are probably thousands of khatchkars in Armenia and like snowflakes, no two are identical.

In Armenia you will always find yourself surrounded with monasteries and churches with centuries-old khatchkars in the churchyard and candles lit inside. The majority of churches and monasteries in Armenia date back between the 7-14th, after the Arabs were driven out from Armenian and before Tamerlane pillaged the lands, although a few are older and many are more recent, or at least more-recently redesigned, restored, or repainted. Many of them are located in hard-to-reach places; a reason why the highlands of Armenia have probably remained Christian.

In my exhibition, there is no specific order and each photograph is independent from the other; this has been done to allow the visitor to browse in any order you wish. The aim is not to force the visitor to fix at the image series, but rather to allow to roam through the wonderful landscape in innovative way, even for those who have been in Armenia before.

And the ?Unreachable Ararat? section?

First time I saw Mount Ararat I cried and kept taking photos from the airplane without noticing that within two minutes I finished a whole film. At that time the digital camera was not known (laughing). Every time I look at Ararat I admire its beauty and keep staring for hours without feeling bored or tired.

Although it is unreachably very far but Ararat still belongs to us and it has a special place in each Armenian?s heart. That?s why all Ararat pictures in this section were shown under a rolled barbed wire to emphasize this idea.

My dream is to climb this huge mountain, but I?m not sure when I will be able to fulfil this dream?

The ?No comment? and ?Appreciating other people? sections were criticized by many people. Can you tell us the reason?

?No comment? includes images from different parts of the world with different topics not related to each other. Some people said those images had nothing to do with the entire exhibition. But since the show is all about love, then all I can say is that I love each of the displayed weird photos. Besides, all of them were made and prepared with only love as motivation.

?Appreciating other people? presents 3 photographs from which none was captured by me, but displayed and interpreted in my way.

One of the most beautiful images of Mount Ararat is captured by Vrej Kaprielian, my uncle. He is an amateur photographer, but had his moment during the shot. 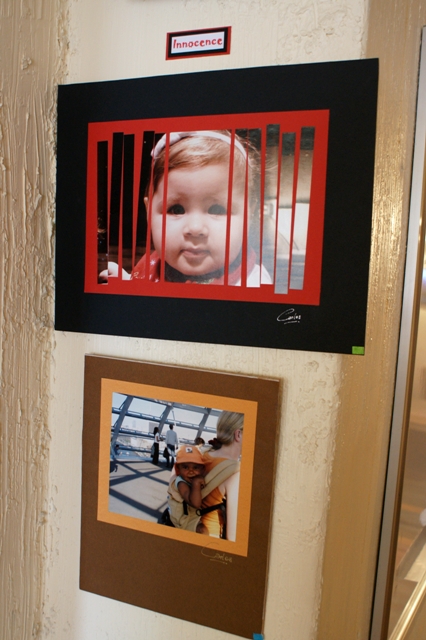 One of the talented photographers whose works are very unique and remarkable is Angelique S.  The composition displays a four images sequence called ?Conversation? taken from her last exhibition entitled ?Conversations? in November 2009.

And the only photo of me sitting next to a khatchkar in Goshavank church, taken by Sonia Kaprielian, my mother.

The criticism was that I should not display other peoples? work in my own exhibition, because, the argument says, there should be no place for compliments in art. But, according to my viewpoint, appreciation is too far from being considered as a compliment. Besides, if the idea is seen as a compliment, then whom I was complimenting? My mother, my uncle or one of my dear friends?

Tell us a bit about ?The Special Room? and what makes it special?

This is the last section where photographs of some characters and celebrities are displayed.

One thing is common between me and the displayed characters; we all belong to one world?world of Art, Music and of course Love.

Each one is presented in a special way that makes you feel very close and sincere. For example the DJs are displayed on vinyl shiny records. There is a scarf of musical notes hung above the image of Suzan Markarian that makes the photo as high class as she is. And there is a special work of glass added to some photos; in itself a new experience for me too.

Inside ?The Special Room? there is a very small division called ?People in love?. It shows photos of couples who really are in love.

Men and women may be equal in what they represent but different by nature. People who truly are in love give their mates “space” to develop their potential and find their fulfilment in life. People who are 100% in love control their anger when the other displeases them. We are all humans, and we are inclined to feel anger periodically, but our anger may be expressed in destructive ways, if we exploit others. People who truly love each other are deeply unhappy with the disappointments and failures of their mates. They treat their mates with absolute trust and do not allow their problems to rob them of their happiness.

Will the next exhibition take 3 years for you to prepare it?

(Laughs loudly) Actually the idea of this exhibition existed right after ?10 Years… Armenia? but the problem was finding the right place to exhibit. I don?t like exhibiting in big fancy galleries, with a big crowd at the opening ceremony that is attracted into the event by mass invitation. After the opening you will hardly see 10-15 per day throughout the exhibition.

Fortunately ?Art River? was the perfect option, where you meet all kinds of people with different interests besides those attending the opening day. I am very thankful for the owners Saghatel and Harout Bassil for their sincere hospitality and being very helpful.

To fulfil your curiosity, I would tell you that there is an idea of a joint exhibition together with other photographer. At this point, I am not going to give you more details, since the idea is new in my mind.

Azad-Hye wishes Bourdjian all the best and looks forward to share with the readers more of his activities.