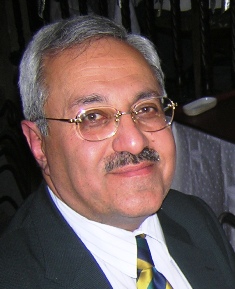 The founder of the biggest private Armenian publishing house in the Middle East:  “Our main problem is the distribution of the Armenian book”.

Can you describe in details the circumstances that lead into the establishment of the Cilicia (Giligia) Publishing House?
It started in the year 1980. There was a book vendor in Aleppo, previously a teacher from Jarablos, called Mgrdich Khoja. His nickname was ?Haygagan ? Badvagan?, because he used to shout ?Haygagane ? Badvagane? (It is Armenian, it is honorable) when selling books in the street. He lived in Gorun Armenians camp and used to carry two bags full of books when going around for his sales. Later when I had the chance to look into his accounts, I discovered with amazement that he has really sold a big quantity of books. He was a fantastic seller, going from shop to shop and creating excitement about books according to the interests of the people. It is a method that now after 50 years from the time he started is becoming fashionable, but he used to do it then, when this was relatively an unknown method of selling. For example if you want the series of ?The Memoirs of Roupen Der Minassian? published by Hamazkayin, he will accept the order and bring all the series and will encourage the sale by introducing payment by weekly installments. Many workers admitted later that Mgrdich Khoja was the reason they built up libraries in their households. He used to sell encyclopedias, dictionaries and mostly popular publications such as dream or star interpretation books, anecdote books such as Khoja Nasreddin, etc. It is natural that those who were immigrating or desiring to sell their old books used to ask his services. Besides the new books, he had also a big store for old and used books, textbooks, rarely found editions, philology books, scripts, paper clips, etc.

Someone told me that Mihran Minassian was interested to buy all that Mgrdich Khoja had left after his death. Mihran was looking for someone to share the expenses with him. The required price was around 40 thousand Syrian pounds (the equivalent of 10 thousand US dollars at that time). I was not ready to pay that amount of money alone either. I was interested in books. Also Mihran had similar interests, especially in philological books, scripts and old writings. The bookstore owners in Aleppo were pretending to be indifferent towards Mgrdich Khoja's books, hoping to undercut the price. After the 40 days mourning period we paid a visit to his widow and agreed to buy everything for 39 thousand Syrian pounds. As soon as we bought it we stayed in the house. We could not leave before emptying the two-three rooms which were full of books. The widow went to her relatives and left us alone to finish the job. We managed to use 3-4 cargo vans and carried all the goods to one of the empty rooms in my father's office [well known ex-member of the Syrian parliament Krikor Eblighatian]. The room became so packed that we were obliged to fix shelves and bring in appropriate furniture. Eventually the place turned up to be a bookstore. Interested people started to ask us about certain volumes. We priced the books and started selling them, thus we found ourselves in the book selling business. After satisfying our own interest by keeping to ourselves some of the books, we found out that there were many-many books. Few months later we went to Beirut and made an enquiry about how to import books and sell in Syria. We used to dedicate some time after our normal working times for this. Mihran was working with his father in the car spare parts business in the industrial zone of Ramousia in Aleppo at that time, serving meanwhile as a soldier in the army. Few years passed and the business was down at that time and our interest faded. But there were many books under my disposal. In 1985-86 the economic situation in the country obliged me to change my business. The importing of old clothes was banned. The book selling work came into the center of my interest and I started looking at it seriously as a potential business. In 1988 I bought a small bookshop near the present location of ?Cilicia? bookshop. At the same time I and Mihran parted after mutual agreement. My book selling business started to develop. In 1992 I received official licence as publishing house. In 1993 I moved to the present location [in Soulemaniah Street].

How many volumes you managed to publish until today?
Up to this date we published around 100 books as our own (?Cilicia”) publications. Since 1994 we started publishing orders made by private individuals or associations. The number of such books is about 70. At the time being there are about 20 books under different phases of publication. For example we will start publishing famous linguist Hrachia Ajarian?s “Armenian Names Dictionary” of 5 volumes (third publication). It is a very famous dictionary dealing with the origin of the names and providing many biographies, explanations etc. The original volumes are expired. Our aim is to republish them on the occasion of 1600 anniversary of the invention of Armenian alphabet and the 130th anniversary of Ajarian?s birth. Gulbenkian Foundation would be funding it, ensuring a very reasonable retail price for the larger public.

We have another series of books called the Almanac of Teotig. The first issue of this almanac is ready. This will be published on the occasion of the Gulbenkian Foundation?s 50th anniversary. It will include blessing preface  by Catholicos Aram I. During the period 1907-1929, some 19 volumes of this work have been printed, making up the most famous almanac in our history. They contain various useful subjects. We photocopied all the pages and we cleared some of the unclear pages. Levon Sharoyan wrote an explanatory preface in 16 pages, describing the life and activities of Teotig and the significance of the book. The 8500 pages of this almanac was a major source for the Armenian Soviet Encyclopedia. The first volumes are less interesting as Teotig was new to this project. The 19 volumes are published in different places, reflecting the life of the author Teotig, starting from Constantinople, then Venice, Paris, Vienna, etc. We intend to work hardly on this project and to produce 3-4 issues every year. It could be read with great interest especially its last editions. We have given attention to the quality of the paper, which will give the impression of an old publication. The photos also are refined. We can consider 2006 as the year of Teotig. Another of his famous work is called Diboudar. An expired publication that contains the story of the Armenian publishers in four centuries, from 1512 when Hagop Meghabard published the first Armenian book until 1912, covering about 20 countries, 90 cities and the work of more than 400 Armenian publishers, mainly in Constantinople and generally all around the world. The servants of Guttenberg this is how he calls them. I have started a small introduction about the book. We are doing a really hard work, verifying the unclear parts.

What can you tell us about the current picture of the published Armenian book in the Middle East?
In Lebanon there are about 10 well-known Armenian publishing houses such as Hamazkayin, Catholicosate, Donigian, Shirak (the last two used to have many publications in the past, but they are selling their old publications now). There are other individual publishers such as “Karni“ serial (under the supervision of Varoujan Archbishop Hergelian), “Vosgetar“ has several publications (8-10 books). Under the Antelias (Catholicosate) Publishing House several funds have been established for publishing books. Hamazkayin has a great number of political and ideological books that are always available. There are others who publish different books such as Yervant Demirjian (who has series of illustrated books for children), Hagop Ladoyan and Sarita Kasbarian. In Iran Archbishop Sebouh Sarkissian had published several religious books. In Syria the most active ones are Cilicia and Arevelk. For two decades now the Catholicosate of Cilicia is organizing an Armenian book fair in Antelias. We participated in the last 2 years. There is a new renaissance in Constantinople involving some publishing houses such as Marmara (Robert Hadejian) and Araz (Mgrdich Margossian).

Starting from 1996 we paid attention to children publications. These works are very much popular now and have conquered all the Armenian households in the Middle East. The books contain internationally known heroes, speaking in Armenian language (in 24 volumes). We prepared also pre-school books (alphabets, fruits, etc, mostly bilingual works that are popular in the circles of the Armenians living outside the Middle East). These books made our publishing house famous in far places such as North America. One of the works that we intend to publish by the end of 2006 is an illustrated short stories for children by poet Hovhannes Toumanian. We secured new illustrations for this purpose. The material is published in the past in Constantinople and France, but Arthur Joumboushian (the well known Turkish-Armenian writer and poet Zareh Khrakhouni) has managed to transform the work from Eastern to Western Armenian in a sincere and interesting style. He is a noble Armenian poet at the age of 80 and has done the work with great joy.

Is there any crisis for the published Armenian book?
Our main problem is the distribution of the Armenian book. If a conference was to be organized for Diaspora publishers, distributors and bookstores the main topic should be how to distribute and spread the Armenian book after its publication and the methods of making it accessible to families. In this context the language plays an essential role. If the issue of the Mesrobian (traditional) dictation is solved, we will have lot of things to do in Armenia and Armenia will have lot of things to do in Diaspora. Thus, our children will be able to get rid of the Abeghian dictation (which is used in Armenia now) and read books by writers in Eastern Armenian language but with familiar dictation, meanwhile the children and residents of Armenia will have the Western Armenian writings understandable for them. The dictation barrier will be removed and the two parts of the Armenian nation will get closer. The present situation of the two dictations hinders the work of the publishers who avoid now publishing in sizeable numbers. The crisis is evident in the limited number of copies published for each book, a fact that does not justify the incurring expenses. This is combined with the other problem, namely the distributing of the Armenian book (which in some cases may take up to 8 years), a real problem in terms of storage. Arabic language children publications appear in 40 thousand copies while in the US this kind of books appear in hundred thousands copies.

LISTEN TO THE INVTERVIEW IN FOUR PARTS

– Can you describe in details the circumstances that lead into the establishment of the Cilicia (Giligia) Publishing House?

– How many volumes you managed to publish until today?

– What can you tell us about the current picture of the published Armenian book in the Middle East?

– Is there any crisis for the published Armenian book?