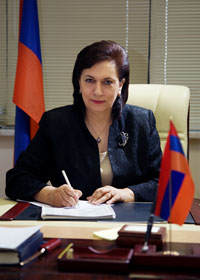 Hranush Hakobian: Body of All Armenians called National Council would be established in the near future

Minister of Diaspora Hranush Hakobian delivered a speech at the annual meeting of the heads of the Armenian diplomatic missions abroad on 02 September 2009.

Hakobian presented the work done by the Ministry and proposed some important programs to be implemented in cooperation with the embassies in the Diaspora communities.

From the viewpoint of developing the Armenia-Diaspora cooperation, she said that the term ?Armenian Diaspora? should be included in the Constitution. Other topics in her speech touched upon developing the legal basis for dual citizenship applicants.

Hakobian spoke about the projects related to the creation of a database of Diaspora Armenian communities and the studies dedicated to the history of these communities.

She briefed the diplomats on ?Ari Tun? (Come Home) program, which was established this year and envisaged regular visits of young Diaspora Armenians to Homeland.

She informed the diplomat about the popularity of the ?Hayern Aysor? (Armenians Today) website of the Ministry.

Hakobian also made special reference to the one-day Armenian schools and the necessity for increasing the quality of education there.

She urged the diplomats to establish ?Council of Friends? in each community, which will facilitate the work of the Ministry of Diaspora and the diplomatic missions as well.

She announced that a representative body of all the Armenians (National Council) would be established in the near future.