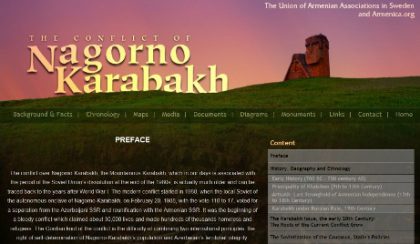 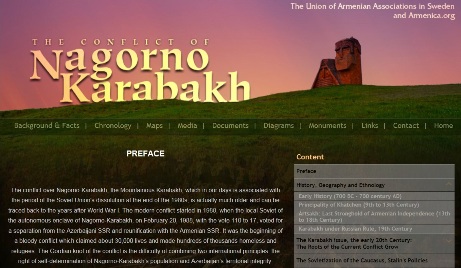 The conflict over Nagorno-Karabakh was a comparatively well-known event in the late 1980s and one can claim that it marked the beginning of the dissolution of the Soviet Union. However, today it is relatively forgotten to the outside world, which opens for disinformation and dissemination of propaganda, rather than facts and verifiable data.

Conflicts of this type are highly complex and the Karabakh conflict is no exception. It would be impossible to discuss the issue in a comprehensive manner in the limited space of this site. Mountainous-Karabakh.org will instead give a general description to the background, the historical roots, the events, the existing evidence and the present proposals for a peaceful solution that have been tabled during the negotiations. It is hoped that the reader will get a brief but accurate introduction to the conflict in order to dwell on the subject in case of deeper interest.

Mountainous-Karabakh.org is created and maintained by Armenica.org in collaboration with the Uninon of Armenian Associations in Sweden.
Armenica.org is a nonprofit project for spreading information about Armenia and its related issues.

The conflict over Nagorno-Karabakh, the Mountainous Karabakh, which in our days is associated with the period of the Soviet Union's dissolution at the end of the 1980s, is actually much older and can be traced back to the years after World War I. The modern conflict started in 1988, when the local Soviet of the autonomous enclave of Nagorno-Karabakh, on February 20, 1988, with the vote 110 to 17, voted for a separation from the Azerbaijani SSR and reunification with the Armenian SSR. It was the beginning of a bloody conflict which claimed about 30,000 lives and made hundreds of thousands homeless and refugees. The Gordian knot of the conflict is the difficulty of combining two international principles: the right of self-determination of Nagorno-Karabakh's population and Azerbaijan's territorial integrity. Notwithstanding, as the information in this site will show, these two principles do not need to be mutually exclusive.