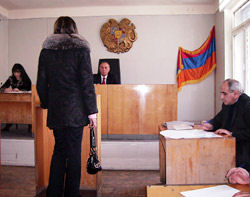 On January 31st a four-month criminal trial involving pimping and human trafficking came to an end in the Court of First Instance of Yerevan's Shengavit district.

In 2006 Mayranush Harutyunyan, Susanna Nikoghosyan, and Ruzanna Baghdasaryan were charged by prosecutors with violating the Article 261 of the Criminal Code of the Republic Armenia. Gayane Melkonyan was charged for violating the Articles 261 and 132, on human trafficking.

An alleged victim, Hasmik (all the names in this article are fictitious) told the court that in 2005 her acquaintance Knarik Danielyan offered her a high-paying job as a waitress in Dubai. ?Being in a dire state financially and having to take care of two young children, I agreed,? Hasmik recounted.

After some time, Knarik took Hasmik to Gayane Melkonyan's house. Melkonyan immediately called Irina Yenokyan in Dubai, and then told Hasmik that she should leave Gyumri for Yerevan the next day, and from there to Dubai. Knarik reassured the surprised Hasmik and told her that she had already informed Hasmik's mother that Hasmik had found a job in Yerevan.

As soon as Hasmik reached Dubai, Irina Yenokyan seized her passport and forced her into prostitution by repeatedly beating her. Hasmik was arrested by the police In December 2005 and deported in January 2006.

?I was living in very bad conditions, so I was looking for way to earn some money,? recounted Nazik, another victim. ?My mother wasn't working, and I was studying. My grandmother was paying my tuition, and sometimes my uncle would send money from Russia. Coming home from classes I ran into Anush Harutyunyan, an acquaintance of mine, and during our conversation I told her about my financial situation. Anush said that she knew a woman who could send me abroad to earn good money?.

Nazik went to see Gayane Melkonyan the same day. Gayane persuaded Nazik that she had connections in Turkey and could find a high-paying job for her. The next day Nazik again visited Gayane, who told her that her acquaintance Meline Gevorgyan would be arriving soon from Turkey, and then returning shortly thereafter, so Nazik could go with her.

Several days later Nazik traveled with Meline Gevorgyan to Turkey, expecting to work as a waitress there. Meline paid the travel costs. But there were several surprises awaiting Nazik in Turkey. Meline told her that her travel costs were $400, and that she was not going to work as a waitress, but as a prostitute, because that work was better paid there. Meline was working in the city of Ushadas under the supervision of a Kurd named Mujhdat. Mujhdat threatened the girls that if they didn't work he would sell them to pimps in Antalya or Istanbul.

?At first we were afraid, since we were in a foreign city and didn't know the language. Afterwards we agreed. After all, the debt had to be repaid. Even though my passport was with me and I could leave the hotel, I didn't run away. For three months I shared my earnings with Meline. After that, I lived for some time with my boyfriend, and then came back to Armenia,? Nazik told the court.

Nazik testified that she considered herself quits with the defendants, but at the same time she was a victim, because she had been tricked into going to Turkey on false pretences.

Several other witnesses told the court that they had gone to Turkey with the help of the defendants, specifically to engage in prostitution. But none of them had any issues with the defendants because they went on their own initiative and of their own free will in order to make money as prostitutes.

Oddly, both the victims and the witnesses refuted the section of their preliminary statements where they mentioned Susanna Nikoghosyan as being involved in the crime as their recruiter. Susanna Nikoghosyan was a defendant in two similar cases, which were subsequently merged, a month ago.

Larisa, another victim, told the court that she was in dire straits financially and that her only source of income was her daughter's allowance and occasional money from her brother who lived abroad. She added that in very tough times she would also work as a prostitute. Larisa told her neighbor Gayane Melkonyan about her tough situation, and through Gayane, left in 2004 for Trabzon to work as a hairdresser. In Trabzon she was met by Gohar from Ijevan.

?Gohar told me that I wouldn't be able to make good money working as a hairdresser there and that in order to pay the travel debt back quickly I would have to work as a prostitute. I refused but they took away my passport and forced me out on the street. I worked for six months and gave all the money to Gohar. Only once did I send $100 back home. Later on, it was either May or June, they sold me for about $2,000 to another pimp called Ferman,? Larisa recounted. In the end the victim said that she had no complaint against Gayane Melkonyan as she hadn't tricked her and promised her a job.

In court, all the defendants with the exception of Gayane Melkonyan pled guilty and requested a lenient sentence. Judge Surik Kostanyan denied the request of Gayane Melkonyan's attorney Gurgen Grigoryan request to move the case back to the preliminary phase, and found Gayane Melkonyan guilty of violating two articles of the criminal code, sentencing her to five years in prison. Susana Hakobyan was sentenced to two years, and Mayranush Harutyunyan and Ruzanna Baghdasaryan each received one year of probation.