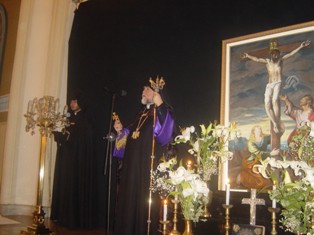 His Holiness Aram I presided over the Sunrise service held at the St. Neshan Mother Church in Beirut on the median day of Lent following an invitation from Bishop Kegham Khatcherian, Primate of the Diocese of Lebanon, and the Armenian National Council.

The median day of Lent is the 24th day of Lent and it occurs on the Wednesday of the fourth week. Although it does not have any specific religious significance, this mid-point day has been traditionally marked as a special occasion. It often features gatherings of fellowship and friendship and the sharing of a Lenten meal.

His Holiness was accompanied by members of the Cilician Brotherhood and a large number of Seminary students and believers filled up the church. Since the establishment of the Catholicosate of Cilicia in Antelias in 1930, it has become a tradition for the Pontiff to attend the Sunrise service during the median day of Lent in the St. Neshan Mother Church.

Speaking after the service, Bishop Khatcherian welcomed the Catholicos in his traditional visit to the church and stressed the importance of ties between a Spiritual Leader and his believers like a shepherd and his flock, as one of the foundations of a healthy and strong church.

His Holiness Aram I praised the Primate, the National Council and all the bodies in the Diocese for their active and healthy contribution to the life of the Armenian Church. He based his Sermon on the concept of following Jesus Christ, focusing mainly on three notions: recognition, confess and participation.

The Catholicos stressed the importance of knowing Christ and his teachings in order to be able to follow him. Logic is the greatest wealth of human beings and it leads them to understanding and recognition, as well as a conscious faith in God.

The Pontiff then pointed out that being a Christian does not mean only knowing and reading the Holy Bible. A non-Christian can also do this. What differentiates Christians is that they live the teachings of the Bible in their daily lives.

His Holiness also emphasized on the need for participation in the Church life. He said God speaks to each nation through their culture. As such, Armenians have come to know God through their cultural values as a nation. He called on Armenian believers to steer away from foreign influences. Armenians should thus approach Christ and take part in his mission through the Armenian Church. Therefore, being Armenian Christian means participating in the life of the Armenian Church and its mission through its rituals and cultural traditions.

The Church?s Board of Trustees and its Ladies? Guild had organized a reception in the Prelacy in honor of His Holiness. Seminary students, former minister Souren Khanamirian as well as friends of the St. Neshan Mother Church were also present.

Newer PostWhy do we invite them in the first place?
Older PostPimp sentenced to five years in prison