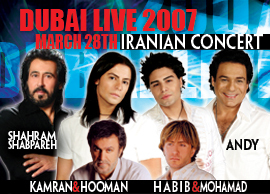 About 200.000 Iranians living in the United Arab Emirates and others who will be traveling from Iran during the Norooz (Iranian New Year) celebrations, will enjoy 3 live concerts in Dubai, performed by well-known Iranian artists.

These specific events will take place on 26, 27 and 28 March 2007 according to the following schedule:

Azad-Hye contacted Vachik from the organizing company (Concerto Production Corp.) who provided us with brief information about each of the performing stars:

EBI, SEPIDEH and DJ ALIGATOR (26 March 2007)
Ebi is considered as a legend super star, Sepideh is an up and coming female singer and D.J. Aligator is a persian favorite from Denmark.

SHAHRAM SOLATI, SHOHREH, SIAVASH GHOMEISHI, SHAHYAD and MICHAEL (27 March 2007)
Shahram and Shohreh are brother and sisters who started their career from Iran from mid 1970's and still going strong. Siavash used to be a song writer for the big stars, now he is a big singer star himself. Shahyad is a young new talent and Michael is a very talented Armenian act who makes great impressions of all the Persian singers. His comedy singing act has a lot of fans all around the world.

SHAHRAM SHABPAREH, KAMRAN & HOOMAN, HABIB & MOHAMAD and ANDY (28 March 2007)
Shahram Shabpareh is one of the oldest Persian pop stars who's upbeat music still attracts a lot of fans. Brothers Kamran and Hooman right now are the hottest act around. They mix Persian and hip-hop feels with an extensive choreography. Habib and Mohammad are father and son who have lots of fans in the middle east. Habib is a well known star from the old days in Iran in mid 70's with big hits. After many years he has surfaced again bringing his young and talented son in to the act. Andy is a well known Armenian Persian star who has been in business for more than 30 years and still going very strong.

Andy (Andranik) Madadian: Born in 1956, Andy is better known by his stage name Andy. He is probably the most famous and successful Iranian pop singer. Seen by many as an icon and a legend in pop music Andy has had more hits than any other pop artist in Persian music history. His albums have always been best-sellers and he has sold out arenas for nearly two decades.
He started his career in the early 1980s and made it big when he joined Kouros and together formed a successful duo. Together they released 4 very successful albums and became one of the most famous pop singers at the time. In 1992 Andy and Kouros split and both went to pursue solo careers.

He has been awarded Best Armenian International Singer of the year four times and in 1994 Universal Studios declared Andy the best Iranian singer of the decade. Andy has released fifteen music albums since the start of his career including “And My Heart…” in which he sings five tracks in Persian, two in Armenian, two in Spanish, two in English, one in Arabic, and one in Hindi. His music is currently banned by the government in Iran, but bootleg versions of his albums are widely available.