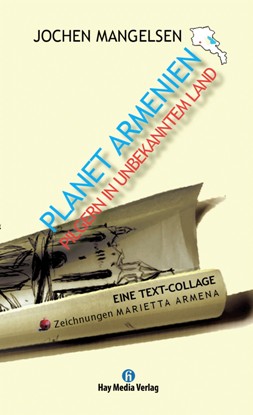 A presentation of the book “Planet Armenia: Pilgrimage to an unknown land” by Dr. Jochen Mangelsen took place on 26 November 2011 at the Armenian Cultural Union in Hamburg.

The book was released in Frankfurt in September 2011 by the ?Armenian Media? publishing house and has 187 pages. It is enriched with brilliant illustrations made by the Bremen-based Armenian painter Marietta Armena.

The book is a result of a several-week journey during which the author moved from region to region, from monastery to monastery and through spiritual adventures all around Armenia and Artsakh (Karabakh).  The South Caucasus politically risky and uncertain conflict concerned him as much as the country?s fantastic legends, history of millenniums, people and culture. The book includes text miniatures – short novels, which, despite being only a few lines, reflect the unique magic of the country. Its second edition is expected early next year.

Mangelsen, born in 1942, is a journalist who lives and works in Bremen. For many years he has worked as a spokesman for the Bremen Radio. He began his journalistic career after studying oration, drama studies, German language and philology. He is married to Seda Murdayan. Their daughter, Sona, got married in 2011 at the historical Church of Saint Hripsime in Etchmiadzin (Armenia) under the Armenian religious rite. According to Mangelsen, the roots that his wife Seda has instilled in her daughter?s soul have deep foundations.

The motivation that has brought Mangelsen to the topic “Armenia” over forty years stems from his own German history. The holocaust committed against the Jews by the generation of his parents makes him sensitive towards the Armenian Genocide. Mangelsen has created a German Armenian circle in Bremen and has worked as co-editor or the “Armenian-German Correspondence” magazine. Currently he is the media consultant to the Central Council of the Armenians in Germany (Zentralrat der Armenier in Deutschland).

To the question “what charms you in Armenia?” Mangelsen says: “We fall in love with a place, its nature and people and at one time we go to discover it and that journey may well take us to our souls”.

Mangelsen has been enchanted with Armenia for about 40 years. For him Armenia and Artsakh (Karabakh) are miraculous places full of legends, thousand-year-old cultural monuments, deep religious experience, mythology and the difficulties of the modern history.

He is the author of a novel called “Ofelya?s long journey to Berlin”, published in 2001. The book raises the issue of the Armenian Genocide (1915 ? 1919), during which 1, 5 million Armenians were sent to death. The novel describes the fate of many Armenian families who live abroad but are unable to forget the horrific events of the past and feel abandoned and forgotten by the world.

In 2006 Mangelsen shifted from fiction to travel literature. He published a book with Alexander Schmitt about a pilgrimage to Spain. In 2010 the expectations of his fans were satisfied when he traveled to Armenia and Artsakh and summed up his vivid impressions in a book sealed with a pilgrim?s unique confession of love to Armenia and the Armenians.

The above information were taken from a press release issued by the Central Council of the Armenians in Germany (Zentralrat der Armenier in Deutschland) written by Ofelya Sargsyan, from Flensburg, Germany. Adjusted by Azad-Hye.