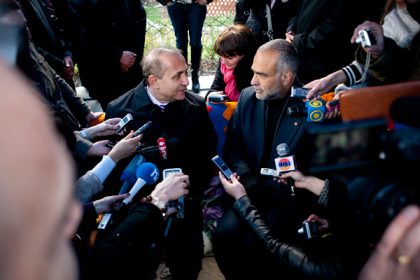 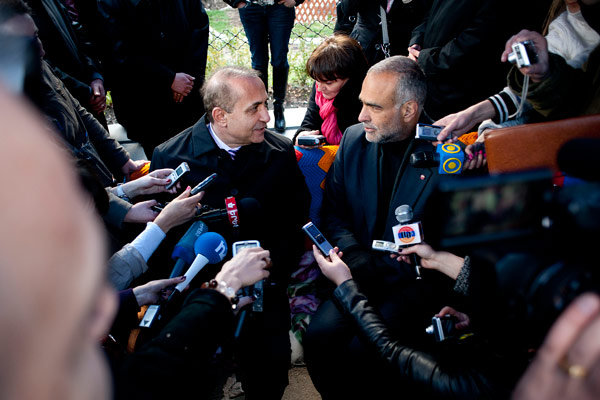 Speaker urged the Heritage party leader to end his protest fast, which is in its 10th day.

Arriving around 4:15 p.m. (25 March 2011) at Liberty Square, where Hovannisian has been staging his strike since March 15, Hovik Abrahamyan spoke with Hovannisian for about 20 minutes, sitting together on the park bench that has become the gathering point for thousands of supporters (a few at a time) since the strike began.

Speaking with media later at the scene, the Parliament Speaker said he told Hovannisian: ?I agree that we have many problems in different spheres but the parliament rostrum is the best place to raise those questions and together find solutions.?

During their conversation several times Abrahamyan asked to stop the ?Freedom Fast?.

Earlier in the day Hovannisian had said that he would consider ending his strike, depending on what ?authorities might say? when they spoke to him.

After the meeting Hovannisian said that he is ?very touched? by the Speaker's visit, but that the fast will continue.

In an unexpected development, police have allowed Hovannisian to keep the tent supporters erected for him yesterday, where Hovannisian was said to have enjoyed a good night's rest. Hovannisian, taking only water, has been weakened over the days, but his doctor says his vital signs are normal.

His wife Armenuhi told ArmeniaNow that when she thanked police on the scene for allowing the tent, one of the officers told her: ?He is an honest man, we love him, too.?

Will ?torment? his family, supporters for a little more

Authorities have conceded to allow hunger striker Raffi Hovannisian a modicum of comfort as cold and rain visited on the eighth day of the opposition leader?s demonstration in Liberty Square.

As rain continued Wednesday morning, Hovannisian sat next to a gas heater and under a canopy that had been torn down by police on Sunday, in a skirmish with Parliament Members from Hovannisian?s Heritage party (see Altercation: Heritage deputies resist police tearing down umbrella)

Police say he may keep the canopy raised during the night, and when there is rain. Hovannisian express gratitude to Police Chief Alik Sargsyan for allowing the cover and heater, but also hopes authorities will consider Ombudsman Karen Andreasyan?s advice that, as a matter of human rights, Hovannisian should be allowed a tent.

Tuesday late afternoon saw an unusual scene in the square, as Heritage MPs gathered in the drizzling rain around Hovannisian and delivered a report to Parliament, online.

Head of the Heritage parliamentary faction Stepan Safaryan, hitting back at those who have criticized Heritage and its leader for conducting the action of protest said ?today is not time for finding justifications, but it?s time for building bridges between society and its parts that wage struggle; a time to act immediately through dignified partnership?.

Safaryan?s comments referred to Armenian National Congress leader Levon Ter-Petrosyan?s explanation as to why he did not approach or greet Hovannisian, who was on hunger strike during the opposition?s March 17 rally. Ter-Petrosyan, in particular, said, it ?contradicted? to his ?principles of Christianity.?

Meanwhile, speaking in parliament on Tuesday, Armenian Revolutionary Federation faction leader Vahan Hovhannisyan shamed the authorities and representatives of the radical opposition for their uncompromising stance on Hovannisian?s action.

?The miserable publications against Raffi Hovannisian in the radical opposition press are disgusting? said Vahan Hovhannisyan, who had also encouraged authorities to allow the canopy.

Wednesday morning Hovannisian joked that: ?Of all the things I thought might be a result of this (hunger strike), sparking a theological debate was not one of them.?

As the second week of his ?Freedom Fast? has begun, Hovannisian said his family, fellow party members and ordinary citizens suffered more than him because of his ?unordinary? action that he said was sometimes needed. His son, Garin, whose book on his family ?Family of Shadows? has become a popular read among Diaspora since its winter release, spends nights on the bench keeping watch while his father sleeps.

The man who has gone without food and elementary conveniences for more than a week to get his political message across, said: ?I?ll torment you for a little more, I don?t know for how long, but this is our way.?

Below photo: Raffi Hovannisian with his wife Armenuhi. 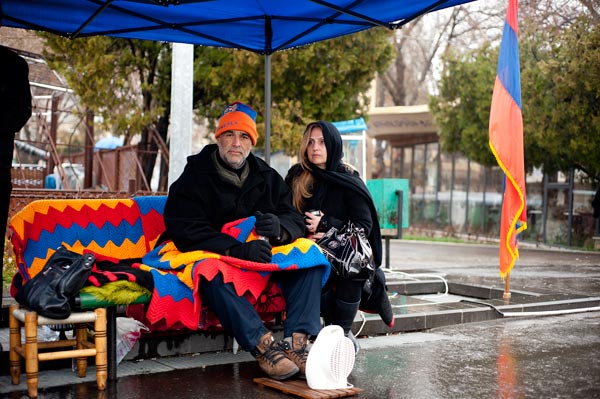