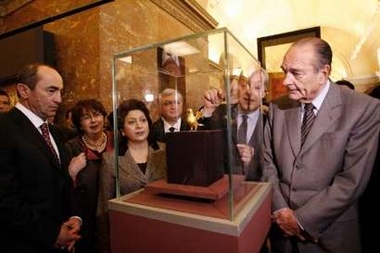 Presidents Jacques Chirac and? Robert Kocharian inaugurated exposition “Saint Armenia” (Armenia Sacra) dedicated to the Armenian Christian culture (from the 4-18th centuries), which is being exhibited in the Louvres for the first time.
?
The two Presidents made a tour of the exposition and examined some 200 pieces dislayed there.
?
Chirac was accompanied by Renaud Donnedieu de Vabres, Minister of Culture.
?
Chirac had the opportunity to admire some 30 Khachkar pieces, the oldest one dating to the 9th century. The guests had a long stop in front of a piece taught to be part of the Noah's Ark, discovered in the 17th century on the top of Mount Ararat.??
?
“Armenia Sacra” will be open to the public from 21 February to 21 May 2007, as part of the “Year of Armenia in France” activities.
?
Sources: Jean Eckian and Yerkir online.
Photos: Jean Eckian
?

ADDITIONAL READING
?
President Robert Kocharian is in Paris on a four-day official visit. He already met with President of France Jacques Chirac. Kocharian is scheduled to meet also Prime Minister Dominique de Villepin, Senate Chairman Christian Ponsley and Speaker of the National Assembly Jean-Louis Debre. Robert Kocharian and First Lady Bela Kocharian attended on 17 February 2007 the “Charles Aznavour and friends” concert at Garnier Opera of Paris.
?
Mrs. Bela Kocharian will attend also the exhibition of Hovhannes Ayvazovski and the “12 Armenian capitals” exhibition. On Monday the 19th, in Louvres Museum Presidents of Armenia and France will be present at the opening of the “Sacred Armenia” exhibition (see above report).
?
In Paris Kocharian will meet with representatives of the Armenian community. The delegation headed by Robert Kocharian will leave for Nice, where he will attend the ceremony of the opening of the Armenian Alley and will have meetings with the city leadership.
?
Compiled by Sylvia Bourdjian
?