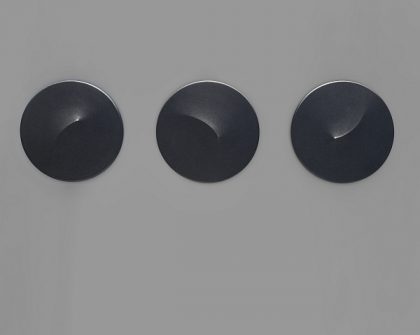 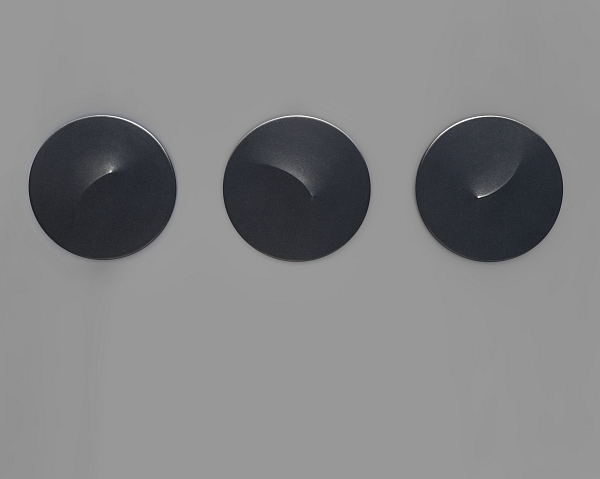 Granite─ a dense igneous and compact stone, embedded in history as a heavy, solid and dominating mass. So the Ancientʼs Egyptians saw in its power to condemn the living and the dead, whether they be slaves hauling great quantities for the construction of impressive monuments, or the newly deceased entombed forever in the sarcophagus.The very mention of the material constitutes weight in itself.

This is not so in the works of Armenian-Egyptian artist Armen Agop. Selma Feriani Gallery is delighted to introduce Sculptures, his first solo exhibition at the gallery. Sculptures contains an array of his most recent pieces, all handcrafted in black granite.The exhibition is a meeting of congruency and contradiction; the works are one shape, one material, one colour, but exhibit dissimilar and unique characters. It is about observing the unseen, playing upon the notion of something being other than what it first appears to be.

His art emulates a quiet, stillness that seems to float in the space.Even with their sheer volume the artist seems to avoid their true nature and transforms them into constellations that coordinate a cosmic area. Forms vary from discs with subtle indentations to larger cone-like structures; smooth surfaces produced through a timeless skill are juxtaposed with harsher angles. Brought together by ancient techniques from masonry skills long forgotten, Agop seeks to revive the lost in the production of the found. Hints of movements such as a drop of water in a pool or catch of a wave signify to the viewer apathy for, and depictions of, a moment, caught in an obscure fragment of time, an act not often seen to the naked eye. Possible questions of origins are posed; the balance of action and deed coupled with notions of understanding and reasoning. Unlike John Crary, who states in Techniques of the Observer, that on comprehending the observer as one who sees, they are more importantly ʻone who sees within a prescribed set of possibilities,one is embedded in a system of conventions and limitations.ʼ The artist denies access to such beliefs in order to revive the mind.

Agop begins with the circle since,─ even in his youth ─ he saw the circle as a ʻsphere.ʼ The process of shaping constitutes a circular motion, in cutting, sanding and smoothing. The task in itself becomes a repetitive act; monotonic steps of rhythm through making, creating a steady pulsating meditative force which reverberates in each sculpture and corresponds to one another in sync, in coalition with a Sufi-like relationship to the outside world. Like Serraʼs great courses, they involve a motoric exploration through walking around them providing new and open force fields. ʻItʼs all about uniting yourself in order to unite with the world,ʼ the artist explains,the works are of a compact character, encompassing an internal center of gravity, a sense of oneness that rejects external forces. Nothing.An absence of something. Armen evokes the language of the desertʻwhere he learned to see.ʼ Like lines in the sand dunes they guide and direct to the horizon.

Newer PostHasmik Verdyan: Once in a while we should tell people that there are such things!
Older PostParochial visit to Rahva, Gyardabad and Urmia in North-West Iran