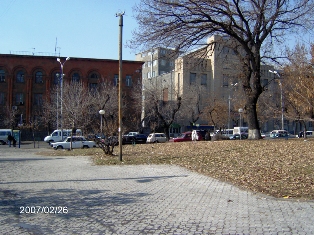 The Assyrian International Seyfo Committee (AISC) has sent letters of appreciation to Armenian authorities for their support of the just case of the Assyrian Genocide recognition.

The letters came in response to the Municipality of Yerevan decision in 2008 to allocate a piece of land to the Assyrian community in Armenia for building a monument commemorating the Assyrian Genocide in 1915.

The first letter is addressed to the President of Armenia Serzh Sargysian, in which the Sefyo Committee thanks for his support and help to the Assyrians in Armenia for erecting the monument.

The second letter is addressed to the Mayor of Yerevan Gagik Beglaryan, where the Mayor is commended for the decision for allocating the land. The Seyfo Committee urgs the Mayer for continuous support and expresses the wish to visit Yerevan for the inauguration of the monument.

See below the text of the letter to the President Sargsyan

On 12 November 2008 the mayor of Yerevan signed the decision (№ 5261) on allocation of 16 sq. meters to the Assyrian Association of Armenia ‌‌(Atour) for the erection of a monument commemorating the victims of the Armenian and the Assyrian genocides between years 1915-1923 in Ottoman empire.

On 05 February 2010, the mayor of Yerevan signed the decision (№ 01150-26847-13) authorizing the Assyrian Association of Armenia (Atour) to begin the erection of a monument for the innocent victims of the genocide of the Armenian and Assyrian peoples (1915-1923) in the Ottoman Empire.

The Assyrian International Seyfo Committee hereby thanks your country for the support and help to the Assyrians of Armenia. We believe the Armenian and Assyrian people have much in common and share a deep friendship.

A memorial monument in Armenia for the Assyrian 'Seyfo Genocide'