The Singapore community warmly embraced the Armenian National Olympic Team at the first-ever Youth Olympic Games, held in Singapore from 14 to 26 August 2010. The Armenian team experienced the amazing wonders of Singapore and strengthened Armenian positive contributions to Singapore.

The Armenian delegation and the Singapore-Armenian Development Council give their warmest appreciation to all those who contributed to make this event such a wonderful success, including the International Olympic Committee, as well as the Singapore Youth Olympic Games Organising Committee, Singapore Ministry of Foreign Affairs, Singapore?s National Heritage Board, and National Parks Singapore. The Council also thanks those foreign embassies that expressed support including the United States, the People?s Republic of China, the Republic of India, the United Arab Emirates, and the Republic of Armenia.

A spokesperson for the Council congratulated all members of the Armenian team and offered them the Council?s assistance in strengthening their positive contributions to Singapore. Pierre Hennes, a member of the Council, said ?Singapore welcomed the Armenian delegation with open arms, making them feel like family, and showed them the many reasons for the amazing Singapore success.?

?The Council is committed to assisting Armenians worldwide to contribute to Singapore on a scale that would make our ancestors proud. The Council has three-year goals for Armenians? contributions to Singapore and expects to meet or exceed those KPIs,? commented Paul B. Kazarian, Chairman of the Charles & Agnes Kazarian Foundation, a founding member of the Council.

The Singapore-Armenian Development Council organized several events with the goal of having the Armenians experience the amazing wonders of Singapore and strengthen Armenian positive contributions to Singapore. The Armenians visited a number of landmarks representing the positive Armenian historical contributions to Singapore, including Armenian Street, a main street in Central Singapore; the Straits Times, Singapore?s national daily newspaper, founded by Armenians; and, the Singapore Botanic Gardens, where they viewed the Singapore national flower, Vanda Miss Joaquim, named after its Armenian founder Agnes Joaquim. The Team also visited the Armenian Apostolic Church of St Gregory the Illuminator, the oldest Christian church in Singapore. Built in 1835, the Church will be host to a series of events to be held in March 2011 in celebration of its 175th
Anniversary.

For more information on the anniversary celebrations, visit:
www.armeniansinasia.org/175-years/.

To strengthen Armenian positive contributions to Singapore, the Singapore-Armenian Development Council organized visits to the Lee Kuan Yew School of Public Policy at the National School of Singapore, the Singapore Science Park, and Singapore Management University, as well as meetings with global entrepreneurs and business leaders interested in expanding trade relations with Armenia and its Diaspora.

Under the auspices of the Games, the Mayflower Secondary School in Singapore organized an Armenian cultural week and the medal winning athletes visited the school and students. Also, the Council organized an impressive community dinner reception honoring the Armenian Olympic delegation.

To view related pictures and videos of the events, or to learn more about Armenian communities in Asia, visit: www.armeniansinasia.org

About Singapore-Armenian Development Council: The Council was established in 2009 to strengthen the Armenian community in Singapore and promote commerce between Singapore, the Republic of Armenia, and the Armenian Diaspora through initiatives that inspire creativity and innovation in these communities. The Council is committed to assisting Armenians worldwide to contribute to Singapore on a scale that exceeds top global benchmarks. The Council has three-year goals for Armenians? contributions to Singapore and measures its success through several key performance indicators.

Note: We thank the Embassy of Armenia in Abu Dhabi for inviting our attention to this event. 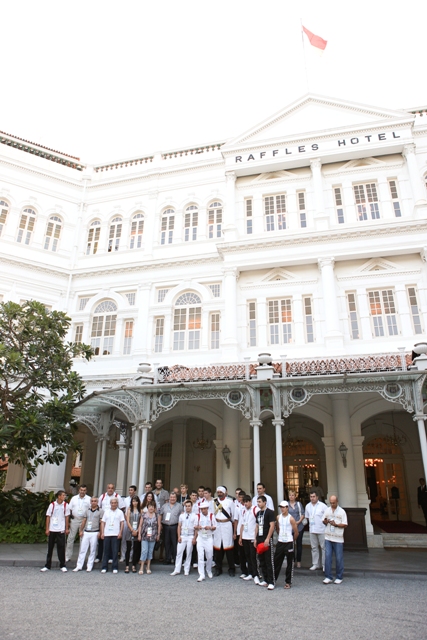