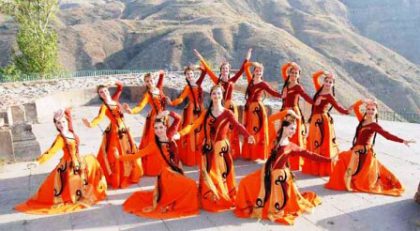 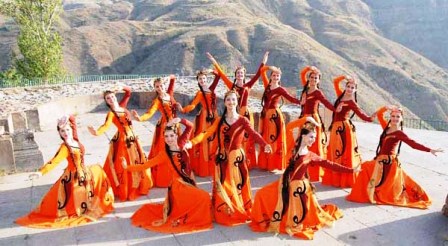 The Armenian National Song and Dance Ensemble, Tatoul Altounian, dazzled a crowd of over 1,000 at the Cairo Opera House this week with infectious rhythms, skillful choreography, and sharp execution, putting on an impressive display of this small country?s intriguing cultural heritage.

The concert, which was held as part of a series of ?Armenian cultural days in Egypt? last Sunday, was jointly organized by the Egyptian Ministry of Culture and the Armenian Embassy in Egypt as part of a larger bilateral initiative to foster cultural exchange between Egypt and Armenia.

?We are trying to show the Armenian culture and traditions because the best way to make other people know you is to show and share your culture,? said Smbat Khachaturian, assistant to the Armenian ambassador in Egypt.

The series included a photo exhibit on Armenian architecture in addition to three performances from Tatoul Altounian, first in Cairo and thereafter at Damanhour?s newly-restored Opera House, and the Sayed Darwish Opera House in Alexandria.

As part of this initiative, a series of Egyptian cultural events are scheduled to be held in Armenia in 2011.

Tatoul Altounian?s performance alternated between rousing and subdued. The male dance troupe blazed their way around the stage like an Eastern European rendition of Riverdance, legs flailing at feverish speeds. Act after act, audience members sat transfixed as dancers made acrobatic leaps around stage, vaulting and spinning in mid-air. The female troupe?s dancing was slower and more graceful, with ballet-style movements.

The event?s instrumentation was uniquely Armenian, featuring instruments such as duduk (a flute carved from apricot wood), qanun (a trapezoid-shaped zither) parkapzuk (an instrument bearing some resemblance to a bagpipe), zuma (a cone-shaped oboe), dahol (a cylindrical drum), kamancha (a stringed instrument with a sound reminiscent of a cello), and oud, which is also used in traditional Armenian music.

The troupe?s frequently-changed costumes ? characterized by lavish, tactile fabrics and startlingly bright colors ? added visual flourish. Female dancers wore long dresses in various bold colors and patterns, plus a pair of braids dangling past their hips topped with a kind of topless pillbox hat, sometimes draped with a gauzy train and other times resembling a crown.

In another context, the garb could have appeared over-the-top, but it was well-placed in this remarkably vibrant performance, complementing the evening?s imaginative dancing and intriguing melodies.

The ensemble?s repertoire was developed in the 1930s by its founder and namesake, Tatoul Altounian. Altounian traveled around Armenia collecting national songs and dances from various regions, arranging them to be showcased by his group.

Besides presenting a spectacular music and dance performance, the concert drew attention to the long and rich history of Egypt?s Armenian diaspora.

Concentrated in Cairo and Alexandria, the Armenian presence in Egypt dates back to the Fatimid era and continued through the Mamluk period to the early 20th century, when numbers increased sharply as many fled the Armenian genocide. According to the Armenian Embassy in Egypt, Egypt?s Armenian population reached its peak in the 1940s, when it numbered over 40,000.

The community has since dwindled to about 8,000 as a result of migration to the US, Canada and Australia following Nasser?s economic reforms and nationalization in the 1950s.

Newer PostLand and Culture Organization: Helping out the home country
Older PostTurkey treads cautiously on question of Armenian past