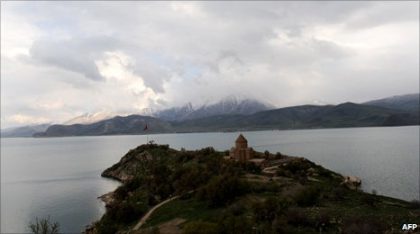 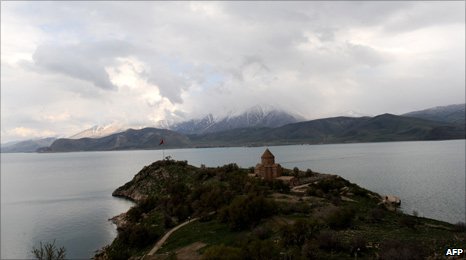 The Turkish government wants to improve relations with Armenia, but is it ready to leave behind decades of nationalist dogma and fully confront the country's past?

From the vantage point of the ancient castle, perched atop a rocky outcrop, you can see the whole of the city of Van, spread out between the dazzling blue of the great lake and the jagged mountains to the east.

It is a featureless sprawl of ugly apartment blocks that you might find in any provincial Turkish city. Nothing suggests that it has any history going back more than a few decades.

If you then look to the south, directly beneath you is an area of rough grass, criss-crossed by a maze of paths, with just a few fragments of buildings still visible.

This is Old Van, a city that, until its destruction, had been continuously inhabited for more than 3,000 years.

And a large part of the people who inhabited it were Armenians – it had once been at the heart of a great Armenian empire.

Today there are almost none.

The only two buildings still standing there are mosques. Of the dozen or so churches, there is no trace.

The story of how the Armenians vanished from their historic homeland is not discussed in Van today.

The city proudly describes the waves of invaders who have passed through – Parthians, Greeks, Romans, Persians, Seljuk Turks – but the Armenians who dominated the city just a century ago are hardly mentioned.

This is not surprising really, when you consider that the Ottoman Empire's biggest minority was driven out of Anatolia in 1915 on ghastly death marches.

At least half, maybe much more, of the original population died, in what many historians call the modern world's first genocide.

Today the inhabitants of Van are mainly Kurdish, some probably the descendants of those who killed and seized the property of the Armenians.

The current Turkish government is the first one to seek some kind of accommodation with its Armenian past.

It needs to if it is to fulfil its ambition to be a regional power and to be part of the European Union.

That is why it permitted a Christian service to take place last Sunday in the beautiful little church on Akhtamar Island in Lake Van.

It is the only historic Armenian building still standing in eastern Anatolia, and among the most holy for Armenian Christians.

I happened to be in a bus with an Armenian choir from Istanbul who had been invited to sing at the service.

They were being treated as VIPs – the municipal government wanted them to feel welcome – and we were being given a tour.

Our guide was a young local woman called Fatima. She had won over her guests by singing some lovely renditions of old Armenian ballads.

But when she pointed out the wasteland that is the old city today, all she could say was that the Armenians had, in her words, “disappeared”.

For a few moments the bus went quiet then everyone broke into song again.

None of the Istanbul Armenians wanted to talk about the past. They are a very small community, acutely aware of their vulnerability.

The Armenians who had come from the United States for the service were more forthright.

“It's bittersweet, coming here,” said one man whose grandparents had fled from Van during the killings.

“We're like parallel cultures, we even look the same,” he said, “only we hate each other.”

He said there had been strong pressure on him from other American Armenians not to come – they saw the one-off church service as a cynical publicity stunt by Turkey.

At times on Sunday it did seem like that.

The local government had invited an army of journalists to witness the service who threatened to overwhelm the congregation. It also invited local Muslims, who talked and laughed all the way through it.

No-one made any effort to respect the sanctity of the ceremony.

A local boatman told me he was puzzled by the way they were praying. He had never seen a Christian service before. “And why are they crying,” he asked? He had no idea.

The Turkish government still fiercely defends its version of history – that what happened in 1915 was a tragedy, not a war crime.

In Van, it points out, the Armenians took up arms. For a while they controlled the city and later they helped enemy Russian forces to occupy it.

In the chaos of war, it says, large numbers of Turkish Muslims also died.

But the annihilation of the Armenians is simply blanked out of the history taught in Turkish schools.

There is no discussion, and real dangers await those who try to start one.

It is less than four years since the Armenian journalist Hrant Dink was murdered in Istanbul by a young nationalist for calling for just such a debate.

“This church service is pointless if the Turkish government only wants to appear more tolerant,” one Armenian journalist told me.

“It has to change the mindset of the people. Make them confront their past.”

In the dreary avenues of modern-day Van, that process has not started yet. Its history is still buried under layers of concrete and by Turkey's uncompromising nationalist dogma.

Photo: The church on Akhtamar island is the only Armenian building still standing in eastern Anatolia (AFP)