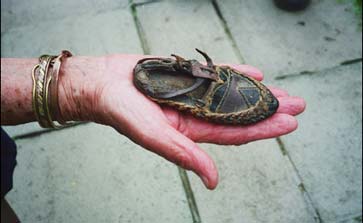 Her ultimate goal is to establish a permanent research centre in devoted to victims of expulsion and is meant to give a taste of things to come at the “Centre against Expulsions” (“Zentrum gegen Vertreibungen”). The exhibition will take place in (Kronprinzenpalais) from 10 August till 29 October 2006, occupying a space of 600 square meters.

In addition to focusing on dispossessed Germans, it documents the plight of Poles and Jews deported by the Nazis, Armenians slaughtered by Ottoman Turks, Greeks and Turks displaced by the conflict in Cyprus, and Muslims and Croats persecuted by Serbs in Bosnia and Herzegovina. It is designed to offer an overview of the phenomenon of expulsion in 20th century .

The organizers succeeded in recalling chapters in European history of which until now only experts were aware.

In the “Frankfurter Allgemeine Zeitung”, Regina M?nch says “From the massacres of Armenians in the Ottoman Empire through the ethnic cleansing in in the 1990s, nine cases are chosen to represent the expulsion of millions of people in “. The cases are exhibited in the “Europe Room”.

For further information about the organizer?s activities, please visit their

Following is a briefing about the Foundation, its main tasks and the endowment of the Franz Werfel Human Rights Award since 2003.

Our foundation is in existence since 6 September 2000. It was born in the awareness of the German League of Expellees, that it is necessary not to remain trapped by one's own suffering, in personal, traumatic memories: rather, it is necessary to create an instrument which contributes to the fundamental outlawing of displacement and genocide as a political tool.

It was for this reason that an independent foundation was established. Its objective is to counteract displacements and expulsions of peoples all over the world, to outlaw and to prevent them and thus to create understanding among nations, reconciliation and the peaceful neighbourliness of peoples.

The foundation has its headquarters in and has been recognized as being of public benefit.

The foundation ZENTRUM GEGEN VERTREIBUNGEN (Centre against Expulsions) was founded in the spirit of reconciliation with all neighbouring peoples. It declares its solidarity with all victims of expulsion and genocide.

The foundation has four equal-ranking tasks, human rights always being central to them:

In an overview in Berlin, the fate of more than 15 million German victims of deportation and expulsion from all over central, eastern and south-eastern Europe with their culture and their history of settlement is to be made accessible, as is the fate of the 4 million German late repatriates who have been coming to the Federal Republic of Germany or came to the former GDR since the 1950's, above all since the end of the 1980's. These expelled and deported persons had their homes in the whole of central, eastern and south-eastern , where they had settled for centuries.

We wish to illuminate the changes in as a result of the integration of millions of uprooted compatriots, and this integration has had its effects on all areas of life. There were seven or eight hundred years of independent cultural identity and experience in living alongside and with one another with Slav, Magyar, Baltic or Romanian neighbours. The German expellees brought their intercultural competence here with them. With their early profession of loyalty to a Europe in which peoples live in peace with one another, they were way ahead of most people in . Why? They know more intensively than others that Europe does not end at the Oder and or the .

Expulsion and genocide of other peoples, especially in , are an indispensable part of the ZENTRUM GEGEN VERTREIBUNGEN. In Europe alone, more than 30 ethnic groups are or have been affected by such breaches of human rights ? The community of nations indolently turned a blind eye to the genocide of the Armenian people in 1915/16 by the . Ethnic “land consolidation” by enforced resettlements were not only tolerated, but also adopted by the in 1922, and Hitler included the lack of interest of the community of nations in his calculations for his terrible plans of destruction. “Who now talks about the destruction of the Armenians?” he said in 1939, continuing step by step cruel acts against our Jewish fellow-citizens and European Jews. He opened Pandora's box wide. This meant that there was no stopping it after him. All the victims of genocide and displacement need a place in our hearts and in historical memory. The ZENTRUM GEGEN VERTREIBUNGEN wishes to provide such a place. We wish to make clear that human rights are indivisible. Dialogue with our neighbouring peoples is an indispensable part of this.

Awarding a prize to people who sharpen the sense of responsibility through their actions is one of the foundation's tasks. The prize may be awarded to individuals as well as to initiatives or groups who have turned against the breaching of human rights by genocide, displacement and the deliberate destruction of national, ethnic or religious groups.

With the endowment of the Franz Werfel Human Rights Award, the ZENTRUM GEGEN VERTREIBUNGEN is implementing one of the tasks anchored in its statutes.

The award is named after the great author Franz Werfel (1890-1945), whose novel “The 40 days of Musa Dagh” forcefully, effectively and with great artistic power portrayed the displacement of the Armenians from and the genocide of the Armenians in 1915/16. The great German, Bohemian, Jewish lyricist and novelist Franz Werfel was also a telling example of the fate of displacement in his personal life. In 1933, he was excluded from the Prussian Poets' Academy by the National Socialists. In 1938, he had to flee to , from where he only escaped from the following German troops in an adventurous flight across the . In 1940, he left to the , where he lived in until his death in 1945.

Franz Werfel's heiress, Marina Mahler, permitted the use of the name by the ZENTRUM GEGEN VERTREIBUNGEN in a letter of 17.1.2002.

The Franz-Werfel-Human Rights Award includes ? 10,000 of prize money. It is awarded in the Paulskirche in Frankfurt/ every two years. It was awarded for the first time on 29.6.2003.

“Baby shoe” description: this shoe was found by the writer Armin T.Wegner in 1915 on the side of a street, in where deported Armenians passed.