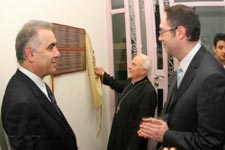 On Tuesday, the 3rd of April, 2007, at 7:30 pm, the opening ceremony of “Jean Farajian” Student Auditorium, constructed by the joint help of the United Armenian Fund, the Lincy Foundation and the “Robert Boghossian and Sons” Fund, took place.

The ceremony was attended by the President of Directors Committee of the Armenian Catholic Schools, His Excellency Msgr. Vartan Ashkarian, the President of the United Armenian Fund and Vice-Chairman of the Lincy Foundation, Sir. Harut Sassounian, the representative of “Robert Boghossian and Sons” fund, Mr. Albert Boghossian, as well as other representatives of different organizations, Mesrobian teachers and friends.


The Principal of Mesrobian High School, Mr. Gregoire Kaloust gave the opening speech. Mr. Kaloust highly appreciated the role of all those benefactors who, along the years have brought their active participation in the realization of the many developmental projects. He explained that the opening of such an auditorium will allow not only the students but all the members of the school to participate in beneficial lectures, and will also serve as a place for intimate gatherings.

In relation to the naming of the auditorium, Mr. Gregoire Kaloust emphasized the importance of the role played by the late Jean Farajian among the Armenians in Bourj Hammoud, the Armenian Catholic Community, and especially to Mesrobian High School. According to Mr. Kaloust, the auditorium in his name would be an expression of gratitude for the innumerous work done by Jean Farajian for Mesrobian.


Following the opening speech, a slideshow under the title “The Benefactors” was shown, written and directed by Mr. Vartan Tashjian.

When invited to give his word, Mr. Patrick Farajian, son of Jean Farajian, began expressing his gratitude for the attention shown towards his father. He continued by saying that he feels proud for cooperating with the United Armenian Fund. Furthermore, he said that he also feels proud because he was standing before the Mount Ararad monument inside the hall, “where Noah's arch set down”.

In his turn, Sir Harut Sassounian indicated the great help brought by Mr. Gregoire Kaloust, by which the United Armenian Fund was able to aid the Lebanese Armenian schools. Mr. Sassounian ended his words by saying that he and his colleagues feel content and happy by helping the new generation, for today's children will continue the same work that they have started.

The closing speech was addressed by His Excellency Msgr. Vartan Ashkarian, who thanked Sir Harut Sassounian, Mr. Albert Boghossian and the Boghossian family from the heart for their support all through the years.

At the end of the ceremony, the audience was directed to the school's rooftop where the new playground, which was also constructed by the help of the same benefactors, was where the guests were served.