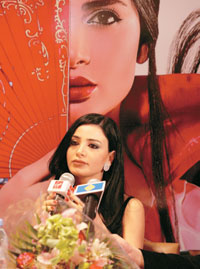 Armenian-Lebanese singer Maria Nalbandian released her latest album “W'regeat thani” at the Virgin Megastore, Mall of the Emirates (Dubai), on 26 March 2007. She was born on August 1, 1983 and began her career as a model when she was 13 years old. She achieved huge success in her modeling career. Maria speaks three languages: Arabic, Armenian and English. Her mother is a poet and father a singer.

She took two years to complete her first music album “Elaab” which was produced by Melody Hits. The album was a big success, especially her first video clip which was directed by Jad Choueiri.

Her latest album has 10 tracks which alternate between crossover pop and melodious ballads. It is sure to appeal to Arabic music lovers in the region and worldwide.

Maria Nalbandian (born August 1, 1983) is a Lebanese singer from Beirut. She is known professionally as Maria. The videos for her songs, including “Elaab” (Let's play) and “Bahibak ad eh” (I love you so much), directed by Jad Choueiri have caused controversy.

Maria has one younger brother who plays guitar. She began her career as a model when she was 13 years old. She worked as a freelancer with many modeling agencies, and did many advertisements which got huge success. She represented Lebanon and was elected as Miss Bikini Asia (2002) at the age of 17.

– You have been absent from the music field for some time. What is the reason behind that?
Believe me I was not away. I was preparing myself for a new and very special start.

– There are some who criticize the kind of art you perform.
I respect all views, either positive or negative, but I refuse the offensive way some try to express their views. This can be attributed to their desire to revenge and their overwhelming feeling of jealousy.

– How do you describe the kind of art that you perform?
Modern and not superficial. It is addressed to the people my generation.

– Some media sources reported that you were sorry for starting your career with the song “Elaab”.
I have not regretted one day for that. “Elaab” has taken me directly to the spotlight in a very short time and I have never denied the role it played in my career.

– What about your new album?
My second album “W'regeat thani” (And I returned back again) is made up of ten songs, written and composed by several prominent individuals. The song is produced by “Melody”.

– You have changed your “look” in your new work.
After considerable thought I chose the Japanese national dress, since it is not much consumed and it expresses me in one way or another. The idea was very beautiful.

– We have learned that you are preparing for many surprises.
I have thousands of surprises, which I do not want to spoil by announcing them. These surprises will surely make my fans happy and will teach the haters a lesson. 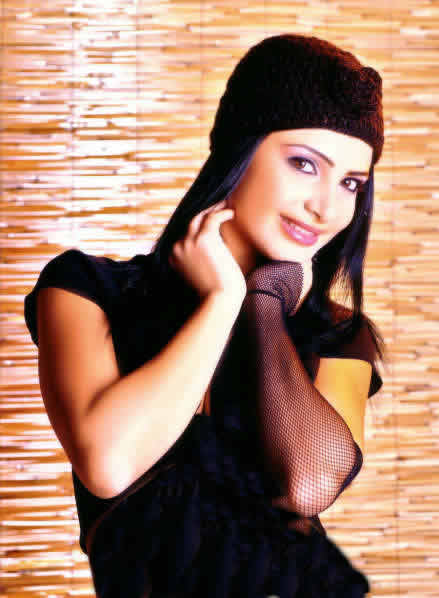 – Your language has not changed. You are still speaking in a “broken” Arabic.
(Bashfully) This is the way Maria is.

– Some mock at your way of speaking.
I respect them, but this is the way I speak and I am not going to change it just to please them.

– But your language has caused you many problems with the Media.
I do not like to talk about past things, but it is worth mentioning here that one of the journalists has changed my words and this has reached the public and especially the Armenians in a wrong way.

– This means that you did not criticize the Armenian people.
(Angrily) And is it possible to criticize them, while I am one of them. My relations with the Armenian public are good. They love me and encourage me. For this purpose I have included one song in Armenian language in my last album (W'regeat thani) as a token of love to my country and my people.