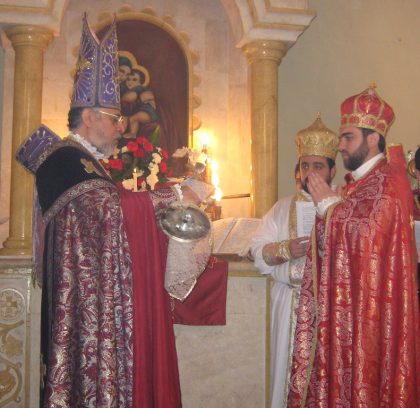 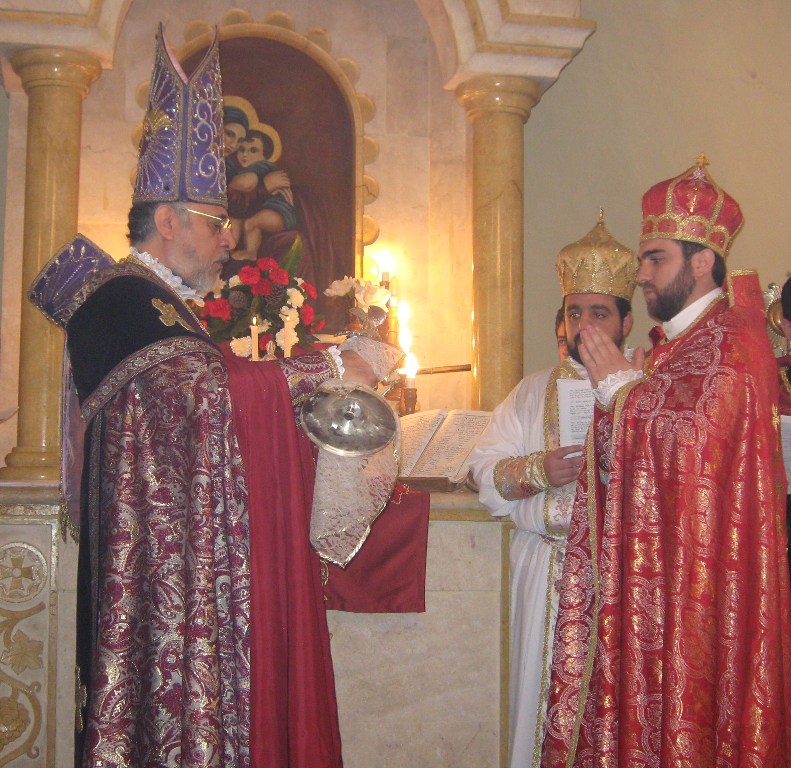 On Saturday and Sunday  7th and 8th of March 2009, deacon Hrayr Bedourian was ordained  a priest. It was  heartwarming indeed  to  see deacon Hrayr turn  into a priest who is ready to serve our Lord Jesus Christ and dedicate his life to  Him. The Armenian town of Kessab (in the North West of Syria) has not witnessed such a touching ceremony for the past 25 years.

On Saturday the 7th of March 2009, in Kessab?s St. Mary?s church (Sourp Asdvadzadzin), it was the deacon?s calling ceremony by the US Eastern Diocese Prelate, His Eminence Archbishop Oshagan Choloyian (previously Prelate of Kuwait and UAE). According to the tradition, the priest-to-be, knelt down and went all the way from the main gate of the church to the choir section  and vowed to be faithful to the Armenian church. As if a breeze of faith had swept the village of kessab.

The sermon was delivered by Archbishop Oshagan Choloyian, who had come from the USA specially to attend and perform the anointment. Along the Holy Mass, the Saghmos Choir was performing the beautiful hymns under the baton of Mrs. Kayane Simonian-Derian.

After a prayer, the deacon proceeded to the altar on his knees, where the  anointer blessed him with God?s  grace and announced that he had indeed become a priest and that he well deserved it.

Then, it was the moment for him to leave the secular life behind and dedicate himself fully to God. Archbishop Choloyan then anointed him with the holy water reciting the words “I blessed, anointed and cleansed our priest Der Karekin ?“.

The newly ordained priest  turned to the believers who had crowded the church and gave them his blessing, first thanking God and then wishing that peace may prevail everywhere.

Then, the anointer addressed Deacon Hrayr saying that “From now on, you too are a preacher and you will be talking like God, by preaching his word, you will thus illuminate people?s  souls and thoughts  with the divine truth?.”

He added saying that : “I have given you a new name, so you?d become a new person, a person who is wholly dedicated to God. You have been named Karekin after this town?s beloved son the Catholicos of Cilicia and later of All Armenians Karekin. You will sure be worthy of the name when you lead an ethical life, study the Bible and expand your knowledge?”

At the end of the ceremony, there was a  banquet, during which, the newly ordained priest addressed the guests saying that “my heart and my soul are thrilled because of this turning point in my life. I thank God for having made me worthy of his blessing, and as I vowed in front of you all, I will serve God, my church and my nation and live a good life until the day I die… I am sure that the late Catholicos Karekin is looking down on us feeling exhilarated for our town Kessab?.” And he ended his speech by thanking all those who have been a great help to him for the Holy mission he has chosen, especially his spiritual father ? HE Archbishop Oshagan Choloyian, his godfather Sebouh Manjikian, his own parents and all villagers.

We ask God to bless Father Karekin  and give him the strength to overcome all the obstacles  that might face him and to strengthen  our church and nation with fine prelates.

The above article (Armenian and English) is sponsored by Hratch Brunsuzian (UAE) as part of Sponsor an Article project.