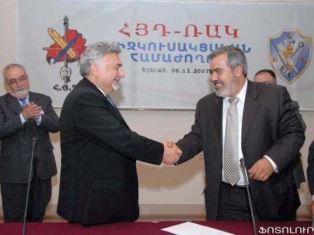 The Armenian Revolutionary Federation (ARF / Tashnagtsutiun) and the Armenian Democratic Liberal Party (ADLP / Ramgavar) reach agreement over issues of much importance for Armenia, despite of the ideological difference between the two traditional Armenian parties. The conference was held on 6 November 2007 in Ani Plaza Hotel, Yerevan. Representatives from Armenia and the Diaspora took part in it.??
?
According to ARF politician Giro Manoyan it is no use arguing over socialist or liberal ideas, but there are issues around which the views of the two parties coincide. In particular, strengthening the rule of democracy in Armenia, introducing independent judicial system and eliminating monopolies in the economy.
?
The inter-party conference followed a meeting in Paris in April this year between the three Armenian traditional parties (including Social Democratic Hunchak Party / SDHP), which highlighted the need for further coordination between these parties with significant followers in the Diaspora.
?
ARF and ADLP reached agreement over the main issues on conference's agenda. Artsakh and Javakhk problems, recognition of the Armenian Genocide and demands to Turkey, Armenia-Diaspora relations were among these issues.
?
According to Manoyan, deepening of relations between the three parties is also important for achieving consolidation and harmony in the Diaspora, a measure necessary for resisting in facing the existing challenges. According to him, some communities, for instance, the Armenian community in Lebanon, may appear in a crisis situation due to the prevailing political instability in that country.
?
Touching upon Armenia-Diaspora relations, Manoyan said that Armenia is the homeland of all Armenians, and this should be enhanced by the law. The use of the law on dual citizenship will not only facilitate Diasporan Armenians' visits to the homeland, but also will give many people the opportunity of repatriation. There is also a proposal to create a Diaspora affairs ministry in Armenia.
?
Hrant Markarian, ARF Bureau Representative, said in his interview to journalists, relations between his party and the Ramgavar-Azadagan Party were strained for a very long time and if the two traditional parties are able to reach agreement over issues of much importance for the nation, this mu 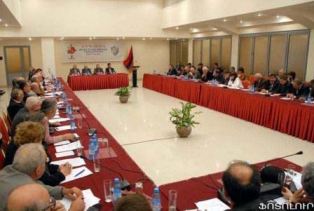 st be an example for other forces working in the Armenian political sphere. He expressed the hope that the Social-Democratic Hunchak Party will also take part in the intra-party conferences to be held in the future.
In response to the question of whether he considers possible the Armenian National Movement's (ANM) participation in such conferences, Markarian said that it will depend on that party's position over the Nagorno Karabakh problem.
?
“We are the participants and witnesses of an unprecedented meeting: Armenian classical parties gather in Yerevan for the first time in Armenia's history to jointly plan and complement issues like the Armenian Cause, international recognition of the Armenian Genocide, the settlement of the Artsakh conflict, enhancement of Armenia's international image and defence of the righst of Armenians,” ADLP's Central Board Chairman Mike Kharabian said.
?
Sources: Noyan Tapan, Yerkir, Azad-Hye (06 November 2007)?