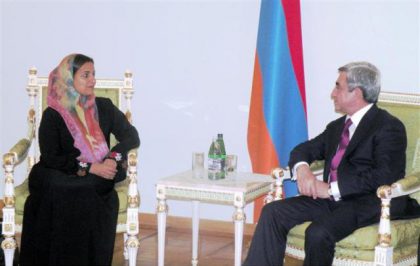 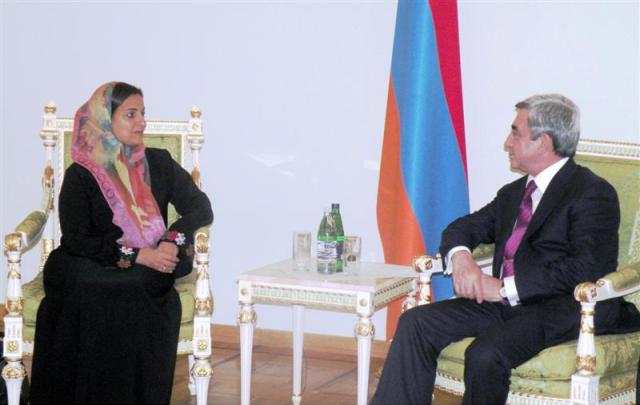 “The Armenian residents practice their faith in their own churches in the UAE with full freedom and diligently work in a society reliant on diligence and innovation,” said Sheikha Lubna Al Qasimi.

Shiekha Lubna Bint Khaled Al Qasimi, Minister of Foreign Trade, visited Armenia from the 2nd to the 5th of November 2010, heading a delegation comprised of 50 public and private sector representatives from governmental and federal entities, chambers of industry and commerce, and private corporations.

The visit aimed at boosting UAE-Armenian commercial cooperation and promoting the economic, commercial and investment opportunities that are available in the United Arab Emirates.

Shiekha Lubna said that although commercial cooperation between the UAE and Armenia is currently limited, valued at AED 256 Million in 2009, the rapid economic growth witnessed in both countries makes it possible to greatly increase the volume of commercial exchange and investments. She pointed out to the importance of searching for new and advanced mechanisms to encourage commerce between both countries especially that Armenia has an emerging and open-market economy that is in need of a lot of merchandise; such as capital and consumer goods, especially electronic appliances. She pointed out to the importance of constant communication between the governments of the UAE and Armenia and increasing effective meetings between investors and businessmen from both countries. She added that the presence of many members of the private sector among the UAE delegation contributed towards strengthening the levels of cooperation between the business communities of both countries.

Sheikha lubna underlined the UAE's unique geographic position, highlighting the incentives being offered to investors and the advanced competitive services that are available at UAE ports, which Armenia can benefit from through re-exports and the easy access of big regional and Asian markets.

During her visit, Sheikha Lubna met with high ranking officials and a number of Armenian ministers and the representatives of various commercial and economic entities. Accompanying Sheikha Lubna were representatives from the Abu Dhabi Department of Economic Development, the Mubadala Development Company, the Free Zone Authorities in Sharjah, Fujairah and Dubai Airport, the Federation of UAE Chambers of Commerce and Industry, and a number of UAE SME-related organizations, entrepreneurs, local banks, construction, real-estate, communications and pharmaceutical companies.

On 03 November 2010, Sheikha Lubna Al Qassimi and Armenian Prime Minister Tigran Sargsyan have discussed trade and investments relations between their two countries. Sheikha Lubna said that her current visit will assist in realizing the outcome of her previous visit to Armenia into joint investments by the private sectors in both countries.

For his part, Prime Minister Sargsyan expressed his government's interest in providing all facilities and incentives for UAE companies and investors willing to tap investment potentials and tens of projects in infrastructure, agricultural reclamation, water and food industry.

Later, Sheikha Lubna met with Armenian deputy prime minister Armen Gevorgyan. In remarks at the meeting, Gevorgyan said the UAE is prioritized by the Armenian government's plans to expand cooperation with the Arabian Gulf region. He further urged UAE companies to tap opportunities provided by the Armenian economy in renewable energy and technology as well as the logistic hub set up by the government to support agriculture.

On the same day the UAE- Armenia business forum was opened in Yerevan by Sheikha Lubna Al Qassimi and Prime Minister Tigran Sargsyan in presence of senior officials and business leaders from both countries. In a speech at the opening ceremony, Sheikha Lubna said the last few months saw significant growth in trade exchange and cooperation with Armenia, more exchange of official visits as well as the signing of a number of agreements. “The time is ripe for moving the relations into new venues as both countries have a chance for strengthening their roles in the global economy in the post-recovery era,” she noted.

“For the first time, non-oil sectors accounted for 71% of the UAE's GDP, up from 63% in 2008, a surge which reflects the UAE's economic strategy for expansion into new sectors such as manufacturing, alternative energy, technology and tourism,” Sheikha Lubna said, noting that alternative energy in particular is among the UAE's major targeted sources for sustainable and clean energy. Stressing that the UAE is now the Middle East's first commercial hub and among the world's 16th top exporter and also the region's top destination for FDI, the Minister urged Armenian businesses and investors to set boost their investments in the UAE and enter into joint projects with UAE counterparts.

For his part, Sargsyan welcomed UAE investments to Armenia and stressed his government's preparedness to provide all facilities and incentives for UAE companies. The opening of the forum was followed by a presentation by the Armenian Minister of Economy on his country's investment potentials. Some UAE economic officials also gave presentations on investment potentials in the UAE.

Meeting with the Speaker of the National Assembly

In another audience, Sheikha Lubna discussed with Edward Nalbandian, Armenia's Foreign Minister, ways to develop bilateral relations between the UAE and Armenia. She explained that the UAE's policy of diversifying its economy and sources of income has achieved more positive results than expected as the contribution of non-oil sectors has increased.

For his part, Minister of Foreign Affairs of Armenia said that his country is proud of the friendly relations with the UAE.

On 04 November 2010, Sheikha Lubna Al Qasimi visited Yerevan State University. As Rector Aram Simonyan was on an official visit to Kuwait, the Minister met with Vice-rectors Gegham Gevorgyan and Ruben Markosyan. Right after the meeting with the executives she met with students and lecturers of the Faculty of Oriental Studies.

Sheikha Lubna Al Qasimi delivered a short lecture, which briefly introduced the economic situation in the UAE. The Minister noted that the years of study are one of the most active stages of life. She said it is very important to realize the right choice of specialization, which can benefit the person, family and environment, but also the country. Positions on certain issues were expressed not only by the minister but also by members of the accompanying delegation. Sheikha Lubna Al Qasimi is Board member of numerous international trade and economic institutions. She has a number of international awards, and today one more award was added. The Academic Council of Yerevan State University awarded her YSU's silver medal for productive social, political activity and the development of relations between Armenia and the UAE.

On 05 November 2010 Sheikha Lubna Al Qasimi visited Saint Echmiadzin and met with His Holiness Karekin II, Supreme Patriarch and Catholicos of All Armenians. She stressed that the UAE has always encouraged religious, cultural and racial diversity and peaceful co-existence and mutual respect and has shown itself to be a role model for religious tolerance. The UAE plays a vital role in establishing regional and international stability and supporting humanitarian and development efforts across the world, Al-Qassimi further noted adding that the UAE hosts a diverse mix of 180 nationalities.

“The Armenian residents practice their faith in their own churches in the UAE with full freedom and diligently work in a society reliant on diligence and innovation,” Sheikha Lubna said during the meeting with the Catholicos.

Catholicos Karekin II hailed UAE's efforts to foster interaction among various faiths and openness to the world. “During my last visit to Sharjah, I got a first-hand experience of the tolerance and peaceful coexistence which the Armenian community in the UAE enjoy,” His Holiness said.

On 06 November 2010 President Serzh Sargsyan has received the UAE Foreign Trade Minister Sheikha Lubna Al Qasimi in Yerevan. During the meeting they discussed the bilateral relations and ways to bolster them, especially in the areas of trade and investment. Sheikha Lubna conveyed the regards of President H.H. Sheikh Khalifa bin Zayed Al Nahyan to President Sargsyan. In turn the Armenian President conveyed his regards to the UAE President, stressing the friendship and respect between the two peoples.

The Armenian President highlighted the importance of conducting the first business conference between the two sides, welcoming the visit of the UAE Minister for Foreign Trade. He described the first business conference as a promising beginning for efficient cooperation. Sheikha Lubna said a number of agreements and memorandums of understanding have been signed between the UAE and Armenian companies.

During most of the above meetings Sheikha Lubna Al Qasimi was accompanied by Ambassador of Armenia in UAE H.E. Vahagn Melikian and First Secretary of the Embassy of the Republic of Armenia Mr. Mher Mkrtumyan.