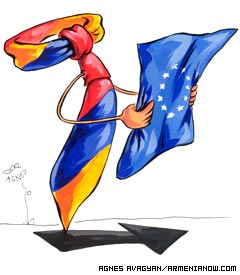 Some younger Armenians don't see EU membership in the cards

Varazdat Ghazaryan is like many young Armenians when asked about the possibility of his country one day becoming part of the expanding European – he doesn't see it happening anytime soon.

year-old entry-level sports commentator and football referee. “ is out

of the universe,” Ghazaryan said.

After a decade of expansion and growing political and economic integration, the 25-nation EU is now testing the limits of its borders. began talks on joining last year, triggering widespread debate about whether the majority Muslim country is “European” enough to join its neighbors.

and are in line to be the next EU member states in 2007, while governments in and have their eyes on the EU prize — a single market for goods, and for younger people, the potential to move freely in the search of education and jobs.

Amalya Mirakhoryan, a 31-year-old secretary, said has not reached the level of European countries, which she says are more progressive in their politics and lifestyle.

“Once you walk the streets of , you understand that we've got nothing to do in the European Union,” she said.

Among the younger proponents of EU membership who were interviewed for this story, many shared Mirakhoryan's viewpoint. But others questioned whether the EU can weather some of its own problems, including the defeat last year of the union's constitutional treaty by French and Dutch voters.

“I don't even see any EU in the future, say, in 50 years because the structure's already going down today. And generally speaking, the EU is not

what we should be heading for,” says Sona Grigoryan, a 21-year-old student at 's faculty of Oriental studies.

Despite such skepticism, has moved closer to economically and politically since independence in 1991. The EU has replaced as 's primary trading partner. The nation joined the Council of Europe – a group of 46 member nations that promotes human rights and democracy but is separate from the EU – in 2001, and has since ratified important European human rights agreements.

“Naturally, the fulfillment of CoE commitments imposed on helps this country to get closer to the EU,” says Bojana Urumova, the Council of Europe Secretary General Special Representative in . “The political and democratic criteria for membership are the same in both organizations.”

prevention of torture, the economy falls short of EU standards.

“To become a member, must have a competitive economy and create?a healthy competition field for economic activity,” said Tatoul Manaseryan, an economist and a deputy of the National Assembly. “In this regard political will is necessary in order to pass from clan economy to healthy competitive trade relations.”

Manaseryan said that if is able to realize its scientific potential and make use of the economic capabilities of the Armenian Diaspora, then the nation could meet the EU's economic criteria.

But talk of European cooperation and its patchwork of agreements and institutions confuse some younger Armenians.

“And I thought we're in there already,” said Zhanna Gevorgyan, a 19-year-old student at the who expressed surprise when explained that the EU and the Council of Europe are different structures.?

URL of the article: