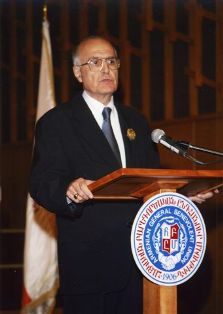 A program honoring Zaven Messerlian, dedicated and beloved principal, teacher and historian, took place on Friday, August 17, 2007 at the Alex Manoogian Center in Pasadena, California (United States of America), with over 600 people in attendance.

The organizer of this program was the Armenian General Benevolent Union's (AGBU) Southern California District Committee. Among those that attended the event were: Archbishop Hovnan Derderian, Primate of the Western Diocese of the Armenian Church of North America; Reverend Joseph Matossian; Very Rev. Bared Yeretzian, pastor of St. Gregory the Illuminator Church in Pasadena; representatives of various political and other organizations; former teachers and students of the Armenian Evangelical College.

In his opening remarks, Master of Ceremonies Dr. Kevork Keshishian described Dr. Messerlian's virtues, characterizing him as an individual having rendered services as a public figure, intellectual and educator for many years. Indeed, the honoree has been indefatigably devoted to the Armenian people, Church and the Armenian Evangelical College for the past 40 years.

Subsequently, salutations were given by Janet Kassouny, Dr. Vicken Aharonian, Panos Titizian and Prof. Richard Hovannisian. All the speakers expressed appreciation for the systematic and beneficial work performed by the honoree in the educational and cultural realms, as well as his efforts in pursuit of the Armenian Case and the leadership
provided in various organizations and institutions.

High praise was also expressed for his scholarly publications and letters in connection with the Armenian Case and recognition of the Armenian Genocide. 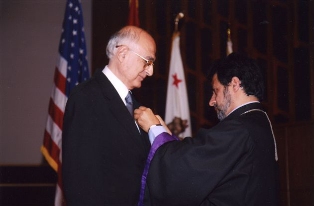 Concluding remarks were offered by Archbishop Derderian, who, in turn, held the productive activity and prolific output of honoree Dr. Messerlian in high regard. Then he gladly announced that His Holiness Karekin II, Catholicos of All Armenians, had awarded the honoree with the St. Sahag-St. Mesrob Medal.

Zaven Messerlian, visibly moved, expressed his thanks and gratitude to Catholicos Karekin II, Archbishop Derderian, AGBU President Berge Setrakian and all those who made this memorable occasion possible.

This article was translated by AGBU from the Armenian-language text, which appeared under the initials K.M. in the August 25, 2007 issue of Massis weekly. 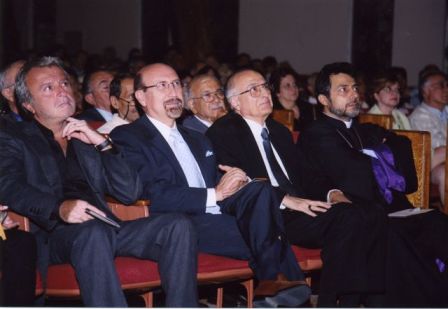