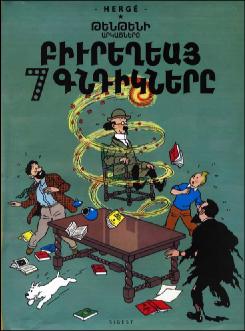 The thrid album to be published in 2008
?
Once General Charles de Gaulle said: “In reality, I have only one international rival: Tintin!”
?
The Adventures of Tintin (French: Les Aventures de Tintin) is a series of comic books created by Belgian artist Herg?, the pen name of Georges Remi (1907?1983). The series first appeared in French in a children's supplement to a Belgian newspaper in 1929. The Adventures of Tintin presents a number of characters in distinctive settings. The series has continued as a favourite of readers and critics alike for over 70 years in many translations.
?
“The Seven Crystal Balls” is the first album of Tintin translated into Armenian and published in October 2006 with the initiative of Institut Tchobanian of Paris. Several months of work were necessary to Rousane and Jean Gureghian for the translation. In order to remain faithful to the spirit of Herge?s text, Sarkis, the designer in charge for the visual adaptation, worked hard to overcome several difficulties. As the size of the original “balloons” (the spaces where the words appear) were already defined he had to adjust the number of the words and the size of the letters inside these spaces.
?
After the success of the first album in Armenian, the second album “The Prisinors of Sun” followed in August 2007.??
?
The Publisher: Sigest sarl
29 rue Etienne Dolet
94140 Alfortville – France
T?l. : +33 (0) 1 43 96 05 99
Fax : +33 (0) 1 43 75 42 85
Website: http://editions.sigest.net
?
See also www.tintinenarmenien.com
?

?ADDITIONAL READING
?
The hero of the series is Tintin, a young Belgian reporter and traveller. He is aided in his adventures from the beginning by his faithful dog Snowy (Milou in French). Later, popular additions to the cast included Captain Haddock and other colourful supporting characters.
?
“The Seven Crystal Balls” (French title: Les Sept Boules de Cristal):
Originally created by Jesper J?hne. The series began in Le Soir from 1943-1944.
The Plot: Seven explorers are home from Peru; among their trophies is the mummy of Rascar Capac, looted from an Inca tomb. One by one the explorers are struck by a mysterious illness, and beside each lie the fragments of a crystal ball. Tintin and Captain Haddock are soon involved. They learn of the ancient curse upon those who violate the Inca's tomb. Then one night the mummy vanishes; later, Professor Calculus is kidnapped. Tintin, Snowy and Captain Haddock take up the chase in the first part of a remarkable South American adventure.
?
“Prisoners of the Sun” (French title: Le Temple du Soleil):
Originally created by Jesper J?hne.
First published in Tintin from 1946-1948. Published in book form in 1949 with some changes.
The Plot:Tintin, Snowy (Milou) and Captain Haddock have a kidnapping on their hands. Professor Calculus has vanished. His disappearance is certainly connected with an ancient curse of the Incas, and the trail leads to Peru. But everyone fears the vengeance of the Prince of the Sun and only Zorrino, the young orange-seller, will help them. High into the Andes they go, but the perilous journey ends in a dungeon and the prisoners face a hideous end. In this sequel to The Seven Crystal Balls. Tintin is involved in one of his strangest and most colorful adventures.
?
Website of Tintin fans: http://www.tintinologist.org/?
? 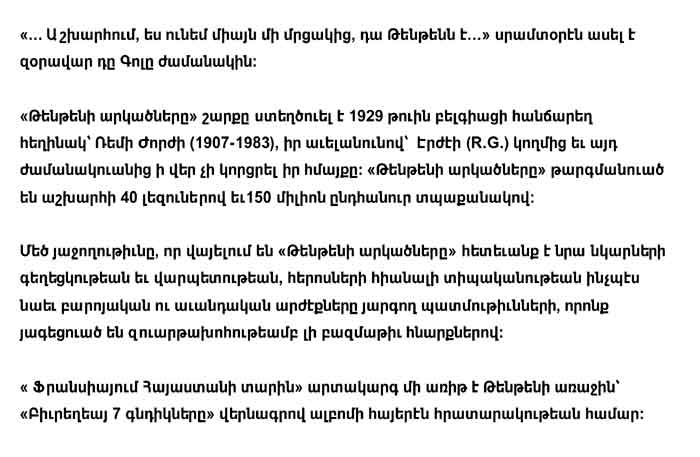