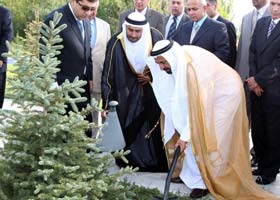 AZAD-HYE (Dubai, 24 September 2005): The Armenian ? UAE relations witnessed a great stride forward owing to the successful 3 days official visit of His Highness Sheikh Dr. Sultan bin Mohammed Al Qasimi, Member of the UAE Supreme Council and Ruler of the Emirates of Sharjah to Armenia, during which he inaugurated the Sharjah Cultural Week (Yerevan, 19-22 September 2005) in the National Art Gallery of Armenia.

Activities of the cultural week included an exhibition of modern arts (paintings of 22 UAE artists courtesy of the Sharjah Museum of Arab Modern Art); exhibition of antiquities excavated in the area surrounding Sharjah; exhibition of heritage items displaying way of life in the desert environment (handcraft items, costumes, traditional medicine), exhibition of award winning samples of Arab calligraphy. During the opening ceremony a Sharjah folkloric group of 10 performers greeted the guests and the public. The second day of the exhibition included theatrical performance by the group of Sharjah National Theatre.

The program of the UAE cultural and official delegations was very extensive. Besides the official meetings with the head of the State, the Prime Minister and several Ministers, the delegates visited many remarkable places, including the , the , of , National Academy of Sciences, , , Children's Art Museum. Members of the cultural delegation were invited to a morning program on the Armenian public TV. It is worth mentioning that the Cultural Week is part of a bilateral protocol that has been signed during the visit of 's Minister of Culture and Youth to Sharjah last December.

Before the arrival of Sheikh Dr. Sultan Al Qasimi, the Armenian Minister of Culture Hovik Hoveyan had the chance to meet with the General Director of the Sharjah Department of Culture and Information Abdullah Mohammed Al Oueis, who had arrived few days earlier, in order to arrange for the opening ceremony.

Heading the UAE cultural delegation Al Oueis visited the Marz (Province) of Armavir, some 50 kilometers away from the capital Yerevan, where the Mayor welcomed the delegation and expressed gratitude to the Arab people who supported the Armenians during the difficult period of 1915-1923 (Armenian Genocide) and he said: “The Armenian – Arab relations have a history going back thousands of years. There are many common elements in our cultures, in music, arts, traditions etc. We have achieved in Armavir splendid relations with the Arab World and we intend to build on our friendship and to further develop these ties”. Mr. Al Oueis was given a painting representing , the symbolic mount of the Armenians.

In the evening of the same day Sheikh Dr. Al Qasimi inaugurated the Sharjah Cultural Week in . The program is part of Sharjah's plan to establish cultural interaction with peoples of the World, especially with countries that have long lasting relationship with the Arab World. The aim of these activities is to reflect the image of Sharjah as a cultural hub and a capital of the Arab culture.

During the opening ceremony of the Sharjah Cultural Week, Sheikh Dr. Sultan Al Qasimi, Ruler of Sharjah congratulated the Armenian people for the Independence Day. He pronounced that it is highly symbolic that the conduction of the UAE cultural days coincides with this dear occasion. He expressed the wish that overcomes the existing difficulties and takes the path towards full economic development. He highly appreciated the initiative of the Armenian Government to organize the Armenian Cultural Days in Sharjah (December 2004), which resulted in achieving even closer relations between the two sides and introduced to the general public in his country. He stressed that the Sharjah authorities did not want to miss the opportunity of arranging these cultural days in , although parallel exhibitions are taking place in and , which needed also some attention. He promised to organize a larger exhibition in the future and said that the coming months will witness more extensive cooperation in cultural and other fields between Sharjah and .

The inauguration ceremony was attended by the Armenian Deputy Prime Minister Hovik Abrahamian, Deputy Foreign Minister Kegam Gharibjanian (former Ambassador of Armenia to Iran and Qatar), Minister of Culture and Youth Affairs Hovik Hoveyan (who has attended the Armenian Cultural Week in December 2004 in Sharjah) and a number of UAE officials and press representatives.

The highlight of the day was the meeting of Sheikh Dr. Sultan Al Qasimi with President Robert Kocharian. The President decorated the precious guest with the “Saint Mesrob Mashtots” Order, one of the highest orders in , in recognition of his contribution to the UAE-Armenian relations, in addition to his role in the fields of education and culture. They discussed ways of promoting bilateral relations between the two countries.

During the second day of his visit to , on 20th September 2005, Sheikh Dr. Al Qasimi met with Armenian Prime Minister Andranik Markarian, who stressed that Sheikh Sultan's visit to is a significant move towards strengthening the bilateral ties. The meeting was attended by the Chief of the Sheikh's Office (Isam bin Saqr Al Qasimi), the Director of the Emiri Court (Rashid Ahmed Al Sheikh), Director of Sharjah Islamic Endowment Authority / Awqaf (Jamal Salim Al Taraifi) and UAE non-resident Ambassador to Armenia (Khalifa Shaheen Al Merri).

In a separate meeting in the of Sciences, the President of the Academy Fadey Sarkissian praised Sheikh Dr. Al Qasimi for his contribution to the development of science and culture in the UAE and in the Arab World in general. It should be mentioned that UNSESCO had chosen Sharjah as the Arab Cultural Capital for the year 1998. Sheikh Dr. Al Qasimi was awarded honorary doctorate from the National Academy of Sciences in in recognition of his contributions to the cultural and intellectual activities across the world. This honorary title has been conferred so far to a limited number of 60 personalities worldwide. Ambassador of in the UAE Dr. Arshak Poladian praised the Sheikh for his efforts to turn Sharjah into a center of cultural and scientific advancement in the Arab World. Sheikh Dr. Al Qasimi, who is also the Chancellor of the of Sharjah and the , thanked the Academy and stressed that Sharjah will continue to attract institutions of higher education and Universities of worldwide fame.

On the same day awarded its Golden Medal to Sheikh Dr. Al Qasimi. Speaking at the awarding 's Rector Radik Martirosyan said that Sheikh Al Qasimi is a great friend of the University. Sheikh Dr. Al Qasimi granted a seat for Arab studies in the Faculty of Oriental Studies. He expressed his happiness that the Department of the Arab Studies within this Faculty has more than 300 students. (Click Read More)

On the same day he visited the and planted a tree of UAE-Arab friendship. He visited the Museum and witnessed the sorrow and grief that war has cause to the Armenians. He placed flowers on the monument of the victims and ended his visit to the museum wishing that love and peace would prevail in the world.

Sheikh Dr. Sultan Al Qasimi found time to visit also , one of the highest lakes in the world, from where Hrazdan river is originated, a main source of irrigation in . The Mayor of Tavoush Marz (Province) welcomed the guest and soon after the official lunch they headed to Dilijan, one of the finest resorts in , where some of the houses date to centuries back. He also visited the .

Back in Yerevan His Highness attended in the equestrian club of Hovig Hairapetian a live show of the four horses that he presented as a gift to the Government of Armenia. He expressed satisfaction that the horses are in safe hands and under the care of people who adore horses.

The third day was full of local cultural activities. Sheikh Al Qasimi did not miss the chance to visit the famous Matenadaran (the depository of ancient Armenian manuscript). He was impressed by the huge number of manuscripts in the Matenadaran (total number 17.000 manuscripts, 700 of them in Arabic). The Director of Matenadaran Sen Arevshatian presented him a book on horse breeding.

During his visit to Matendaran Dr. Sheikh Sultan Al Qasimi declared that a UAE delegation will visit next week. He stressed that, issues of deepening bilateral cooperation in economy, science and culture will be discussed during this upcoming visit of the delegation.